Sneakerheads love the company's shoes, and investors love the stock. Should you follow the crowd?

If you had invested $1,000 in the stock of Nike (NKE) in 1984 during Michael Jordan's rookie season, you would now have $969,000 with dividends reinvested. In hindsight, signing Michael Jordan was a major turning point for Nike. The Jordan brand generates around 10% of its annual revenue, and popular styles of Air Jordan sneakers still sell out on the day of release, even though Jordan hung up his uniform 16 years ago.

Investors are very bullish on the company. Top athletic apparel stocks have outperformed the broader retail sector in recent years. Investors continue to like the growth prospects of the leaders, including Nike, with the share price up 15% year to date and sitting at an all-time high.

Should investors take the plunge now, or wait for better prices? Let's take a look. 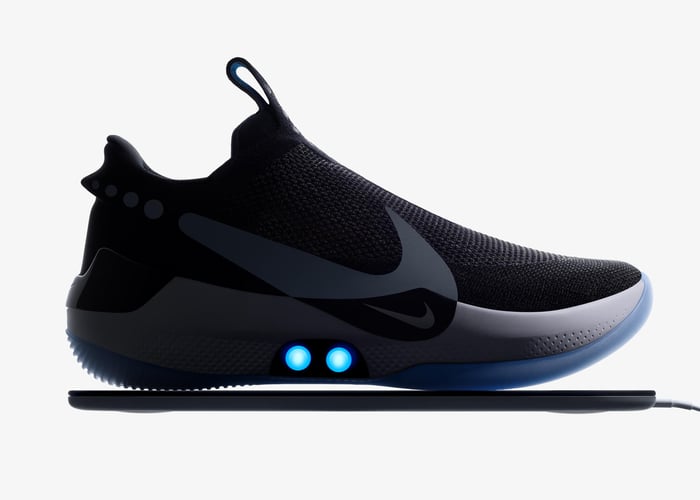 Nike stock has delivered a return of more than 600% over the last 10 years. In the last five, the stock has more than doubled. While Nike's revenue and earnings growth can explain some of that performance, the valuation on the shares has stretched to the high end of the historical range, which has given investors an additional boost to their return.

No matter which metric you look at -- price to earnings, price to free cash flow, or price to sales -- Nike is far from cheap. This isn't surprising given the company's recent performance.

In December, Nike reported its best fiscal second quarter since fiscal 2015. Both footwear (two-thirds of revenue) and apparel performed exceptionally well for a company that generates $38 billion in annual revenue. But most important of all, the company showed it is successfully defending its home turf against the onslaught of Adidas, with North America revenue growth accelerating to 9% year over year.

Like clockwork, Wall Street analysts began upgrading the stock. Expectations are high, so the question is: Can Nike maintain its current momentum?

The main reason for the bullishness around Nike stock is that investors see room for further improvement.

First, there is momentum throughout the broader athletic apparel industry. The athleisure trend has taken on a life of its own. It's long past being a fad, as many were calling it five years ago. Strong demand for athletic wear is fueling sales of both apparel and footwear. In the fiscal second quarter, Nike footwear and apparel sales increased by 15% and 14% year over year, respectively, adjusted for currency.

Nike is innovating and releasing new sneaker styles at record speed, and it's not just to meet the demand for performance, but also to satisfy customers' appetite for lifestyle wear. Plus, more sales are happening through Nike.com and the SNKRS app, which is beneficial to margins. Management expects gross margin to expand in the short term based on continued momentum in digital sales, a shift in mix to premium-priced product, and stronger full-price sell-through.

Going by the theory that things eventually revert to the mean, there's clearly the potential for Nike to improve its margins over the next few years, which would help earnings growth. Over the last three years, Nike's gross margin has suffered as Adidas began to take market share in North America with its Boost cushioning technology, which was being featured across its line of basketball, running, and lifestyle shoes. Nike responded by investing heavily in its supply chain, and in 2018 Nike launched Epic React footwear for runners in response to Adidas' Boost.

With the bulk of those investments behind the company, Nike's gross margin could drift back to the mid-40 range over the next few years. As you can see in this chart, gross margin has already started to tick up in the last few quarters. 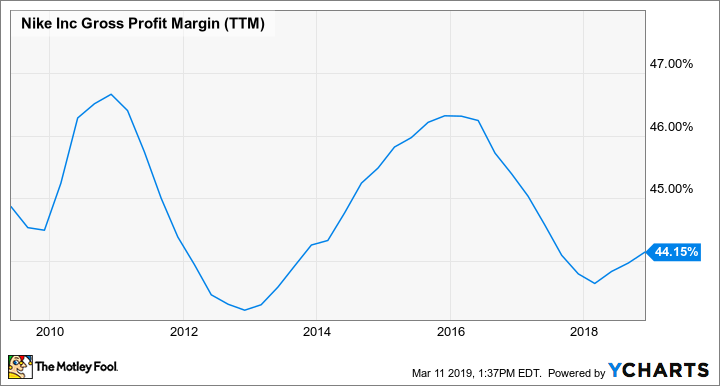 There are no headwinds in Nike's path. The swoosh brand received some negative attention recently when a Paul George 2.5 shoe broke during a Duke basketball game, causing an injury to a very talented player. But investors were quick to shrug off the news, as the shoe sold out quickly and the incident with the Duke player appears to be an isolated occurrence.

Analysts expect Nike to grow revenue by 7.9% in fiscal 2019 and 7.7% in fiscal 2020 (which ends in May). But an improvement in gross margin would allow more profit to drop down to the bottom line. That's part of the reason analysts expect earnings to grow about 14% annually over the next five years.

Is Nike a buy?

It's clear Nike is getting into a groove. It has reasserted itself in the footwear category, and management sees a significant opportunity in apparel, which only makes up a third of annual revenue.

Still, at a forward P/E of 27 times next year's earnings estimates, I would hold off on buying the stock right now. There are stocks out there offering better growth for about the same valuation. For example, analysts expect lululemon athletica to grow earnings about 24% annually over the next five years, but its stock trades for a forward P/E of 32, which is not that much higher than Nike.

Nike is a great stock to own for the long term, but if you want to get the most bang for your buck, I would wait for better prices.

Editor's note: This article has been corrected to note that it was a Paul George 2.5 shoe that broke during a Duke basketball game.