The streaming media device maker has still more than doubled in 2019 after a rough week featuring a pair of analyst downgrades. Chaos is a ladder, Littlefinger says.

One of this year's hottest stocks was also one of last week's biggest losers. Shares of Roku (ROKU -0.05%) tumbled nearly 12% last week, buckling early in the week after a pair of analyst downgrades. Roku continues to be a winner in 2019, up 105% so far this year even after last week's setback.

The Wall Street pros at Loop Capital and Macquarie downgrading the shares on valuation concerns may look reasonable at first glance; Roku hasn't done enough through just the first few weeks of 2019 to justify a valuation of more than twice what it was when the year began. Yet I don't see it that way. Let's go over the reasons why Roku will get the last laugh when it bounces back from last week's slide. 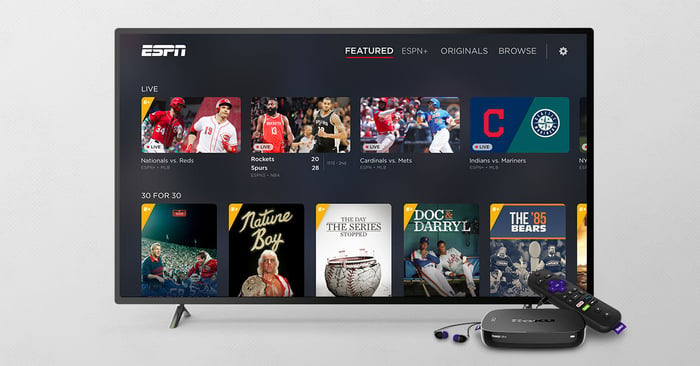 One can argue that Roku's stock has overshot its fundamentals by more than doubling so far in 2019, but why make Dec. 31, 2018 the somewhat arbitrary starting point? Roku closed out 2018 at $30.64, but that was its lowest monthly close in more than a year. The stock shed more than half of its value in the fourth quarter of last year. Roku stock was lower at the time of last week's analyst downgrades than it was at the end of the third quarter of last year.

In short, the stock may have been optimistically priced at the end of September when it was peaking, but after it lost 58% of its value in the final three months of last year, how can one say that there wasn't too much pessimism baked into its year-end closing price? Roku is a volatile stock, and there will always be two sides to every rally and sell-off.

2. The trends continue to validate the platform

Bucking the downgrades, Laura Martin at Needham lifted her price target on Roku shares from $65 to $85 following the company's initial sell-off last week. The move helped the shares stage a mild rebound during the latter part of last week. Naysayers can point out that Martin also boosted her price target to $85 back in early October -- only to get burned -- but she's been one of the more bullish voices on Roku who's been right a lot more than she's been wrong.

Roku's business is in a great place. Through its namesake devices, but also its partnerships with nine makers of smart televisions, Roku's operating system is the way a fast-growing number of families are streaming video in the living room. Roku ended 2018 with 27.1 million active accounts on its platform, 40% more than it was entertaining a year earlier. That's good, but what makes Roku great is that average revenue per user has risen 30% over the past year, and that's revenue stacked on top of the account growth.

The platform is sticky. Folks streamed 7.3 billion of hours of content through Roku in the fourth quarter, 69% ahead of where it was a year earlier.

3. Fears of competition are overblown

Valuation was the primary concern of the analysts at Loop Capital and Macquarie, but both Wall Street pros also singled out the threat of new services competing with Roku. New rivals may seem to be a challenge for Roku, but in the past that's been an opportunity. Tech and media giants rolling out branded streaming services actually benefits Roku, as new offerings will be nuts if they don't make themselves available on Roku.

The future will be one in which folks cherry-pick among several video services in lieu of fat cable and satellite television bills. Roku will benefit from the glut of players, especially as the services pay Roku to promote their services to potential subscribers. With its audience and engagement growing, Roku is an ally -- not an enemy -- to new and existing premium services. It will easily top $1 billion in revenue this year, and the existence of more streaming services is actually great news for a catch-all hub like Roku.