Please ensure Javascript is enabled for purposes of website accessibility
Log In Help Join The Motley Fool
Free Article Join Over 1 Million Premium Members And Get More In-Depth Stock Guidance and Research
By Ashraf Eassa - Updated Apr 14, 2019 at 10:15AM

This hot chipmaker looks set to profit off of growth in the data center, automotive, and communications infrastructure markets.

One chip company that has garnered a lot of attention from investors lately is Xilinx (XLNX). Xilinx, which has seen its shares rise nearly 44% year to date, primarily sells chips called field programmable gate arrays, or FPGAs. These chips are unique in that their functionality can be reprogrammed on the fly by customers, which stands in stark contrast to most other chips, whose functionalities are set in stone at the time of production.

In this article I'll go over three of the most compelling long-term growth opportunities ahead of Xilinx. 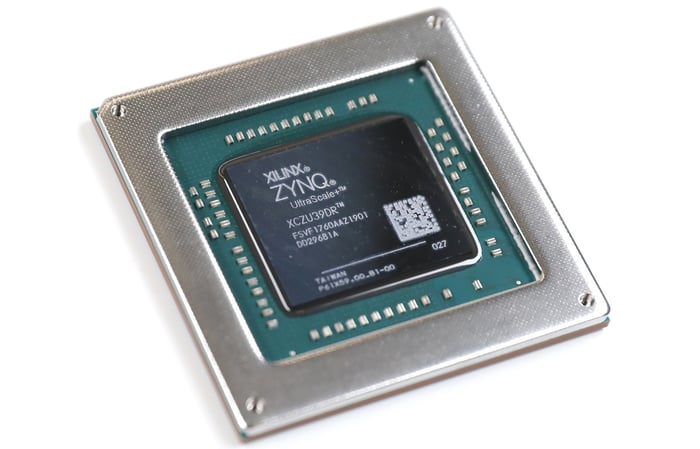 Although its data center segment made up just 21% of its total revenue last quarter, Xilinx isn't shy about the fact that it's a "data center first" company. Digging a bit deeper into the company's 2018 analyst day materials, it's not hard to see why that's the case.

Xilinx's data center revenue is recorded as part of the company's data center and test, measurement, and emulation segment. According to the company's most recent analyst day presentation, the total addressable market (TAM) for that segment is set to grow from $2.3 billion in fiscal 2019 to an eye-popping $6.6 billion by fiscal 2023. The data center-specific part of that segment, per the company, should see its TAM rise from $600 million at the beginning of that forecast period to $4.6 billion by the end of it. (This also implies relatively modest growth in the test, measurement, and emulation part of that segment's TAM.)

If the market really grows as rapidly as Xilinx thinks it will, then the ballooning TAM should help fuel multiple years of robust growth. So far, the growth here has been solid, with CEO Victor Peng claiming on the company's third-quarter earnings call that its core data center revenue "nearly doubled" year over year.

Check out the latest earnings call transcript for Xilinx.

FPGAs are commonly used in communications infrastructure. In fact, 35% of the company's revenue last quarter came from sales into the communications market, making this its biggest business segment by revenue. Moreover, while the data center represents Xilinx's fastest-growing opportunity, the company still expects communications to represent its largest TAM by fiscal 2023, coming in at $7.3 billion by that time.

In its analyst day presentation, Xilinx cited factors like the growing demand for bandwidth and the increased intelligence of networks as factors that help to expand the communications TAM. The imminent transition to 5G networks, Xilinx claims, is "accelerating the evolution" of communications infrastructure.

What I found particularly interesting is that Xilinx actually presented a case study wherein it helped a major wireless network provider build out a large MIMO radio. According to Xilinx, the company helped to dramatically reduce the number of chips that the customer needed to build that radio, bringing the total chip count from 24 to just four with its integrated RFSoC (this stands for "radio frequency system-on-a-chip").

As a result of that, the customer apparently saw a 50% drop in power consumption and a 77% reduction in physical footprint. On top of all of that? Xilinx claims that its dollar content within the system itself rose by "over 35%."

Xilinx's latest products look poised to bring power and cost savings to the communications infrastructure market -- something that looks like a winning value proposition to me.

Xilinx also seems to be a good automotive chip play, too. According to the company, the proliferation of advanced driver assistance systems (ADAS) is "increasing the need for low latency, power efficient Edge Computing."

The company says that for this market, it's offering its Zynq system-on-a-chip (SoC) solutions "as a scalable platform across a broad base of applications."

On Xilinx's website, the company describes its Zynq-7000 family of chips as being suitable for "highly differentiated designs for a wide range of embedded applications including multi-camera drivers assistance systems and 4K2K Ultra-HDTV."

From a big-picture perspective, though, what you need to know is this: Xilinx expects its automotive TAM to grow from $1.4 billion in fiscal 2019 to $2.7 billion by fiscal 2023 -- an 18% compound annual growth rate. If Xilinx can simply grow with the overall market (assuming the market forecast is in the right range), then that should translate into some pretty nice growth for its automotive efforts.

The love that Xilinx is getting from investors isn't undeserved -- the company is delivering solid growth rates today and the markets that it's counting on to fuel its longer-term growth are large, growing, and seemingly increasingly amenable to FPGAs. The stock isn't terribly cheap right now, trading at just over 36 times the earnings per share (EPS) that analysts think the company will turn in this year. However, this is very much a high-quality company that looks set to deliver solid revenue and EPS growth in the coming years.