Smartphones are the Swiss Army Knife of everyday living. We use them to find restaurants, buy gifts, pitch clients, write proposals, and post to social media -- all while the living room PC gathers dust.

We've seen this coming for a while. PC shipments have declined in each of the past two years, Gartner reports. Mobile device shipments have surged over the same period. Our appetite for handheld computing has never been greater. Look at what Apple (NASDAQ:AAPL) did with the launch of the iPhone 6. The Mac maker sold over 10 million handsets on opening weekend, 1 million more than last year's launch of the 5 series.

Gartner is so sure of our increasing dependence on mobile devices that, in January, the firm predicted that in three years we'll have downloaded mobile apps 268 billion times, creating a $77 billion market. Which stocks are best for investing in this mobile revolution? I like three that haven't moved much so far in 2014. Let's review the business advantages of each. 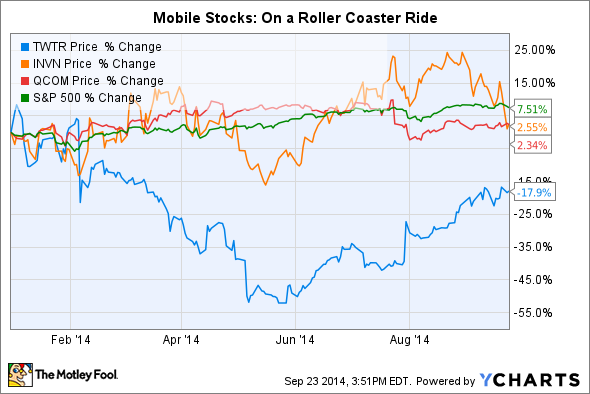 1. QUALCOMM (NASDAQ:QCOM) -- This wireless pioneer now collects over $7 billion in royalty and licensing income each year thanks to a rich portfolio of patents governing how devices connect to 3G and 4G cellular networks. Investors should be able to bank on that income for many more years to come. In the meantime, QUALCOMM is working on breakthroughs that should play a role in the next phase of wireless connectivity.

For example, in April the company introduced Wi-Fi boosting technology called MU-MIMO (pronounced, "moo-my-moh"). The idea? Allow multiple groups to gain simultaneous access to wireless signal at speeds consistent with their usage. Think of it like metering, but with bandwidth going to where it's needed most. More recently, QUALCOMM acquired a chipmaker called Wilocity for bringing gigabit wireless connectivity -- or WiGig -- to business computers. Handhelds could become part of the plan several years from now. Either way, what matters is that QUALCOMM is planning for the future as it profits from the past.

2. InvenSense (NYSE:INVN) -- A sexy stock right now for its role in providing motion processing and image stabilization in the new iPhone 6. No doubt that's a nice win, but the play for investors is much longer term. InvenSense has an 11-year history of designing micro-electro-mechanical systems, or MEMS, for tracking linear and angular movements. Anything that benefits from some form of motion-related input is a target for InvenSense technology.

Think of the first Wii controller. That was such a hit that, at one point, Nintendo accounted for 85% of InvenSense's revenue. Now, tablets and smartphones are using motion control for everything from mapping to gaming with the help of InvenSense gear.

Samsung is a customer. Now Apple is too. And yet, even with those names, CEO Behrooz Abdi estimates that InvenSense technology is embedded in just 5% of mobile phones. Plenty of upside opportunity remains.

3. Twitter (NYSE:TWTR) -- The microblogger doesn't get nearly as much respect as it should. Revenue growth accelerated from 119% in the first quarter to 124% in the second quarter. Both figures are above the company's 3-year average of 118.5%.

Mobile users deserve credit for the gains; 78% of monthly active users engage Twitter via mobile devices. They create lists to filter news by topic. They "favorite" stories to read later. They mute threads that get in the way. And they tune in to television shows with a single click. Twitter is its own fully mobile information economy, and it just got a "buy" button. Call it e-commerce anywhere, tailored to your interests.

What every investor needs to know

Mobile computing is changing all the time. Today's big breakthroughs could be disrupted tomorrow. Is it really safe to bet on these three stocks for the long term? I wouldn't go that far since there's always risk in owning stocks. But we do know that smartphones are getting smarter, tablets are acting more like computers, and consumers are spending more time on mobile devices than PCs.

In short: we're taking our computing with us -- and I expect QUALCOMM, InvenSense, and Twitter to come along for the ride.