There's no way to get around it: Industrial automation company  Rockwell Automation (NYSE:ROK) is in a cyclical business, and history suggests that if the broader economy does slow down dramatically, its prospects will take a hit. Given that most forecasters are expecting, at the very least, a sequential deceleration in U.S. industrial production in 2019 and 2020, it's understandable if investors put Rockwell in the "stocks to avoid" box. However, there are reasons to believe that Rockwell may perform relatively better during that slowdown. Let's take a look at both sides of the story.

Rockwell's sales come from its customers' capital spending, and when the economy slows, the first thing businesses are likely to cut is their expansionary capital spending. That's why its revenue has tended to track the trends in industrial production. 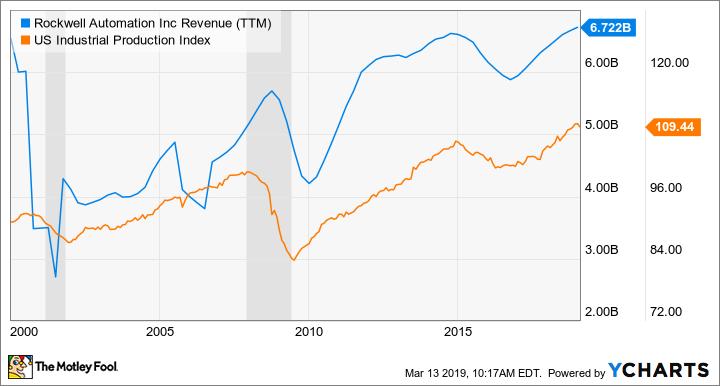 This is a concern because according to respected forecaster FedEx, the growth rate of U.S. industrial production will fall from 4% in 2018 to 2.6% in 2019 and 2% in 2020. Moreover, there are additional risks due to the ongoing trade U.S.-China conflict, and uncertainty about China's economic prospects -- the government in Beijing has already lowered its GDP growth target to the 6% to 6.5% range, compared to last year's 6.5%.

In light of that, Rockwell's management has given an unusually wide range for its fiscal 2019 organic sales growth guidance -- specifically 3.7% to 6.7%. The recently released results for its fiscal first-quarter, which ended Dec. 31, saw the company performing well enough -- and management maintained its full-year revenue and earnings guidance even as it downgraded expectations for the automotive end market, which accounts for around 10% of its sales.

Of course, some analysts now fear that guidance will prove too optimistic in the face of a general economic growth slowdown, in which case investors are setting themselves up for a fall by holding the stock. Throw in the company's exposure to the automotive and upstream oil and gas markets -- two areas of the economy expected to be weak in 2019 -- and that concern becomes even more understandable.

For reference, Rockwell's former suitor, Emerson Electric, says that  this cycle in the oil and gas industry has been featuring relatively more LNG spending, in contrast to weaker spending in its upstream oil and gas segment.

Check out the latest earnings call transcript for Rockwell Automation.

Five reasons why you can buy Rockwell Automation

The other side of the story highlights a strong case for buying the stock.

First, the midpoint of its fiscal 2019 earnings guidance calls for 11.5% growth, and the stock trades at a favorable valuation -- even if growth only comes in flat for the year.

For example, Rockwell's price-to-trailing-free-cash-flow (FCF) ratio is 19.4. If you invert this figure, it shows Rockwell is currently generating 5.1% of its market cap annually in FCF -- not bad in an environment where the 10-year Treasury yields just 2.6%.

Second, as noted above, industrial production is expected to experience decelerating growth, but it's not expected to contract as it did in the previous slowdown from 2015 through 2017.

Third, every cycle has its own characteristics, and while Rockwell's automotive-focused sales will obviously come under pressure due to the global decline in light vehicle production, Rockwell is currently seeing good sales growth -- even in China -- to customers in the life sciences and food and beverage markets. In fact, management maintained full-year guidance on the back of the performance from these industries in fiscal Q1.

Fourth, Rockwell's revenue profile is arguably less cyclical now than it used to be. For example, as CEO Blake Moret noted during a recent J.P. Morgan conference, the automotive segment now provides a smaller share of its total sales. In addition, the company has been increasing the share of revenues coming from recurring services, and expects its subscription software revenue -- currently around $400 million or 6% of 2018 sales -- to grow to 10% of sales over time. That growth will help offset revenue reductions elsewhere.

Fifth, the company's key position in the Internet of Things (IoT) sector gives it greater secular growth prospects this time around. Even during an economic slowdown, companies will still be tempted to spend on IoT-related automation if it demonstratively cuts their costs.

Putting all of this together, it's clear that Rockwell does face headwinds in 2019, so don't be surprised if its stock declines in line with any broad-based negative sentiment about the economy. That said, the stock's valuation is undemanding for investors looking for long-term exposure to automation and IoT. At the very least, Rockwell is worth monitoring with a view to buying, given the prospects for a protracted period of market weakness.