Please ensure Javascript is enabled for purposes of website accessibility
Log In Help Join The Motley Fool
Free Article Join Over 1 Million Premium Members And Get More In-Depth Stock Guidance and Research
By Chris Neiger – Updated Apr 14, 2019 at 11:54AM

The ride-hailing company's stock could initially trade for as much as $68 per share.

Lyft officially began its investor roadshow Monday, pitching itself to underwriting investment banks and disclosing in its latest SEC filing that the company wants to sell 30.77 million shares under the ticker symbol "LYFT" at between $62 and $68 per share. Lyft is hoping to raise up to $2 billion from the IPO.

That plan would give Lyft a valuation of between $21 billion to $23 billion. While this is an official share price range from Lyft, the final price could still change between now and the company's initial public offering, which is planned for the end of March. A final price range is expected on March 28. Lyft's shares will be listed on the Nasdaq exchange. 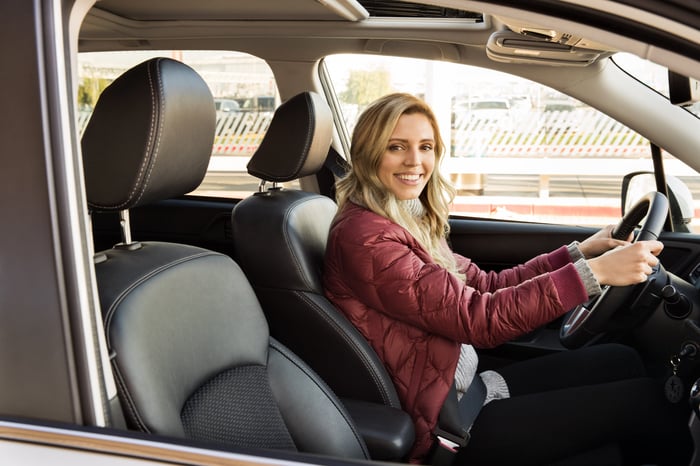 Lyft's $21 billion to $23 billion valuation projection is close to the range that Reuters had reported earlier this month, and it would represent one of the largest tech IPOs since Snap's $24 billion listing in March 2017. As a side note: Snap shares haven't been doing so well since it went public.

This latest news of Lyft's share price listing and valuation is significant to investors looking to buy shares of the company, but it's also relevant to investors keeping a close eye on Uber and its forthcoming IPO.

Lyft filed its official S-1 form -- to register the company's with the Securities and Exchange Commission (SEC) -- earlier this month. In it, the company shed a lot of light on its business.

Lyft's growth strategy (as outlined in the company's S-1 filing) will be to invest money from its IPO to grow its rider base, expand its its mulitmodal offerings (cars, bikes, scooters, etc.), and build out its autonomous vehicle pursuits. The company has about 39% of the U.S. ride-hailing market right now, and it'll need to spend more money to maintain, and hopefully grow, that position.

For example, the company's research and development costs more than doubled from 2017 to 2018, reaching $300 million last year. To stay competitive with Uber, Lyft needs to make sure it has enough cash on hand to help develop autonomous vehicle services -- and selling its shares is a great way for the company to raise capital quickly.

What does Lyft's IPO mean for Uber?

Lyft may be an enticing IPO for some investors considering that the company will be one of the only ride-hailing pure-plays to invest in at the moment. But investors are also looking to Lyft to help gauge how big Uber's IPO could be.

Uber is a much bigger company than Lyft, and its IPO planned for April is even more anticipated. Uber's revenue in 2018 was $11.3 billion, the company operates in 60 countries (compared to just the U.S. and Canada for Lyft), and it bills itself as a transportation solutions company that is exploring big bets like Uber Eats, Uber Freight, and autonomous vehicles.

Uber's valuation at IPO is currently estimated at staggering $120 billion.

What are they raising the funds for?

As investors ramp up their excitement for these IPOs, it's important to remember one of the fundamental functions of an IPO (besides raising capital): to make money for early investors.

Lyft has raised about $5 billion from private investing rounds, while Uber has raised more than $24 billion. Those initial investors need to make their money back (with interest).

While investing in Lyft could eventually prove to be a wise bet, it's probably best not to do so right when shares become available. Historically, IPOs (on average) tend to underperform the market. Waiting for some of the IPO excitement to die down a bit and watching how Lyft performs for a few quarters as a publicly traded company is a much more prudent investing strategy. Individual investors likely won't miss out on much of the share price gains (if any) by waiting, and they might actually get the chance to buy shares at a cheaper price if they hold off for a while before deciding to invest.