Now that General Electric (NYSE:GE) management has finally given guidance for 2019 and indicated the direction of earnings and cash flow for the coming year, the bull/bear debate over the stock is likely to change. Much of the uncertainty has been removed, and investors now have a clearer view of events. That said, let's took a closer look at how investors might choose to look at and value the stock -- the differences are significant.

The key question for GE investors

The debate boils down to an existentialist question over what kind of company General Electric actually is and how best to compare its valuation. Is GE a diversified industrial conglomerate, or is it an aviation company with far smaller power and renewable-energy businesses attached, and possibly a healthcare segment?

It may seem like an academic debate, but actually, it matters a lot for how you might evaluate and price the stock. GE bears tend to favor viewing it as an industrial conglomerate, while the bulls tend to favor the latter approach.

The big advantage of conglomerates is that their diversity of businesses usually ensures an ongoing stream of earnings and cash flow through any business cycle. In addition, businesses that require a massive upfront investment in solutions, such as GE's gas turbines and aircraft engines, need the ongoing cash flow from less cyclical businesses, such as GE's healthcare segment.

They are often valued on a traditional basis using the forward price to earnings or forward price to free cash flow (FCF). Immediately, we can see the problem with GE: Management recently outlined that industrial FCF would be negative in 2019, and it looks likely that it won't improve to a level commensurate with the $4.3 billion recorded in 2018 by 2020 at the earliest. 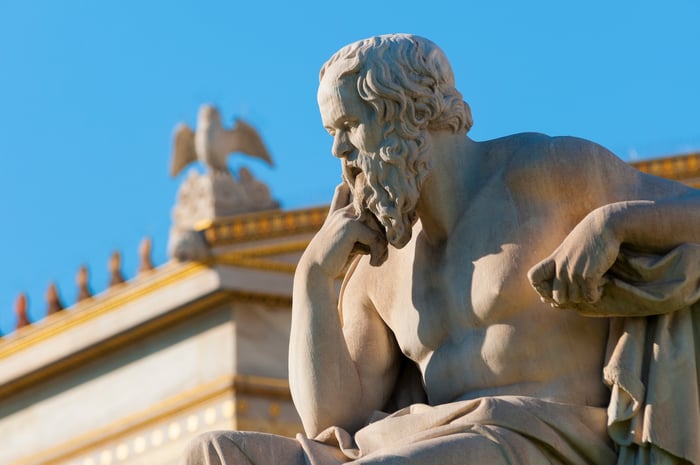 It's time to get philosophical over GE stock. Image source: Getty Images.

Putting this into context, here's the FCF outlook and valuation for GE's most direct peers, Honeywell International and United Technologies. As you can see below, if you stick to a rigid, one-year-out view, GE stock is to be avoided like the plague.

However, even with a slightly longer-term viewpoint, there's still a powerful bear case to make. For example, the average of Honeywell's and United Technologies' forward price-to-FCF multiples is 18.7 times. For GE to get that multiple given its market cap, it will need to generate $4.8 billion in FCF, but it's far from clear if GE will hit that in 2020, let alone 2021.

Putting it all together, it's clear that if you look at GE as an industrial conglomerate, you're probably not going to be bullish on the stock.

The view that GE should be judged as a kind of "aviation-plus" company is based on the idea that aviation's segment profit of $6.5 billion in 2018 dwarfs renewable energy's $287 million and power's loss of $808 million. Meanwhile, GE healthcare ($3.7 billion in profit in 2018) is already being dismembered with the $21.4 billion sale of biopharma to Danaher, and management continues to evaluate spinning off the remaining healthcare business.

Such an approach usually leads to a sum of the parts (SoTP) analysis whereby analysts evaluate each business of GE separately based on the valuations of peers. As you can see below, aerospace company TransDigm and healthcare company Siemens Healthineers both trade at a substantial premium on an enterprise value (EV, which comprises market cap plus net debt) to earnings before interest and taxes (EBIT) ratio than industrial conglomerates Honeywell and United Technologies. 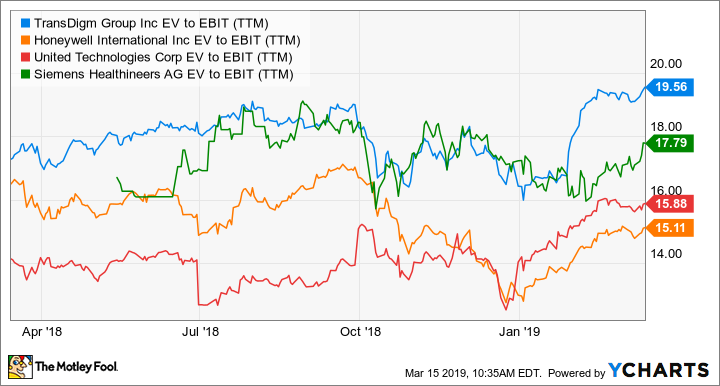 To give you a flavor of what comes out of a SoTP analysis, GE aviation could be valued at $126 billion alone based on 2018 profit and Transdigm's comparative valuation.

There's no need to delve into a SoTP analysis; for the sake of brevity, suffice it to say that the author considers a conservative EV for GE to be around $220 billion. Taking away GE's net debt leads to a market-cap valuation of $110 billion, or $12.60 a share, representing 27% upside to the current price.

If you're going to value GE on a SoTP basis, then you must explain how power and GE capital could actually be separated. Given that they are currently draining cash, which is being generated by aviation and healthcare, it makes a pure SoTP analysis a weak argument.

That said, how you view GE is, of course, up to the conscience of the individual stock-picker, but in this case, taking a hybrid approach of making a price estimate based on the low and high estimates produced by each approach seems reasonable.

On that basis, GE probably is undervalued, but not by much, and the disappointing outlook for power and FCF in 2019 -- worse than most expected and with a longer timeline for recovery at power than many would have envisaged -- means investors are going to have to be patient before realizing the value in the stock.