The world's largest retailer is making a growing bet on robots and artificial intelligence to gain a competitive edge.

Competition in the retail industry has never been more cutthroat. The dawn of e-commerce has caused a paradigm shift, with traditional retailers having to change with the times or fall by the wayside.

Walmart (WMT 0.08%) is representative not only of the old guard of retail, but also of the transition that is happening among brick-and-mortar stores to adapt to this new reality. In addition to a fierce move into e-commerce, the once-stodgy retailer has embraced cutting-edge technology to help keep costs in check and provide a better shopping experience for its customers.

Case in point: Self-propelled robots are now taking on an increasing role in Walmart's operations. 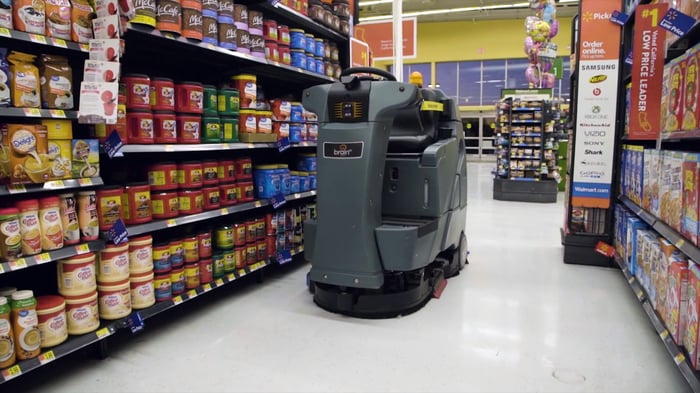 The coming of the 'bots

Walmart recently revealed it's bringing self-driving robots powered by artificial intelligence (AI) to its stores to handle the mundane task of floor cleaning. The Auto-C -- Autonomous Cleaner uses assisted autonomy as it navigates around Walmart stores, employing a variety of lasers, cameras, and sensors to scan its surroundings for people and obstacles. This technology allows the self-driving robots to function effectively and safely in complex, crowded environments, which leads to increased productivity and efficiency.

This often-overlooked chore would typically take Walmart associates (what the retailer calls its employees) about two hours per day, on average. Multiply that by more than 11,000 stores worldwide and that's a lot of time cleaning floors. Having a robot complete the task frees up Walmart employees for other, more customer-centric tasks.

The self-driving floor cleaners were initially tested in about 100 Walmart stores, and the company recently expanded that rollout to 360 stores.

Check out the latest earnings call transcripts for Walmart and Microsoft.

This isn't the first time Walmart has employed robots embedded with AI to take on monotonous and time-consuming chores.

In late 2017, Walmart began using similar technology from tech start-up Bossa Nova to scan shelves for out-of-stock items, incorrect prices, and wrong or missing labels. The device, which is only 2 feet high, has a telescoping tower that reaches more than 6 feet, allowing it to capture data from even the highest shelves. 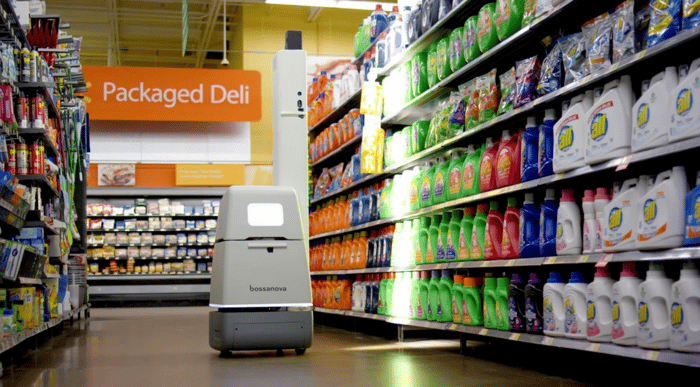 Last year, the company launched a pilot test of a system called the Alphabot, which was developed especially for Walmart by start-up Alert Innovation. The device brings items from storage to associates assembling orders for grocery delivery, so they don't have to walk through the store searching for items.

Robots aren't the only technology Walmart is using to improve customer experience. One of the company's biggest moves is the introduction of high-tech Pickup Towers. These lockers allow customers who placed orders online to retrieve their items by scanning a bar code located on their confirmation email. Walmart said early last year that it planned to expand the program to more than 700 stores by year's end.

Over the past couple of years, Walmart has been placing a greater reliance on AI to provide additional competitive advantages, and the various robots employed at its stores are just part of that strategy. In mid-2018, Walmart struck a five-year strategic partnership with Microsoft (MSFT 3.42%) to help accelerate its digital transformation. This alliance included the adoption of Microsoft as its preferred cloud provider, allowing Walmart to not only tap into Microsoft's full range of cloud solutions, but also a broad range of its machine learning, AI, and data platform technologies.

Each of Walmart's self-driving robotic devices not only helps free up Walmart associates for less tedious tasks, but also captures data that the company can analyze with AI to gain additional competitive advantages. For instance, the AI algorithms might be able to detect daily, weekly, or seasonal shopping patterns that could help adjust inventory levels for particular items.

By using these high-tech solutions, Walmart frees up associates to deal directly with customers, shorten checkout lines, and reduce pain points -- like out-of-stock items. This helps Walmart better compete in an environment that increasingly favors e-commerce.