Global office furniture and design-element manufacturer Herman Miller (MLKN -3.61%) has been able to sustain fairly impressive growth over the last several quarters despite a challenging global environment, in which trade wars, related tariffs, and an impasse over Brexit have risen up as formidable headwinds.

Below, let's isolate three key points from management's discussion of fiscal third-quarter 2019 earnings results issued on Wednesday, which illustrate how it plans to sustain its success.

One of my early areas of focus here at Herman Miller has been a push throughout the organization to become more customer-focused and easy to do business with, to the eyes of both our dealers and customers. While I see many opportunities ahead of us for improvement in this area, the organization is already taking significant steps forward in some key areas, including the development and rollout of new digital tools for our dealer network.

Owen disclosed that the company has extended a soon-to-be-released digital design and specification tool to 750 dealers in North America. In addition, the company has rolled out its newly completed Herman Miller resource library to 2,000 dealer associates. 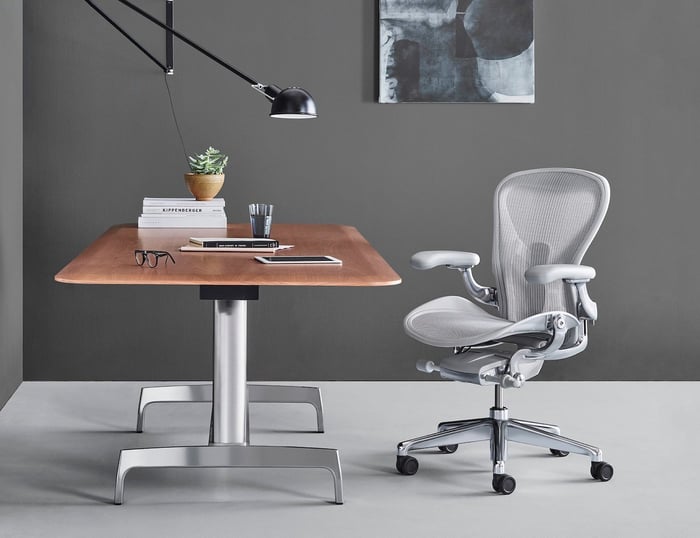 2. The consumer footprint is widening in North America

Another quarter of strong revenue and order growth is evidence of further progress in scaling our consumer business. We continue to see much higher growth than the rest of the home furnishings industry, driven both by expanded square footage and comparable brand growth across our multichannel platform.

While Owen has been at the helm of Herman Miller for only about six months, it's clear that one of her priorities is to expand the consumer business through the buildout of specialized stores, including the company's popular high-end Design Within Reach locations.

Currently, the consumer business makes up about 15% of Herman Miller's total annual revenue, yet it's one of the fastest-growing businesses in the company's portfolio, typically averaging 10% quarterly revenue growth. This revenue growth rate is second only to the Europe, Latin America, and Asia segment.

Owen noted that Design Within Reach has enjoyed 12 consecutive quarters of comparable-store sales growth. The company will open two new locations in the fourth quarter, in Ohio and California, while reopening a renovated store in Charlotte, North Carolina.

Herman Miller is also continuing the North American launch of the HAY furnishings brand it acquired last year. Owen said that the first two HAY locations -- in Costa Mesa, California, and Portland, Oregon -- are gaining traction, and that the company will continue to expand the concept in the first quarter of the upcoming fiscal year with several locations planned for the Chicago area.

Check out the latest earnings call transcript for Herman Miller.

...[W]e're all, I think, optimistic that we're [going to] get to a resolution on this, that will ultimately, hopefully, help reduce the overall drag from the tariffs on our margins that we felt all throughout Q3. But in the event that they were to go from the 10% level to the 25% level, we would have to take a hard look at them and consider [pricing actions].

In response to an analyst's question on the earnings call, Stutz explained that the company isn't yet contemplating a wide price increase to counter effects of import tariffs, aside from selective price increases that it has instituted over the last few months. This is in contrast to competitor Steelcase (SCS -3.35%), which has instituted two price increases during the last fiscal year and is presently preparing another round for this spring.

For the time being, the Trump administration has maintained import tariffs at the 10% level, and has held a move to 25% tariffs in abeyance while negotiations continue with Chinese trade representatives.

Stutz explained that Herman Miller's approach in the event of a shift to higher tariffs would first trigger actions that accompanied the onset of 10% import duties. These include reconfiguring the company's supply chain to lower costs, so-called "pain sharing" with suppliers, and a search for alternative sources of supply not exposed to import tariffs.

However, as we can see from the text quoted above, Herman Miller's management may end up passing on some of its cost increases to customers under a worst-case scenario in order to preserve its gross margins. If elevated tariffs at a 25% duty level are indeed imposed, investors may see some turbulence in Herman Miller's current robust global order flow.