Please ensure Javascript is enabled for purposes of website accessibility
Log In Help Join The Motley Fool
Free Article Join Over 1 Million Premium Members And Get More In-Depth Stock Guidance and Research
By Brian Stoffel – Updated Apr 15, 2019 at 11:03AM

This single metric from Bitauto subsidiary Yixin is the most important number to watch.

You'd have a hard time finding a company growing moderately fast that's trading more cheaply than Chinese auto-sales facilitator Bitauto Holdings (BITA). The company reported earnings on Tuesday that showed it was gaining market share in some of its most important niches. And it's backed in part by three Chinese giants: Baidu, Tencent Holdings, and JD.com.

Over the past year, non-GAAP (generally accepted accounting principles) earnings jumped 65% on a 31% increase in revenue. Yet the stock trades for a measly 13 times trailing earnings.

But that doesn't necessarily mean the stock is destined for greatness. After running the numbers over a year ago, I was convinced this Chinese small cap was trading in an extreme value range. Since then, shares have lost half of their value. 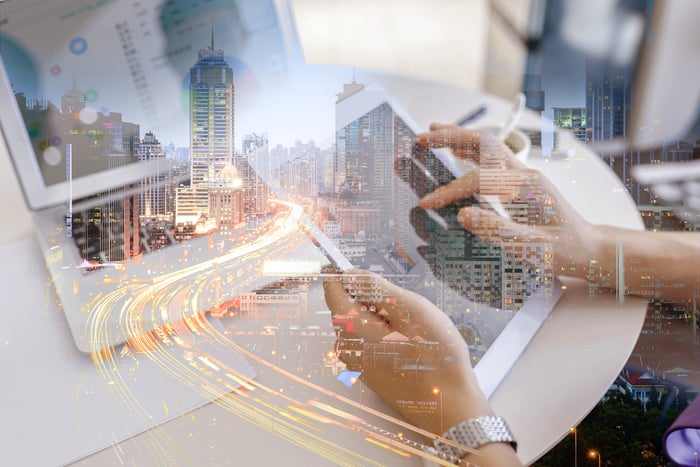 The basics of Bitauto's business

Before diving into the weeds, it's worth outlining what, exactly, Bitauto does. The company has three lines of business:

Of these three, advertising and subscriptions has historically been the stalwart part of the business, while digital marketing has always been relatively small. Transaction services, on the other hand, is the real growth engine.

Check out the latest earnings call transcript for Bitauto Holdings. 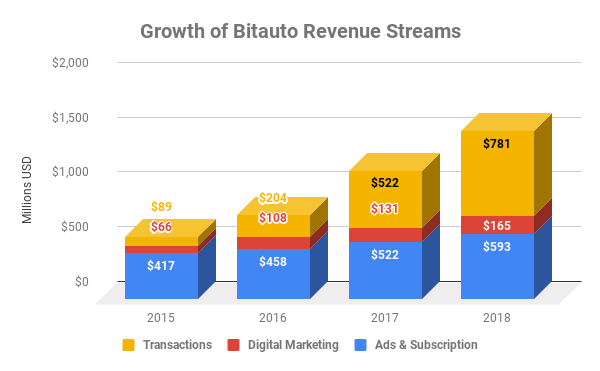 This is where things get a bit complicated. Bitauto, realizing that it needed more resources to capture the enormous market for financing autos, created a subsidiary called Yixin. Yixin is a publicly listed entity in Hong Kong -- and it was created with investments from JD, Tencent, Baidu, Bitauto, and public investors. Currently, Bitauto owns 44% of Yixin, and almost all transaction revenue recognized by Bitauto comes from Yixin.

Still with me? Good, because there's one more part to cover.

There are two ways Yixin gets customers the financing they need -- either by providing the financing itself, or by facilitating financing on its platform with third parties (Chinese lenders, insurance providers, and aftermarket specialists) offering up their services.

For most of its history, Yixin provided the financing itself. This wasn't desirable for two reasons. First, it took on the risk of loans defaulting. Second, it didn't have much of a moat around it.

By providing the platform that connects insurance agents, banks, and car buyers, however, both of these problems are solved: The loans are on the bank's books, and Yixin gets to benefit from network effects.

What's happened over the past year should have investors very happy: 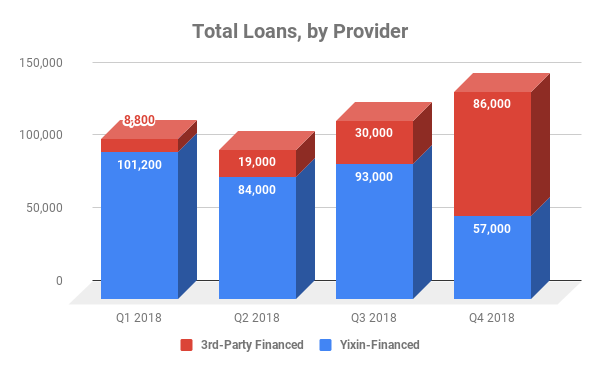 This is phenomenally fast progress. In less than a year, the percentage of loans originated using the platform grew from 8% to 60%. On an absolute basis, such loans grew almost tenfold in three quarters.

This is important and enormous progress, though that progress doesn't seem to be inspiring much confidence on Wall Street. With Bitauto's investment in Yixin valued at $830 million (taking 44% of Yixin's market capitalization on the Hong Kong exchange), today's market cap for Bitauto values the advertising, subscription, and digital marketing businesses at just over $400 million.

To put that in perspective, that $400 million is far less than sales of $757 million for the non-transaction-related businesses. And the company's net cash position (cash and investments minus long-term debt) is positive as well -- currently at about $350 million. In essence, buying shares now gets you Yixin at cost, and everything else is almost free.

In my earlier days as an investor, I would "back up the truck" and buy lots of shares of a company. Time has taught me that's not always the best choice.

Clearly, investors are bearish on Bitauto's prospects: Approximately half of all shares of the company are sold short. Another way to put it is that a lot of people on Wall Street are betting on the stock falling.

There are lots of reasons for this:

But perhaps the two biggest hurdles are these:

I think both of those concerns are very real. So while I'm happy as a shareholder to see Bitauto gaining massive market share in auto transactions, I'm not in any hurry to increase my position beyond its current 1% allocation in my portfolio.