Please ensure Javascript is enabled for purposes of website accessibility
Log In Help Join The Motley Fool
Free Article Join Over 1 Million Premium Members And Get More In-Depth Stock Guidance and Research
By John Bromels – Updated Apr 15, 2019 at 10:41AM

After keeping its collective head down for months, General Electric's (GE -1.81%) management team has started to put itself out there, offering numerous conference calls, presentations, and Q&A sessions to promote its plans for the company.

On March 5, CEO Larry Culp presented at the JPMorgan Aviation, Transportation and Industrials Conference. The company issued guidance on March 14. And on March 19, it was CFO Jamie Miller's turn to make a presentation at the Bank of America Merrill Lynch Global Industrials and EU Autos Conference.

In this, her first presentation during Culp's tenure, Miller largely repeated the same talking points Culp had used. But there was one important point that many investors might have missed that doesn't bode well for the company. 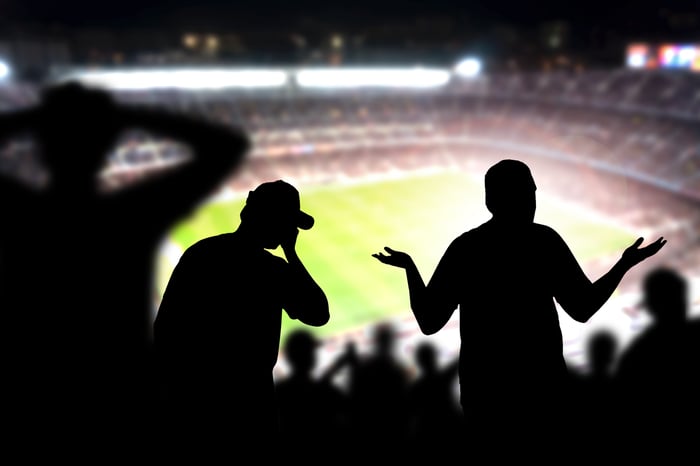 Declaring a "reset year" is a way to indicate underperformance for both sports teams and companies. Image source: Getty Images.

Culp used the term "reset" in his presentation, and many news outlets picked up on it, dubbing 2019 a "'reset' year" for the company. In her presentation, Miller used the term "reset year" multiple times. That might give investors the impression that in just nine months or so, the company's problems will be essentially memories. Here's the thing, though: "Reset years" often take more than a year.

In sports, a team will sometimes dub a year a "reset year," which is its way of telling fans not to expect too much from what's often a depleted or youth-heavy roster. The implication is that after a lousy season, the noobies will have gotten enough pro experience under their belts to start playing better.

Here in Cincinnati, our "lovable losers" baseball team, the Reds, declared that 2017 was a "reset year," featuring a much younger roster and, in particular, several new members of the pitching staff. Sure enough, the team finished at the bottom of its division. But then 2018 rolled around, and those now-seasoned players managed to...again finish at the bottom of the division, with a worse record than the prior season. Oh well, there's always next year.

But that may not be the case for GE.

There's always the year after next year

In her presentation, Miller seemed to imply on several occasions that 2020 wasn't shaping up to be all that great for the company either. Based on her comments, investors probably shouldn't expect much from GE until 2021. That's longer than many investors may want to wait.

For example, while Miller stated that Q1 2019 is expected to be the company's weakest quarter of the year -- implying subsequent improvement -- the company is still almost certain to be cash flow negative for 2019 and is only projecting "positive cash flow" (which could be $1) in 2020.

When discussing the company's deleveraging efforts, Miller pointed out that the company has "$25 billion of debt maturing in 2019 and 2020," after which (i.e., in 2021) the company will be in a much better situation. She then brought up that preferred stock from GE Capital will move to the parent company in 2021, further improving the company's financial situation.

As for the perennial thorn in GE's side, its Power division, Miller said that the first step "beyond 2019" is earnings improvement. Then she spoke about the legacy costs that the company inherited from its acquisition of Alstom's Power unit as an "inheritance tax" that will "run off over the next two years."

Put together, this all seems to indicate that a serious recovery won't begin at GE until 2021.

On the same page

This pretty much aligns with the messages that have come from the company in recent presentations. The company's guidance suggested that while free cash flow would see "significant improvement" in 2020, that's as compared to 2019's projection of negative free cash flow. The company didn't guide toward "acceleration" until 2021.

What's worrisome is that if the real turnaround doesn't show up until 2021, it may be too late to rescue GE's credit rating. The three major credit ratings agencies -- Standard & Poor's, Fitch Ratings, and Moody's -- have already taken away GE's "A" rating, with the company's debt now rated BBB+/Baa1. Fitch has been making noise that it may have to downgrade GE's debt again if it doesn't look like GE Power will break even and improve its margins by 2020 -- which at this point isn't looking too likely.

Of course, nobody knows how the market might react to such a downgrade...or how it might react to any other developments (good or bad) that arise in the next two years. But with a dividend yield of (currently) 0.4%, is it worth the wait?

As in any turnaround story, there's a lot of risk involved here. I'm not convinced the risks -- a potential credit downgrade, substantial improvement in the power market, any number of other unknowns -- are worth it. You have to consider that even if all goes according to plan, it will take nearly two years to see meaningful improvement, for which you'll be earning a paltry dividend yield.

Being a GE investor is a lot like being a Reds fan (I'm both): It takes a lot of patience and doesn't guarantee any reward. For those who can stomach those conditions, it may (eventually) be worth it. But right now, I think there are better places for your money in the industrial space.