It can take years for a stock to double -- if it does at all. These three did it in less than three months.

By now, most investors have largely recuperated from the pain of 2018's year-end stock market slump. After the S&P 500 climbed for much of last year, notching nearly 10% gains and hitting an all-time high in September, fears about the trade war with China and the specter of rising interest rates sent share prices into a tailspin. The index ended 2018 down 6.2% -- its worst performance in more than a decade.

Of course, 2019 started out with a bang, and the S&P 500 up 12% year-to-date -- but a few stocks have skyrocketed beyond those paltry average gains. Here's why the share prices of liquid biopsy leader Guardant Health (GH 16.40%), streaming giant Roku (ROKU 11.82%), and Brazilian fintech company StoneCo (STNE 20.11%) have more than doubled so far this year. 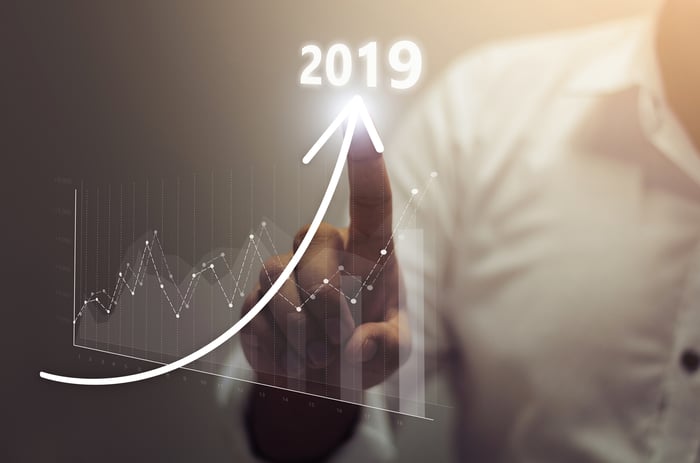 One key to beating cancer is early detection. Guardant Health wants to help doctors and patients fight those deadly diseases with data. Cancerous tumors shed some of their DNA and RNA, which gets picked up and carried through the bloodstream. Guardant has developed a simple blood test that can be used as part of a routine physical to detect those nucleic acid signals in the blood, allowing for much earlier detection and treatment.

Guardant is currently concentrating on late-stage non-small-cell lung cancer (NSCLC), but has plans to expand to tests for other cancer types, targeting a $35 billion market. Its Guardant360 comprehensive liquid biopsy can provide results in as little as seven days, and has already been used to test more than 80,000 patients.

The company only went public six months ago, but its business is booming. It generated revenue of $91 million in 2018, up 82% year over year. Test volume for biopharmaceutical customers increased 65%, and the average price per test increased as the result of Medicare reimbursement which began in the fourth quarter. The company isn't without risks, though: It lost $85 million last year, a small improvement from its $89 million loss in 2017.

Check out the latest earnings call transcripts for Guardant Health, Roku, and other companies we cover.

Even in the face of growing competition in the video-streaming space, Roku has successfully carved out a niche for itself as an aggregator of content. It expanded beyond its namesake streaming devices to focus on its platform, and that strategy is reaping big rewards. Total net revenue in 2018 rose 45% to top $742 million, but its operational metrics are even more impressive.

Roku's active accounts grew 40% to 27 million at the close of 2018, while streaming hours surged 69% to 7.3 billion -- illustrating that customers are spending more time on its platform. And the average revenue from each customer increased by 30% year over year to $17.95.

Brazilian fintech company StoneCo isn't a household name in the U.S., but it is tapping into two of the biggest global megatrends -- e-commerce and payment technology. In many parts of Latin America, the majority of consumers don't have a credit card, nor even a checking account. In a region where online shopping is just beginning to gain steam, StoneCo is empowering vendors to make the move into e-commerce. By focusing on small- and medium-sized businesses, its attracting a growing cadre of merchants -- and customers.

Its recent results show just how lucrative the opportunity is. In the fourth quarter, revenue increased 114% year over year to $140 million, while adjusted net income grew 646% to $41 million. Total payment volume -- the total payments made by customers on its platforms -- soared to more than $7 billion, up 74% year over year. The number of active clients more than doubled to 268,000.

It's worth noting that Warren Buffett's Berkshire Hathaway was an early investor in StoneCo, picking up an 11% stake when the company went public in October 2018 -- a huge vote of confidence in this young company.

Why Roku Stock Is Rising Today