New shoe releases and digital sales fueled a strong quarter, and the powerhouse sneaker brand has a lot more left in the tank.

Nike (NKE) had a high hurdle to overcome entering its fiscal third-quarter earnings report. With the stock price sitting at a new all-time high, it was going to take a lot more than merely an earnings beat to keep the stock moving higher. Despite the stock falling about 7% after the release, the quarter was another good one for the athletic wear giant, as Nike continued to demonstrate the strength of its brand in a highly competitive market for footwear. 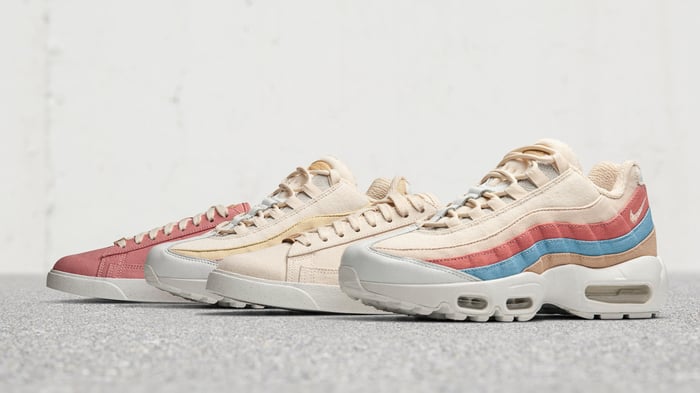 The Air Max 95 has been a top seller for Nike. IMAGE SOURCE: NIKE.

Following up with the solid double-digit growth of last quarter, Nike delivered another solid performance on the top line with currency-neutral sales up 11% year over year. More impressive was Nike's gross margin, which ticked up to 45.1% compared to 43.8% in the year-ago quarter. For that, management credited higher average selling prices and strong growth from digital channels.

Nike has made considerable efforts in recent years to beef up its digital capabilities, and the company has done that by not only improving order processing and the Nike.com shopping experience overall but also releasing sophisticated apps, especially the popular SNKRS app. In the last quarter, SNKRS traffic and revenue surged by triple-digit rates, as 17 of the top 20 sneaker launches through the app sold out after launch.

The fiscal third quarter was Nike's first-ever $1 billion quarter for digital sales -- an important milestone, as retail battles are increasingly being fought online. As a whole, Nike's digital business was up 36% (excluding currency changes) during the fiscal third quarter, inviting CEO Mark Parker to refer to it as a "powerhouse" segment for the company.

The investments Nike made to improve its supply chain and design creation process over the last few years have started to pay off in the previous few quarters. Footwear sales were up 13% (excluding currency) year over year, led by strong sales of Air Max styles, including the Max 95 and 97, as well as Tuned Air. This is a significant improvement over the low-single-digit growth the company was experiencing in footwear more than a year ago. Additionally, CEO Mark Parker said the Air Force 1 "is accelerating growth in both men's and women's." He also called out the classic Air Jordan 1 as a top seller across the world.

Also, Nike continues to innovate with new products, such as the new Adapt smart-lacing basketball shoe, but its Nike's ability to quickly respond to consumer demand shifts by updating core styles with new colorways and materials that seems to be driving the double-digit growth in footwear right now.

Consumers are increasingly wearing running and basketball shoes as lifestyle sneakers, so having an efficient process in place to respond to the latest trends in the sneaker (fashion) world is crucial to Nike's business in terms of driving higher full-price sell-throughs and keeping margins firm. The last few quarters show Nike on the ball here.

Management is focused in the short term on fast-tracking new shoe collections below the $100 price point, which could boost demand from budget-conscious shoppers, as several of Nike's popular sneaker styles are typically priced around $150 and up.

As we move through 2019, expect to see Nike start to apply its speed-to-market initiative in apparel, where management sees tremendous growth opportunity. Apparel sales are up 12% (adjusted for currency) through the first nine months of fiscal 2019 but only make up about one-third of total sales.

Specifically, management is targeting the women's side of apparel. They plan to significantly expand the sports bra business this year, as the bra category is a hotly contested area in women's athletic wear. lululemon athletica has had success bolstering its core women's business lately with improved designs in sports bras. Nike plans to launch more than 40 new styles of bras in the coming months.

Revenue growth should stay consistent through fiscal 2020, but an improving gross margin should contribute to double-digit earnings growth. Analysts currently expect Nike to report earnings per share of $3.16 in fiscal 2020, representing growth of 18% over fiscal 2019.