This isn't just a tease. BMW has been talking about its electric-vehicle plans for years, but now it's putting California upstart Tesla (NASDAQ:TSLA) -- and its own global rivals -- on notice: BMW's upcoming electric vehicles are real products, not "vaporware"; the new electric BMWs are being developed to meet the company's traditionally high standards; and they're coming to market over the next two years.

Here's a look at what we know about the three upcoming electric BMWs, and how they fit into the automaker's overall future-tech strategy.

BMW's X3, a compact luxury crossover SUV, is one of its best-selling products around the world. This all-electric version, called the iX3, will go into production next year. BMW said it will have a rated range of over 400 kilometers (248 miles) on the new, stricter WLTP European test cycle, and the ability to use DC fast-charging stations with capacity of up to 150 kilowatts. 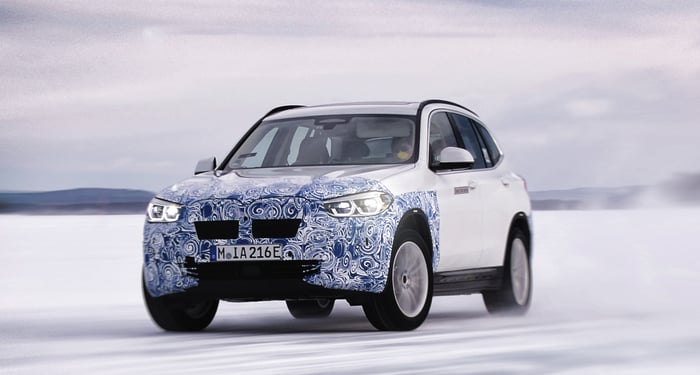 BMW will offer the iX3 in markets around the world. But in an interesting twist, all iX3s will be built in China, at a Shenyang factory owned by BMW's joint venture with Chinese automaker Brilliance Auto (NASDAQOTH: BCAUF). That plan should help lower BMW's costs, making the iX3 more affordable, more profitable, or both.

The photos released by BMW suggest that the i4 is a fairly traditional-looking BMW sedan -- and that means it's aimed squarely at Tesla's Model 3. Like the iX3, the i4 will use what BMW calls its "fifth-generation" electric-drive technology -- but with enhanced performance.

The electric BMW i4 will be built in Germany starting in 2021. Image source: BMW AG.

BMW has been throwing around the "iNEXT" model name for the last few years, while promising production -- of something -- in 2021. Originally conceived as a futuristic self-driving sedan, the iNEXT has evolved into a big electric luxury SUV that will incorporate BMW's latest not-quite-self-driving system when it goes into production in 2021. 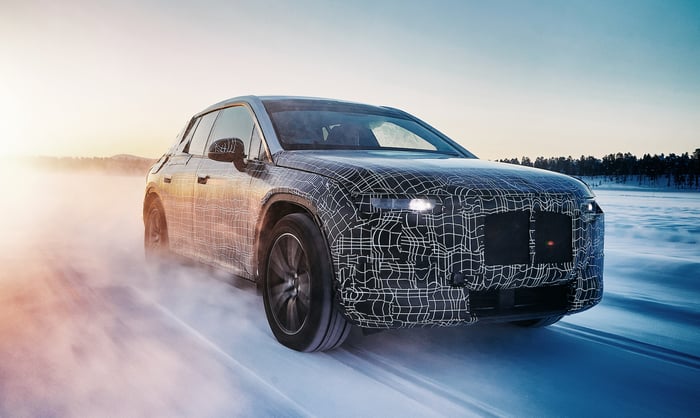 The BMW iNEXT will be a luxurious high-tech showcase when it arrives in 2021. Image source: BMW AG.

BMW describes the iNEXT as its "technology flagship." It said the vehicle will "combine the latest innovations in ... design, automated driving, connectivity, electrification and services." That said, it'll use the same fifth-generation electric-drive technology as the i4 and iX3, with WLTP-rated range of over 600 kilometers.

And the self-driving? BMW is now saying that the iNEXT is "designed for Level 3 automated driving." Level 3 isn't full self-driving; it's a somewhat more robust version of the best driver-assist systems (like Tesla's Autopilot and General Motors' Super Cruise) available right now.

BMW will begin producing the iNEXT SUV at its factory in Dingolfing, Germany, in 2021.

For BMW, this is still the beginning

As with most of the big global automakers, the electric vehicles that BMW will launch over the next two years are just the beginning. BMW has said that it will have a total of 12 battery-electric models by 2025, ranging from a lower-priced successor to the small i3 (reportedly under 30,000 euros, or about $33,700) to big luxury models like the iNEXT.

Why is it taking so long? It's not that BMW is stymied by electric-vehicle technology. It's that the supply chain needed to support the millions of electric vehicles that BMW and its global rivals plan to produce every year is still being created. As suppliers of lithium and batteries and motor parts ramp up, costs will come down -- and more electric vehicles will come to market.

In the near term, BMW is spending heavily to help make all of that happen. The company acknowledged last week that its spending on electric vehicles and other advanced technologies will squeeze its margins in the near term -- but the expectation is that it will all pay off as these vehicles come to market over the next few years.