College costs are rising, and so are these stocks.

Picking the right stocks for a portfolio that will ultimately be used for college can be a challenging task. Investors want to pick stocks that don't have too much risk but do have high potential to pay off big over the coming years.

We asked three of our Motley Fool contributors for their top stocks for a portfolio built for college, and Canopy Growth (CGC -16.43%), NextEra Energy (NEE 0.04%), and Axon Enterprise (AXON -7.92%) were at the top of their lists. Here's why. 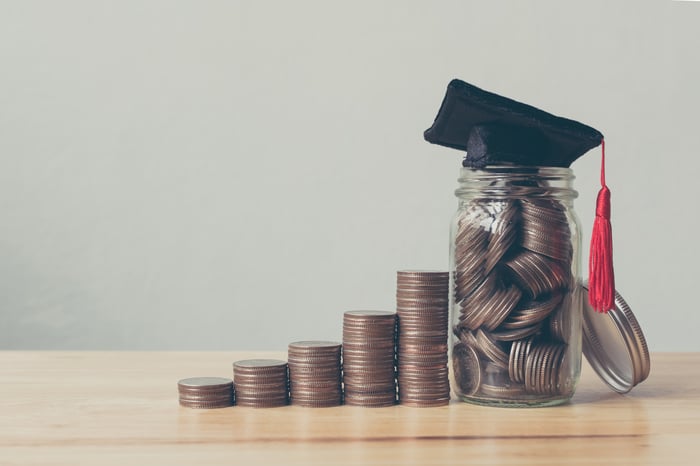 Matt DiLallo (NextEra Energy): As the cost of college continues to escalate, parents face a daunting challenge as they try to save up for their kids' future. One way they can supercharge their college savings is by investing it in stocks that can generate above-average total returns. While several companies could do just that, renewable-energy-focused utility NextEra Energy has a history of delivering market-beating total returns and has a plan to continue doing so in the coming years.

Since 2005, NextEra Energy has expanded its per-share profitability at an 8.5% annual clip, which is the highest among the 10 largest power companies in the country by a wide margin. That consistent above-average earnings growth, when combined with the company's growing dividend, has enabled NextEra Energy to deliver average annual total returns that have outperformed 86% of the stocks in the S&P 500 over that time frame.

The company is working hard to continue generating market-beating returns in the future. It's doing so by investing an astounding $40 billion to expand its utility and renewable energy businesses, which should enable the company to grow earnings at a 6% to 8% annual clip through at least 2021. Meanwhile, NextEra has increasing confidence that it can continue expanding profits at around that same rate in future years. That steady earnings growth, which could power continued increases in the company's dividend, should enable NextEra to maintain its market-beating ways, which would provide a nice boost to your kids' college savings plans.

Travis Hoium (Axon Enterprise): There's no question law enforcement agencies around the world are adopting body cameras and less-lethal weapons, like tasers, at a rapid rate, and the company riding that wave is Axon Enterprise. The company is the clear industry leader, especially after buying its most ardent competitor, VIEVU, last year.

Body cameras and tasers are Axon's core right now, but they're just the start of the company's long-term strategy. A records management system will be launched later this year and will allow customers to capture video and create transcripts for police reports automatically. Dispatch software is expected next year, which will expand the ecosystem to dispatchers as well.

Over the last decade, Axon Enterprise has grown revenue more than fourfold, and while net income may not have followed, that's because the company has been investing in growth. 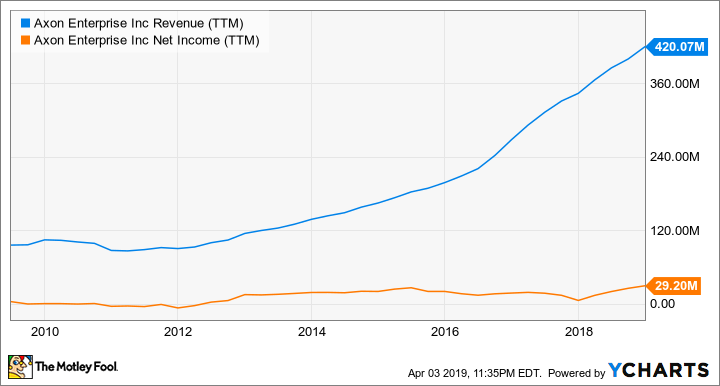 If you're investing for college and you have a long time horizon, Axon Enterprise is a great stock. It's in a booming market with a large lead in market share and lots of ways to increase profitability as the business matures.

Todd Campbell (Canopy Growth): Most of the time, companies must break new ground to have a shot at skyrocketing revenue growth. That's not true of cannabis companies. The marijuana market already exists to the tune of $150 billion annually, according to the United Nations, and market leaders' soaring sales are simply a function of shifting those sales from the black market to regulated, legal marketplaces.

The company's not content serving only Canada, either. In January, it announced its plans to establish a hemp processing and research park in New York state. The move will open the door to a market for hemp-derived chemical cannabinoids worth an estimated $600 million per year. Importantly, it sets the stage for a pivot to targeting the $50 billion U.S. marijuana market if marijuana legalization happens on the federal level someday.

The potential to profit from pot is reminiscent of the post-Prohibition success enjoyed by beer, wine, and spirits makers. As a result, alcohol giant Constellation Brands invested $4 billion for a 38% equity stake in Canopy Growth last year. The cash infusion gives Canopy the deepest pockets in the industry, positioning it perfectly to take advantage of the marijuana legalization boom.

Admittedly, there's plenty of risk associated with this stock, but the potential reward could make Canopy Growth one of the best long-haul investments to add to risk-tolerant portfolios.

Three ways to grow your portfolio

As different as these three companies are, they all have a lot of potential to grow your portfolio long term. That's what investors looking forward to college costs should be looking for and it's why they're a great place to start your portfolio or add some diversity to what you already own.