A recent update to AirPods and completely revamped Powerbeats highlight Apple's vigorous efforts to ramp up its wearables business. 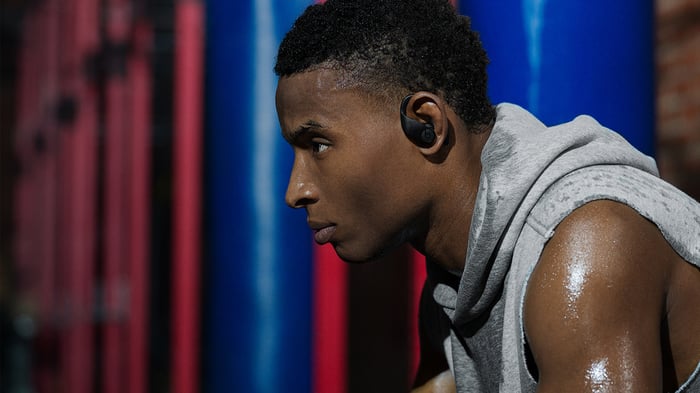 Apple and Beats didn't hold anything back with the latest iteration of Powerbeats.

The specs are impressive. First of all, the headphones are totally wireless, like Apple's AirPods. Though previous Powerbeats versions were wireless in terms of not needing to physically connect to a device in order to play music, they still had a wire that connected the earbuds to each other. In addition, Powerbeats Pro headphones are 23% smaller and 17% lighter than their predecessor, sport the same H1 chip in the second-generation AirPods, and provide up to nine hours of listening time on a single charge (compared to five hours for Apple's new AirPods).

Finally, Beats completely reengineered its latest Powerbeats' fit. "To achieve the best possible fit on the widest array of ears, over 20 configurations were electronically modeled and physically tested," Beats said. "The result is a completely new, ergonomically angled acoustic housing that nests comfortably in the concha bowl of the ear with an off-axis nozzle."

Starting at $249.95, Apple has priced Powerbeats Pro as a premium product. Indeed, they're more expensive than the second-generation AirPods ($199 with a wireless case and $159 without). But given the Powerbeats Pro's compelling value proposition, the price seems fair.

The headphones are set to launch next month.

One of Apple's most important growth drivers

It's no surprise Apple is investing in the product development of its wireless headphones. Not only have AirPods been a major hit by themselves, but Apple's wearables business, which management defines as its Apple Watch, AirPods, and Beats products, is seeing rapid growth. In the company's most recently reported quarter, wearables revenue jumped 50% year over year. Furthermore, the "wearables, home, and accessories" product segment (formerly called "other products") that Apple Watch, AirPods, and Beats products fall into is Apple's fastest-growing segment. Trailing-12-month revenue from Apple's wearables, home, and accessories segment rose 34% year over year, trouncing the company's consolidated revenue growth rate of 9% over this same time frame.

While investors' focus when it comes to Apple's wireless headphones is often on the company's namesake AirPods and not Beats products, the Powerbeats Pro's potential shouldn't be underestimated. After all, Powerbeats are the top-selling fitness headphones in the world -- and now they're better than ever.

Apple has typically credited Apple Watch and AirPods to the strength of its wearables business. But with the tech giant doubling down on its Beats products with Powerbeats Pro, management may be betting Beats can kick into high gear, too.