Shares of auto parts supplier Lear (LEA -1.02%) fell 10.8% in March, according to data provided by S&P Global Market Intelligence, after an analyst downgraded the stock and voiced concerns about the growth of the company's electronics segment.

Wall Street can't make up its mind on Lear. The company, a manufacturer of automotive seating and electronic systems, saw its shares decline by more than 30% in 2018 over concerns that the U.S. automotive market has peaked and worries that electronics suppliers will be forced to dramatically increase spending to develop technologies for hybrid and electric vehicles. 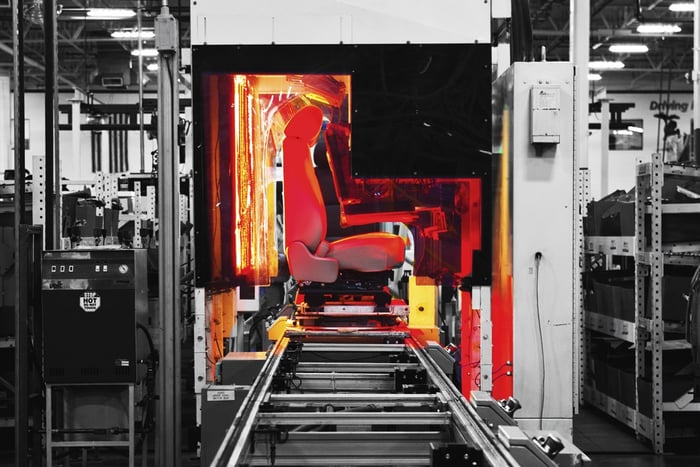 The shares rebounded from that lousy 2018 performance with a 25.3% gain in January, but hit the brakes in mid-March after Deutsche Bank analyst Emmanuel Rosner downgraded the company to hold from buy and cut his price target for the shares. Rosner said he has concerns about the growth and margin trajectory of Lear's tech unit, noting that the E-systems business has seen margin compression and faces a shrinking backlog.

Lear shares have gained back what they lost in March in the first few trading days in April, and the stock is once again up 21% for the year. On April 2, the company announced it would buy automotive software supplier Xevo for $320 million to supplement its tech portfolio.

This is a dangerous time to be invested in automakers and their suppliers due to fears that a slowing global economy will eat into sales. But Lear CEO Raymond E. Scott on a January call with investors insisted Lear is well-positioned to weather any global slowdown.

"We have never been in a better competitive position or had more financial flexibility than we have today," Scott said. "And I'll tell you, I couldn't be more excited about the future of Lear Corporation."