Textron (NYSE:TXT) has survived the initial cut in the competition to supply the U.S. Army's new scout drone, a positive step for a unit that was at risk of losing out as well-funded defense titans invade the drone sector.

Textron's AAI subsidiary and the privately held Martin UAV, working with a unit of Northrop Grumman (NYSE:NOC), were awarded $99.5 million apiece to provide scout drones for testing. The drones will be evaluated as potential replacements for the Shadow drone, one of Textron's signature projects.

The Army solicited proposals last fall for its Future Tactical UAS (FTUAS) system, and there was speculation leading up to this decision that Textron could end up kicked out of the drone market if the Army decided to look elsewhere for the replacement. 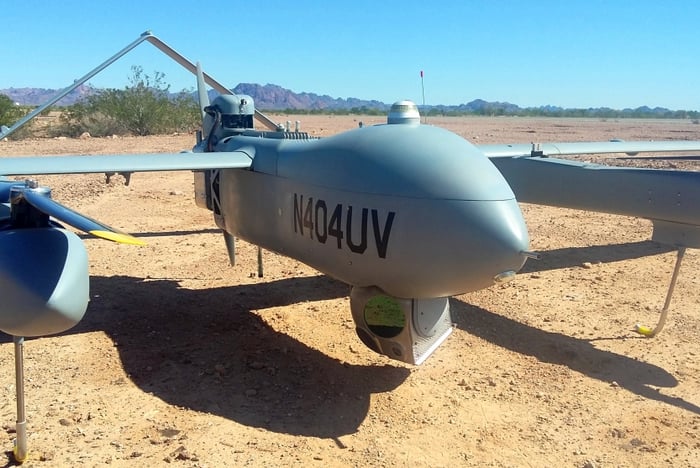 Textron's drones are ready for a fight. Image source: Textron.

The Pentagon, in announcing the awards to AAI and Martin, said it received 11 bids but did not name any of the unsuccessful entrants.

Textron's Shadow was revolutionary when it was first introduced in 2001, but lately it was beginning to show its age. The Army was reportedly dissatisfied with the Shadow's noise, size -- it required a large C-130 cargo plane for transport -- and its inability to land without a runway.

The FTUAS drone program is one part of a major effort to overhaul the Army's aviation portfolio, with the service also interested in eventually modernizing its helicopter wing, procuring a new larger drone, and smaller air-launched mini-drones.

Although the government did not list any of the other bidders for the FTUAS drone program, it is likely that Textron and Martin beat back a strong list of military contractors to advance. When the U.S. Marine Corps selected its Shadow replacement last year, Boeing's RQ-21A Blackjack beat out Textron AAI's Aerosonde as well as entries from Raytheon and General Dynamics, working with Israel's Elbit Systems.

Boeing, thanks to its U.S. Marine win, was considered a favorite to win the Army competition as well.

Whoever ultimately prevails should expect a big payday. If the Army does a one-for-one replacement of the more than 500 Shadow drones that have been acquired, the final contract could be valued at about $2 billion.

A positive step for Textron

Textron is a somewhat quirky conglomerate, a collection of units making everything from snowmobiles to golf carts to business jets. Some of those businesses have been inconsistent performers of late, but Textron has high hopes for its growing military business.

The company has a range of products catered to the Pentagon, including robotic ground vehicles, low-cost propeller-based fighter planes, and a futuristic helicopter design. But drones have been a solid revenue generator since the early days of the Shadow, and it's important for Textron to keep the business strong.

Military sales are a key part of the bull case for Textron. Beating out larger defense titans to stay alive in this Army drone competition is a major step in the right direction.