Sometimes the best future returns come from companies that have already shown themselves to be successful.

Investing is all about looking forward to future growth and returns. When a company's shares are up substantially, those considering buying may think they've already missed the boat, and thus that they should either wait or look elsewhere. While that can be the case, it's also true that successful companies can often find a way to compound their growth over time, making the recent highs mere stepping stones to future returns.

We asked three of our contributors to pick companies whose shares have doubled but that look as if they still have room to grow. They picked Iridium Communications (IRDM 0.38%), Carvana (CVNA 0.42%), and Ionis Pharmacuticals (IONS -0.57%). Read on to learn about these companies' potential. 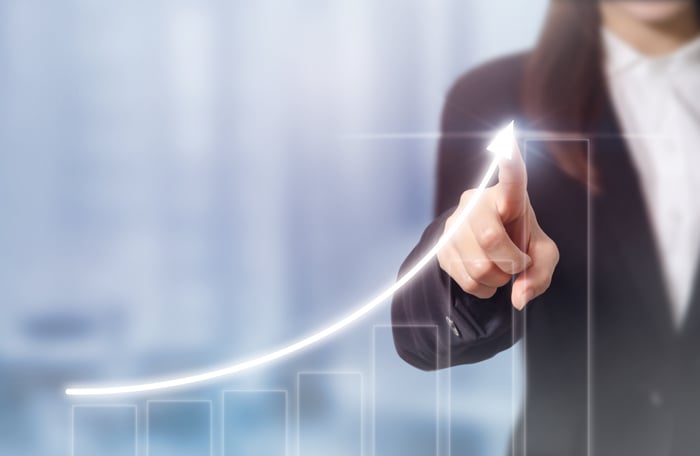 Nicholas Rossolillo (Iridium Communications): In the last trailing 12 months, shares of satellite communications company Iridium Communications are up 140%. Total revenues increased only 17%, and operational earnings before interest, tax, depreciation, and amortization were up 14% in 2018. Why the huge disparity between the stock and business results? Most of that has to do with Iridium completing its next-gen satellite constellation, NEXT, enabling broadband-speed internet anywhere on the globe.

While the company continues to work to enhance its service -- such as by building new ground stations to round out the satellite array -- the completion of NEXT means Iridium is entering a new phase in which infrastructure spending will fall and adding new connections to its network will become the focus. However, new customers started signing up even before new services got up and running. Total billable subscribers grew 17% in 2018 and surpassed 1.1 million at year end.

That bodes well for Iridium's future prospects, especially now that broadband and data services are beginning to go live. The company has other irons in the fire, too, like its subsidiary Aireon -- a space-based air traffic surveillance system that makes use of NEXT satellites. Granted, it will take a few years for these various services to get up and running at full speed, which will mean some turbulence for the business and shareholders at times.

Nevertheless, it's early on in the satellite service provider's latest chapter, and management expects revenue growth in this new era of its history to get off to a good start -- up an anticipated 8% in 2019. Over the next few years, demand for broadband-speed data connections and globe-spanning service is expected to increase steadily, with profitability increasing even faster. Thus, even though the stock rocketed higher, the forecast potential could mean Iridium has a lot left in the tank.

Daniel Miller (Carvana): It's been volatile 12 months for Carvana, a rapidly growing used-car-buying e-commerce platform known for its car vending machines, and yet it's still recorded a 168% surge in stock price. 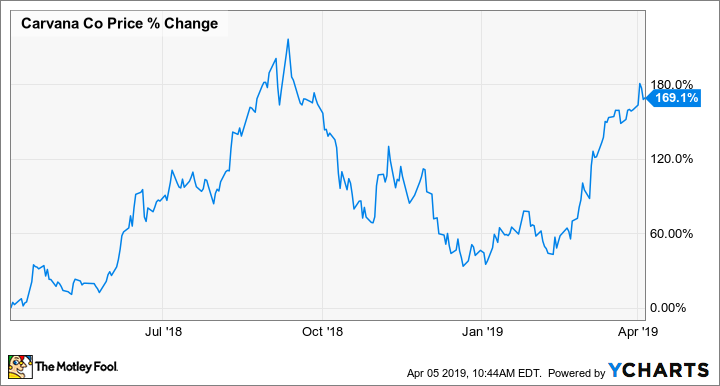 And while new-vehicle sales in the U.S. are slowing, sales of used vehicles are expected to hit a record 41 million in 2019, according to Edmunds. Part of the driving force is the rising average transaction prices of new vehicles, which are increasingly loaded with expensive new technology and features. As those prices increase, the value offered by used vehicles -- especially with a wave of off-lease vehicles coming to the used market -- continues to entice more consumers.

More consumers joining the used-car market is great news for Carvana, and its numbers have been soaring recently. Carvana was the fastest growing automotive retailer in 2018 by units, and its 113% increase in retail units sold to 94,108 was a company record. Monthly unique visitors to its website during fiscal 2018 jumped 121% to 2.3 million, and it launched a record 41 new markets and opened a record eight vending machines.

While the stock has already doubled, the company has a long road ahead for investors. Already since March 19, 2019, the company has opened three additional markets in Texas and six more in California, while also opening a new Indianapolis Inspection Center to add capacity for inspections, refurbishing vehicles, and improving delivery in the Midwest. As Carvana continues to launch more markets, improve its operations and gross profit per unit, and spread its brand awareness via its unique car vending machines, its stock has doubled and still has room to grow.

Chuck Saletta (Ionis Pharmaceuticals): Ionis Pharmaceuticals has seen its shares double within the past year, driven by sufficient success to justify strong milestone and royalty payments from its partners. That's critically important for the future of the company, as it relies heavily on its pipeline continuing to turn out successful compounds to drive its growth.

A key challenge in the field of biotechnology is that research, development, and testing can take years and billions of dollars, and only successful drugs generate sufficient revenue to cover those costs. Failures can happen at any stage of the process, and the farther along in the journey the failure happens, the more money has been sunk into development and testing and simply won't be recovered.

The somewhat novel way Ionis Pharmaceuticals handles that problem is by having strong partners for most of the products in its pipeline. Those partners provide funding to help keep research and testing alive, allowing Ionis Pharmaceuticals to have a much deeper pipeline than it could have if it were solely responsible for those costs. That way, while a failure still stings, it isn't necessarily the fatal blow it could otherwise be.

For a research-oriented company like Ionis Pharmaceuticals, success brings with it sufficient payments to plow into further broadening its research portfolio. That gives it the opportunity to discover, develop, and test even more compounds -- offering it the chance for further growth. Its shares may have doubled over the past year, but that's because its past successes are now handing it enough additional cash to continue to work its pipeline. That gives it the opportunity to potentially grow even more.