There are plenty of stocks that have turned a meager sum into six figures or more over the last 30 years. It can seem a daunting task to figure out what the next wealth-building stock is going to be, but I have found that the signs of tomorrow's great companies are always in plain sight. 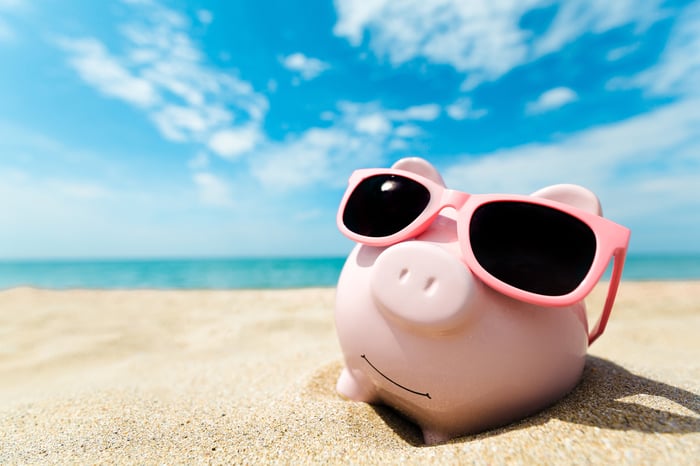 Wayfair stock has climbed 294% since its IPO in 2014. The online home-goods store has consistently increased revenue by 40% or more. That sky-high growth is indicative of the massive opportunity in front of the company, where the total home-goods market is estimated at $600 billion.

The company is spending heavily on logistics, technology, and marketing, which has paid off with the company taking a significant share of the spending starting to shift online in home goods. While home-goods sales across the industry are growing at a snail's pace at physical stores, online sales are rising around 15% per year. Wayfair's top-line growth rate of 40% or more in recent quarters suggests the company is taking a significant share of that market.

How is Wayfair doing that?

Management believes it possesses a competitive advantage because of its infrastructure, which is specifically designed to handle shipments of large, bulky furniture that big-box retailers are not equipped to deal with efficiently. Throw on top of that a slick online shopping experience, in which Wayfair prides itself on its exceptional customer service and helping buyers find the right look for their home, and you have a company that is tearing up the home-goods market.

As long as Wayfair continues to excel in this way, it should continue to grow for many years. Sometimes companies that fill a niche within a large industry, like Home Depot, can deliver huge returns for shareholders. I believe Wayfair could be one of those stocks.

The growth in the mobile payment market promises big gains for investors, given that the global market for mobile payments is expected to grow 33.8% annually, according to Allied Market Research. Square is a leader in providing point-of-sale solutions at checkout for merchants, and its Cash App is the most downloaded peer-to-peer payment app in the app store. The stock has risen a staggering 479% since its IPO in 2015.

Revenue has increased nearly four-fold since 2014 to $3.3 billion last year. Square started out offering digital registers and card readers for small merchants, but the company has expanded to provide a full suite of software services, including Square Capital, a restaurant ordering platform called Caviar, the Cash App, and most recently, the new Square Card for merchants. The Cash App has been a notable green shoot for the company, with more than 15 million monthly active users at the end of 2018.

Square is doing just fine with its point-of-sale solutions and services, but the success of the Cash App has management thinking big. More people are using the app like a bank, which prompted the release of a similar offering for business owners with the new Square Card.

With both offerings, Square is starting to go after big banks by offering a sophisticated and convenient way for the underbanked to manage money. Even at Square's high valuation, I think this stock has multibagger potential written all over it.

The growth story of Five Below has turned many heads on Wall Street. The company operates a growing footprint of 750 stores in 33 states that sell a range of fun items to teenagers for less than $5 per item. Categories span candy, sports, technology, party, crafts, and many others. The stock is up 196% over the last three years, and about half of the country still hasn't been exposed to the brand yet.

The whole concept of Five Below is clever. The company keeps the risk of shifting consumer preferences low by actively monitoring what teenagers are into using various channels, including social media. Management is not speculating on future trends but instead reacts to what teenagers are already interested in, which ensures the store's assortment is always on-trend.

Stocking the store with always-on-trend merchandise, in turn, keeps teenagers coming back, sales growing, and shareholders making money. Profits have risen from a meager $12 million to $150 million over the last decade. Management believes the company can open as many 2,500 stores across the country, about four times the current footprint. Moreover, if it's successful in spreading its brand awareness, I wouldn't be surprised to see Five Below expand into other categories over time.

With a profitable business model and many states the company has to penetrate, Five Below could be one of the next great retail brands in the making.