You'd think a big sales hit would crush GM? Here's why you might be wrong.

In the fast-paced world we live in, it's easy to be consumed and influenced by short, quick, and dramatic headlines. One such headline could be General Motors' (GM 0.47%) overall 7% drop in vehicle sales volumes during the first quarter compared to year-earlier levels, including a 21% plunge in passenger car sales. Investors could be forgiven if they felt more pessimistic about the automaker's results heading into the first-quarter earnings call April 30.

But there is so much more to the overall sales data, including healthier sales of crossovers/SUVs and trucks, and so much more to the story. Let's dig deeper into the sales figures and put into context how much GM's dramatic sales declines actually matter for its first-quarter results. Hint: not likely as much as you'd think.

Looking at GM's numbers from a 10,000-foot view, the first-quarter doesn't look pretty. General Motors delivered 665,840 units during the first quarter, a 7% decline compared with the prior year, albeit with one less selling day in the recent quarter. Much of that downward pressure came from the huge hit in passenger car sales. But if you look more broadly across GM's entire lineup of vehicles, you'll find that somewhat healthier conditions in its SUV, crossover, and truck business are resulting in pushing average transaction prices higher, and GM's sales mix is likely more lopsided in favor of more profitable vehicles than you realize.

All about the sales mix

You might be shocked to hear that as recently as 2014, passenger cars represented roughly 48% of new vehicle sales in America, according to GoodCarBadCar. But in recent years as the economy improved and SUV, crossover, and truck gas mileage increased, demand for these more profitable vehicles skyrocketed.

Having a sales mix favoring larger vehicles is critical to the bottom line, and General Motors' mix might make you do a double take: 80% of GM's first-quarter sales mix was of trucks, SUVs, and crossovers. In fact, the Chevrolet Trax, Equinox, and Colorado all set first-quarter sales records and the GMC Acadia posted its best quarter in its history. Cadillac's XT4 was the best-selling unit in its segment, and the popular Buick Enclave recorded a staggering 28% sales gain compared to the prior year.

GM's crossover sales increased 2.5%, and while combined pickup/SUV/van sales declined 8.8%, the two most important products in GM's lineup -- the 2019 Chevrolet Silverado 1500 and GMC Sierra 1500 crew cabs -- were up 20% year-over-year. The reason those two trucks are key is because they're so new they sell faster, and require much lower incentives to sell, which means juicier margins -- all factors that help offset slowing overall sales. In other words, while GM's 21% plunge in passenger car sales looks like a catastrophe, the truth is that those cars make up a vastly smaller proportion of total vehicle sales than many investors realize, and that's good news for GM's top- and bottom-line financial results.

What else are we missing?

Let's go one level deeper into GM's first-quarter data and highlight another beneficial factor of a sales mix favoring more SUV, crossover, and truck sales. These bigger vehicles are packed with more technology, features, and capabilities, and that comes with a hefty price tag. As GM's sales mix shifts to favor these larger vehicles, it's boosting the company's average transaction prices (ATPs). In fact, the automaker recorded its highest ATPs for any first quarter in company history.

One driving force of GM's impressive ATPs is none other than the all-new, full-size pickups from Chevrolet and GMC, which are off to a strong start and are recording strong sales with premium trims. In fact, ATPs for GM's all-new, light-duty pickups were a staggering $8,040 higher in the first quarter compared with their outgoing models in the prior year, according to J.D. Power PIN estimates. 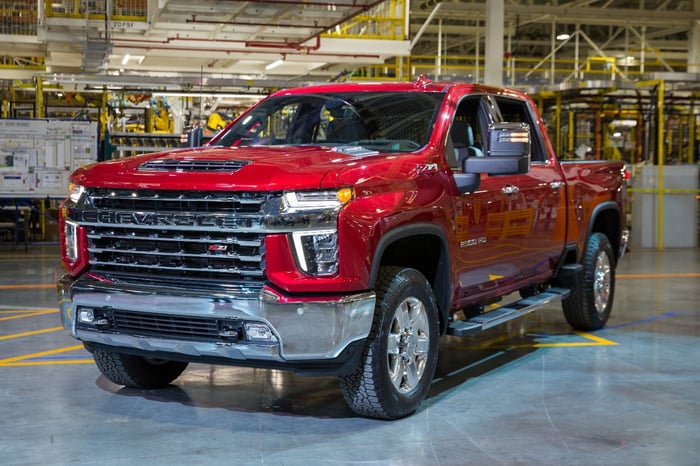 Understanding the importance of trucks

So far we've been able to put into context GM's sales mix, which favors larger and more profitable vehicles rather than inexpensive passenger cars, but just how profitable are those vehicles? Let's zero in on trucks, with a bit of key information from roughly a year ago when Morgan Stanley analyst Adam Jonas calculated that Ford's pickup trucks alone could generate 105% of its current total operating profit, and that General Motors' could be roughly 64.7%. While we don't yet have the freshest data from Jonas this year, you can bet the pickups are as important, if not more important, than ever.

If you're looking for more good news, you're in luck. "We are bullish on pickups and expect to gain sales momentum throughout the year," said Kurt McNeil, U.S. vice president, sales operations, in a press release. "We are installing capacity in Flint to build more HD pickups in total, more crew cab models, more dualies and diesel models, too, all in response to dealer and customer demand."

The good news doesn't stop there. According to J.D. Power PIN, GM's incentive spending as a percentage of ATPs was 13%, roughly a full percentage point higher than the prior year, and GM's per-unit first-quarter incentive spending was down $175 at a time when domestic competitors increased theirs.

In summary, it's very easy to latch onto headlines that tout GM's 21% decline in passenger car sales during the first quarter, or its total 7% decline, and that drop-off is not a positive development, to be sure. But when you dig into the data and understand GM's healthy sales mix -- which favors more profitable vehicles, increasing average transaction prices, and less dependence on incentives to move the needle on retail sales -- its first quarter appears to be much stronger than basic sales figures suggest.

That's even more true when you realize that despite a decline in Silverado and Sierra sales during the first-quarter, the sales of its next generation, and much more profitable, trucks are up 20% should offset overall weakness. While GM's 21% plunge in passenger car sales will negatively impact its first-quarter, more so on the top-line than the bottom-line, chances are its business is much healthier than that sales decline suggests, and 2019 should still be a strong year.