There's plenty to be excited about after AeroVironment (NASDAQ:AVAV) reported results for its fiscal 2019 third quarter. AeroVironment, a leading developer of unmanned aircraft systems (UAS) or drones, reported 38% revenue growth and a gross margin of 40%, both a year-over-year improvement.

However, what has me excited most are AeroVironment's efforts to partner with the National Park Service to aid in the recovery from the devastating Woolsey Fire and what that could mean for the commercial drone business. 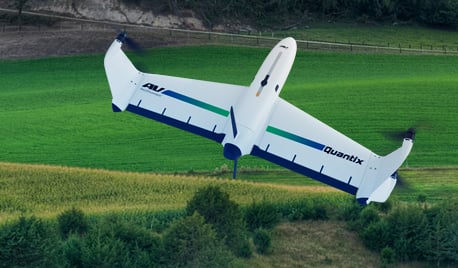 Strengthened by the Santa Ana winds, the Woolsey Fire burned 96,900 acres last November near Los Angeles, including 88% of the National Park Service lands within the popular Santa Monica Mountains National Recreation Area. To aid in the recovery, the National Park Service will be using AeroVironment's Quantix hybrid UAS to photographically map burned areas. The data collected will then be used to develop recovery plans for those areas and to monitor the long-term success of the recovery process.

Developed specifically for use in the agriculture industry, the Quantix drone integrates the Vertical Take Off and Landing (VTOL) capabilities of a multi-rotor drone with the long range advantages of fixed wing drones. This gives the Quantix the ability to take off without a long runway, while still enjoying a longer range than the multi-rotor drones with which most of us are familiar. AeroVironment advertises the range of the Quantix at 400 acres which will be very useful in surveying the 90,000-plus acres of affected land, much of which is in remote areas that are not otherwise easily accessible.

The Quantix drone incorporates some of the latest advancements in drone capabilities originally developed by AeroVironment for their military offerings. This includes fully automated take off and landing which is a significant plus making the drone simple to fly, even for novice users. High-resolution cameras collect both traditional and multispectral video which is used to develop maps showing ground coverage, foliage density, and plant health.

Once the data is collected, it can be easily imported into AeroVironment's cloud-based Decision Support System. This subscription-based software analyzes and reports back the data in easy to understand visualizations for the user to review. This makes planning, decision making and tracking of progress over time easier for users.

The case for commercial drones

While demand for military UAS has grown steadily, the commercial applications upon which many investors have based their investment thesis haven't materialized as quickly. However, a change in leadership, with Wahid Nawabi taking the CEO reins in 2016, has resulted in new emphasis placed on this sector for the company. Since Nawabi took over, the company has shed the less profitable Electric Vehicle division and is now focused solely on developing UAS for both the military and commercial sectors.

The Company's commercial drone program is still in its infancy, but the potential for growth is huge. The commercial drone market is set to explode over the next few years, growing exponentially from just 42,000 drones in 2018 to over 420,000 in 2021. The market for agriculture drones alone is estimated to be over $32 billion, and the total commercial drone market could be well over $100 billion. By comparison, AeroVironment's total revenue for 2018 was only $271 million with over 78% of revenue coming from military applications.

Unlike many other commercial drone manufacturers, AeroVironment doesn't have to rely on that part of the business to pay the bills. While the commercial market develops, there's still plenty of opportunity for growth in military drone programs to generate revenue for the company. Already a leading provider of UAS and Tactical Missile Systems to the U.S. government, AeroVironment has started to push into international sales. Last quarter, 36% of revenue came from abroad, and this looks set to increase going forward.

One of the best sellers to the U.S. Department of Defense (DoD) has been the Switchblade tactical missiles system. This small, portable missile system, weighing in at just under six pounds, has continued to see adoption in the U.S. military. AeroVironment has been working with the DoD to gain approval to expand sales of these munitions to our strongest allies across the globe.

Closer to home, the company is seeing success in winning UAS contracts with the military. The most recent DOD budget contained $170 million in funding for AeroVironment products. This includes $13.5 million for their Puma UAS and an additional $46 million for their Raven system. The company is also competing for a new contract to provide their Snipe UAS to the Army, which could provide $100 million in revenue over four years.

AeroVironment remains a smaller enterprise with a market capitalization under $1.6 billion, but the company has a solid balance sheet with no debt and $33 million of free cash flow generated in 2018. I'm excited about the future prospects of this little drone maker, in both the commercial and military markets, and I plan to add the company to my portfolio soon. I think you should consider doing so, too.