One of the first market darlings to report quarterly results this earnings season will be Netflix (NASDAQ:NFLX), and the stakes are high. The operator of the leading premium streaming video platform will step up with its first-quarter financials shortly after Tuesday's market close.

Netflix has been one of the market's best performers over the past six years, but there's a lot going on these days. Netflix decided to increase its prices during the quarter, just as one of its closest rivals lowered its rates. Along the way you have not one but two major challengers rolling out their offerings later this year. With the competition getting hungrier if not better, Netflix can't afford to show any signs of weakness in Tuesday afternoon's report. 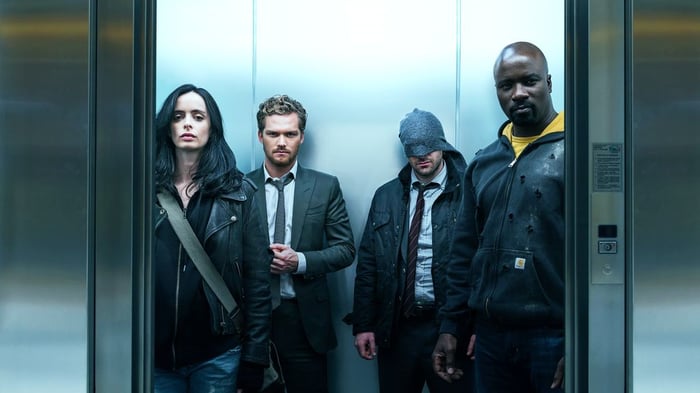 Is this elevator heading up or down? Image source: Netflix.

Living up to expectations

Netflix set the bar high when it initiated guidance for the first quarter three months ago, at least on the subscriber front, where it expects to close out period with 148.16 million streaming subscribers worldwide, a healthy 25% advance from where it was a year earlier and 8.9 million more accounts than when the year began.

Netflix has offered up conservative guidance in the past with a few rare exceptions, but a lot of things happened during the first three months of the year. Disney's (NYSE:DIS) now majority-owned Hulu said it was lowering prices for its most popular plan that offers limited ads just days after Netflix initiated its subscriber guidance. Hulu was already closing the gap on domestic subscribers, gaining 8 million net new users in 2018 against the growth of just 5.7 million domestic streaming accounts for Netflix last year. With Netflix bumping the price of its most popular plan by $2 to $12.99 a month just as Hulu was going the other way with its $2 price cut to hit $5.99 a month, it's never been more critical that Netflix hit its guidance.

We also saw Netflix reveal in February that will not offer up any more seasons of the two remaining shows it was still working on with Disney's Marvel. The media giant is currently in the process of pulling back its content available on Netflix ahead of November's Disney+ launch, but this move disappointed fans of The Punisher and Jessica Jones. The news could've had an unfavorable impact on subscriber retention for the quarter.

Revenue guidance for Netflix will be easier to clear. Netflix was eyeing $4.494 billion in revenue for the first quarter back in mid-January. The 21% year-over-year top-line growth would be its weakest increase since mid-2013. The increased pricing that Netflix announced in January -- but would roll out in later months to existing members -- should help accelerate revenue in the coming quarters. In short, the guidance Netflix offers up on Tuesday may be more important than the actual first-quarter financials.

Analysts will also want to know what CEO Reed Hastings thinks about Disney's new service. Disney stock hit an all-time high on Friday, with Netflix shares taking a 4.5% hit, after the unveiling of Disney+. Hastings has offered kind words on the competition in the past, but his tune might change now that the market's buzz is building for Disney+ just as Hulu is gaining in its rearview mirror in its home market. Netflix stock is essentially back where it was just before it announced its fourth-quarter results. It's a rare case of marching in place for Netflix over the past three months, and one way or another the stock is going to be a big mover on Wednesday.