The iPhone maker doesn't have the DNA or the right culture to compete with the streaming leader.

Investors hoping that the Apple (AAPL 0.90%) event on March 25 will finally mark the company's splashy entry into video streaming may be disappointed.

According to Recode, Apple isn't planning to launch a direct competitor to Netflix (NFLX 0.21%) or Hulu, but instead plans to bundle streaming services like HBO and Starz into its ecosystem and offer more convenient access to the streaming services. While Apple already takes a cut of in-app payments for such services, the difference will be that the iPhone maker is planning to add a more visible storefront on Apple TV and other Apple devices to use such streaming services.

Apple will be adding original programming, as has long been anticipated. The company has teamed up with stars like Reese Witherspoon, Jennifer Aniston, and Oprah Winfrey as well as top directors like Steven Spielberg and J. J. Abrams for a number of different shows. However, the thrust of Apple's initiatives appears to be the providing of a new portal to existing services rather than emphasizing Apple's own original programming.

Though financial pundits have waited for years for Apple to mount a challenge to Netflix, with many even suggesting that Apple should acquire the streaming service outright, Apple is not going to play that game, or at least not to anywhere near the extent Netflix has. Here's why.

Check out the latest earnings call transcripts for Apple and Netflix. 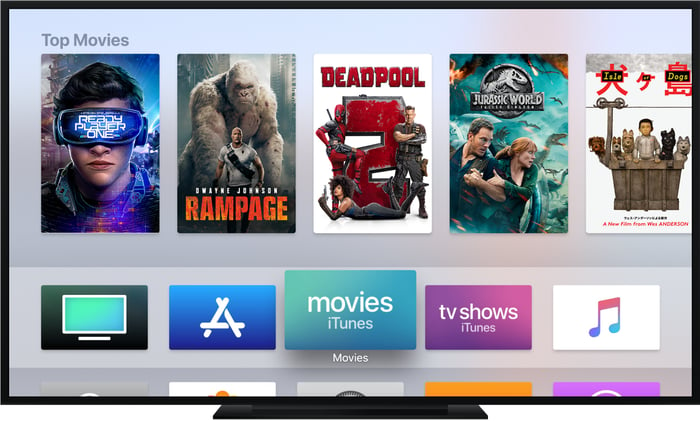 Netflix is a disrupter, and to be a disrupter you have to take risks. Netflix has upended the entertainment industry several times over, first with its DVD-by-mail service, then by pioneering streaming, and finally by spending billions on original content, challenging traditional studios and changing the way Hollywood does business.

Apple under Tim Cook, on the other hand, has been characterized by an aversion to risk. Cook has steered the company away from developing the kind of breakthrough products like the iPod and iPhone that revolutionized the tech world more than a decade ago. Instead, the company has focused on incremental improvements to the iPhone and parlaying the company's product ecosystem and installed user base of 1.4 billion users into its fast-growing services segment, which includes the App Store, Apple Music, Apple Pay, and other add-on businesses that rely on its trademark smartphone.

Unlike other tech giants, Apple has also resisted making big acquisitions and has instead returned more than $300 billion to shareholders through share buybacks and dividends.

Apple's odyssey in television leading up to Monday's event perhaps best illustrates the company's culture of risk aversion. Apple launched the Apple TV set-top box over ten years ago, but until now, the company has never really taken a next step despite years of agonizing over its television ambitions. Even Steve Jobs struggled to convince TV and movie studios to license content to Apple the way record companies licensed content for iTunes, and the company never made a stand-alone television set, as some hoped it would.

In 2017 Apple took baby steps into original content, launching two shows, Carpool Karaoke, which it borrowed from The Late Late Show with James Corden, and the Shark Tank-inspired Planet of the Apps, but they both flopped.

Now Apple has several shows lined up with A-list talent, but already reports have surfaced that the talent is chafing under the tech giant's control. According to The New York Post, Hollywood heavyweights have balked at the company, calling it "difficult" to work with and complaining of excessive meddling and "intrusive" executives, including CEO Cook. Several rounds of notes from company execs have caused production delays, and Apple has called on creative talent to avoid controversial storylines and embrace a positive view of technology. One of Cook's favorite admonitions is, "Don't be so mean." That approach may doom Apple's creative push, as many hit shows in recent years have revolved around some kind of controversial topic, including The Sopranos, Breaking Bad, Mad Men, House of Cards, and Transparent.

Part of Apple's problem seems to be that the company doesn't want to risk any harm to its brand or to tie it to a controversial topic because that could potentially inspire a backlash and jeopardize device sales. That's an issue that a stand-alone streamer like Netflix doesn't have to worry about. Apple's philosophy also flies in the face of Netflix's hands-off approach to original content, which has won over talent like Grey's Anatomy creator Shonda Rhimes and Glee creator Ryan Murphy and won plaudits from several show runners. Netflix has also been willing to embrace failure, as it knows some shows won't pan out, and its CEO Reed Hastings even encouraged his content division to take more risks because not enough shows were failing.

The other challenge for Apple in original content is that the streaming industry has not proven very lucrative thus far. It took Netflix nearly a decade to generate significant profits from streaming. Hulu, meanwhile, is still operating at a loss, and Amazon (AMZN 2.57%) sees video as basically a free giveaway to entice Prime members. Disney (DIS 0.84%), which is set to launch its own Disney+ streaming service, packed with a healthy library of content from Marvel, Pixar, and LucasFilm, among its other properties, has acknowledged that it will lose money on streaming at first as it builds out an audience.

For Apple, then, which set aside around $1 billion for its current round of programming, to attempt to truly compete in a low-margin industry, even with its giant cash hoard, may just be throwing good money after bad.

Leveraging its user base and device network could be the best way for the company to enter the streaming foray, but it won't shake up the industry as some have been expecting. We'll learn more when Apple finally lifts the curtain on Monday.