Find out why these three stocks could crush the market.

Not every company you back will be a winner, but owning just a few high-performance growth stocks among all your picks and holding tight as those companies enjoy winning streaks can take your portfolio to the next level and be a life-changing experience.

With that in mind, we asked three of our Motley Fool contributors to identify a stock that has the potential to dramatically outperform the market over the next 10 years. Read on to see why they think Kratos Defense & Security (KTOS 1.65%), lululemon athletica (LULU 2.46%), and Baozun (BZUN 1.44%) have characteristics that could lead to massive returns. 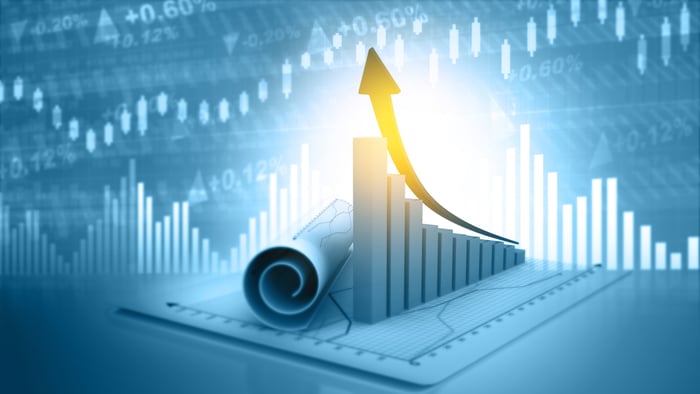 After years of overpromising and failing to deliver on profits, Kratos is starting to come into its own. Last year, the company delivered positive GAAP profits in each of its last two quarters, and it was free cash flow positive across the second half  of the year. While overall sales growth is still ramping up, Kratos reported last month that its unmanned aerial vehicles division grew sales 75% over the past two years and is poised to grow 90% in 2019 alone.

In particular, the "tactical drone" projects that have become Kratos' hallmark are gaining momentum, with no fewer than 10 separate projects in various stages of development, and are expected to begin adding to the company's revenue stream over the next couple of years. These could translate into hundreds, or even thousands, of orders for new small tactical drones from various branches of the U.S. military. At prices up to $3 million per drone sold, it shouldn't take long for the company's combat drone business to eclipse the $130 million-odd in sales it made last year from its legacy target drone business.

If all goes as planned, I see big things and huge growth ahead for Kratos over the next decade.

Not as much of a stretch as you might think

Demitri Kalogeropoulos (Lululemon): I'm not going out on a limb in saying that lululemon athletica should post strong growth in 2019. After all, the athletic apparel specialist logged a 24% revenue spike over the past 12 months. Yet its latest operating results suggest investors can think bigger than just a short-term sales boost for this stock.

Take gross profit margin, for example, which climbed by more than 2 percentage points to reach 55% of sales in 2018. This boost came from success at introducing new products that resonate with its active customer base. Lululemon protected market share from rivals such as Nike (NKE 4.55%), too, even as it extended into new categories including outerwear.

These competitive wins suggest the retailer will surpass management's goal of achieving $4 billion of annual sales by 2020 while profitability keeps inching higher. But the truly exciting prospect for investors is the chain's hope of expanding into new geographies beyond its current focus just in Canada and the United States.

Lululemon is looking to boost its presence in China while entering the likes of France and Germany over the next few quarters. With its digital business already accounting for 25% of sales, such an expansion might be quicker than Wall Street assumes. The company must stay ahead of shifting customer tastes while avoiding quality control issues. If it can keep that up, then its sales base should be far larger than $4 billion in a decade.

Keith Noonan (Baozun): Companies such as Amazon.com and Shopify are familiar to many investors for helping to facilitate the e-commerce revolution and delivering great returns to shareholders. Baozun is a Chinese e-commerce company that's probably not as well known to most American investors, but its stock could feasibly outperform those online retail leaders over the next decade.

Baozun is sometimes referred to as "the Shopify of China" because both companies provide businesses with customizable e-commerce websites and related support services. The comparison to Shopify can be a helpful way to explain what the company does, but there are some pretty big distinctions between the two as well. While Shopify provides services to small, medium, and large-size businesses, Baozun has been much more specific in its focus.

The Chinese e-commerce company's business revolves around helping big Western brands such as Nike and Microsoft tap into the country's massive and fast-growing online retail market. That's a great niche to be in. Despite accounting for more than half of the world's online retail spending, China's e-commerce market is still growing faster than the worldwide average -- expanding 24% in 2018, compared with a 18% global growth rate. Baozun has huge potential for growth as it brings more brand partners on board its platform and its partners see rising sales through its channels. The company might even take a page out of Shopify's playbook and open the platform up to small, domestic businesses.

Baozun is currently valued at roughly $2.4 billion, or roughly 28 times this year's expected earnings. That's a valuation that leaves the potential for massive growth if the Chinese middle class and per-household discretionary spending continue to expand, and I count the stock as one of the most exciting and promising in my portfolio.