Please ensure Javascript is enabled for purposes of website accessibility
Log In Help Join The Motley Fool
Free Article Join Over 1 Million Premium Members And Get More In-Depth Stock Guidance and Research
By Travis Hoium - Apr 18, 2019 at 8:22AM

But can any gaming company that would want it actually afford to buy it?

It appears that Carl Icahn is getting his way at Caesars Entertainment (CZR)-- the company will (eventually) put itself up for sale or try to sell some of its assets. The New York Post is reporting that Tilman Fertitta, who owns the Golden Nugget Casinos and the NBA's Houston Rockets, has already been invited to do due diligence on the company, and soon he may not be alone.

Only a month ago, Caesars Entertainment was trying to improve the business on its own and ride the wave of slow but steady growth in Las Vegas. But then Carl Icahn bought a 15.5% stake in the company and demanded board seats (which he got) in an effort to push for a sale. Maybe a deal will get done, but the market doesn't think it'll add much value for current investors, and this isn't the time to speculate on another big gaming buyout. 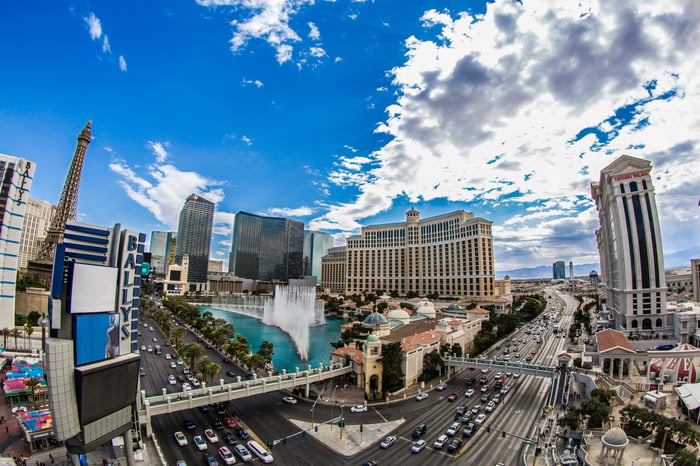 Skepticism of a Caesars acquisition

Usually, when a company announces that it's up for sale, its stock price jumps. Buyout deals normally are agreed to at a premium for the selling company, so investors try to front run the premium that a buyer might pay. That hasn't happened with Caesars Entertainment. Shares are still trading within the range where they've been drifting for the past three months, and closed Tuesday 17% lower than where they sat a year ago.

The market is certainly skeptical about the prospects for a deal, and with good reason. Caesars is saddled with nearly $9 billion of debt, and it no longer owns most of its real estate (often seen as a backstop for debt) after VICI Properties (VICI 2.69%) took most of its properties in its bankruptcy restructuring. A buyer would have to find more than $15 billion to finance an acquisition, and that's before accounting for any kind of buyout premium. 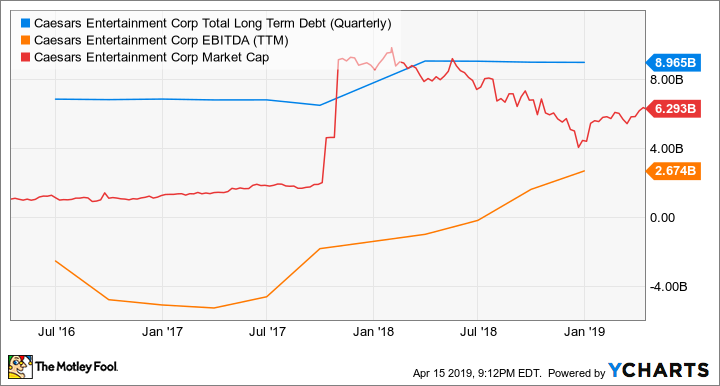 We don't know much about Fertitta's ability to buy Caesars, given the fact that Landry's, through which he owns most of his operations, is privately held. But if reports are correct and Fertitta has started his due diligence, it's easy to cast him as the front runner. He already owns Golden Nugget Casinos, and seems keen on growing his gaming empire.

Eldorado Resorts (ERI) has also been floated as a potential buyer, which would be a bit of a shock given that, with a market cap of around $3.8 billion, it's only about two-thirds the size of Caesars Entertainment. Still, the company has been an aggressive acquirer of regional resorts over the last few years, and has willingly taken on debt to make deals happen. Buying Caesars would be a tall order, but if Eldorado used stock as a key part of the bid, it could be possible.

Outside of those two, there aren't any obvious candidates. MGM Resorts wouldn't likely be able to acquire the other large operator on the Las Vegas Strip, and Wynn Resorts and Las Vegas Sands wouldn't be interested in going down-market with Caesars' properties. A hotel chain or private-equity firm might step up, but those are both long shots, given that hotel companies have largely divested themselves from Las Vegas, and private-equity ownership led to Caesars' last two bankruptcies.

How will Icahn win this one?

Icahn always seems to come out on top in Las Vegas -- he sold Stratosphere and Fontainebleau Las Vegas at large profits. So he may have some tricks up his sleeve with Caesars Entertainment, and the company already looks like it has quietly put itself on the auction block. Now, will someone take a huge bet, buy it, and pay Icahn the premium he hopes for? Time will tell -- but I have my doubts.