Shares of Sleep Number (NASDAQ:SNBR) were sinking today after the mattress maker missed top-line estimates in its earnings report, and the company failed to raise its earnings outlook despite a strong bottom-line result. Consequently, the stock was down 19.5% as of 1:49 p.m. EDT.

Sleep Number said comparable sales rose 5% in the first quarter, which along with new stores drove overall revenue up 10% to $426.4 million. However, that figure was shy of estimates at $427.5 million. 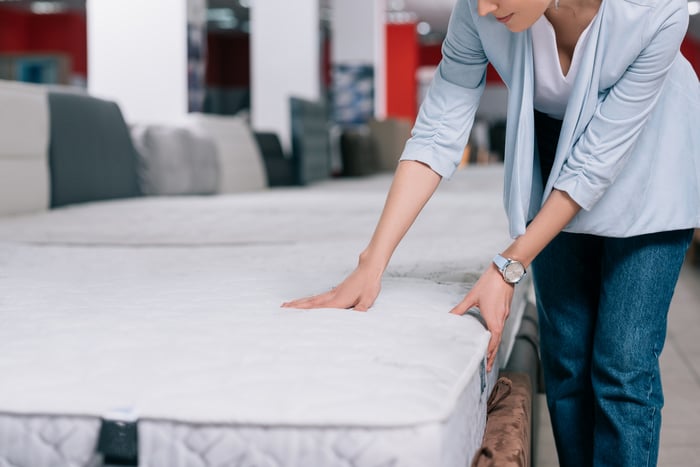 Still, the comparable sales growth helped drive operating leverage as gross margin improved 40 basis points to 61.5%, and operating income increased 22% to $32.7 million. Earnings per share jumped from $0.52 to $0.80 due to aggressive share buybacks, which easily beat expectations at $0.73.

Despite the strong results, Sleep Number declined to raise its earnings guidance for the year, maintaining its outlook at $2.25 to $2.75 and sales increase of 6% to 10%. That may have spooked investors, as it seems to indicate that growth will slow over the rest of the year. Management also forecast that its second-quarter earnings would fall slightly as it laps a tax benefit from the year before. Considering its share count has fallen by nearly 20%, the company's EPS should get a lift even if its underlying performance doesn't improve.

Sleep Number shares had surged more than 50% year to date as well, so today's sell-off may partly be a correction for that surge.