The GAO is poking holes in the Pentagon's estimates. What does that mean for the contractors banking on this program for growth?

The forthcoming Columbia-class ballistic missile submarine, a key cog in the U.S. military's nuclear deterrence strategy and the nation's most expensive shipbuilding program to date, is likely to come in well over its $115 billion total construction budget, a government watchdog has concluded.

The Navy is being "overly optimistic" in estimating the cost of the Columbia fleet, according to a recent Government Accountability Office report, with the GAO warning that the estimates are "unrealistic," given the realities of the shipbuilding market. The government intends to buy 12 Columbia-class submarines, to be built by General Dynamics (GD 0.47%) with support from Huntington Ingalls (HII 1.73%). Construction is set to begin in 2021.

The stakes for this program are huge because the current-generation Ohio-class submarines are coming up on the end of their life span as they run out of nuclear fuel. If the Navy is unable to stick to its timetable of having the first Columbia-class sub in service and performing patrols by 2031, the U.S. could fall below the number of ballistic missile submarines in service that it claims is necessary to maintain a continuous strategic deterrent.

The financial risk of moving fast

The GAO has several reasons to sound the alarm. Most notably it says that when the Navy estimated its total cost, it did not include any margin in its estimate for labor and other cost overruns. The Pentagon responded to the GAO that it continues to update its estimate, but it is possible an independent assessment of labor costs and other forecasts will not be done by the time the Navy makes its formal fiscal 2021 budget request. 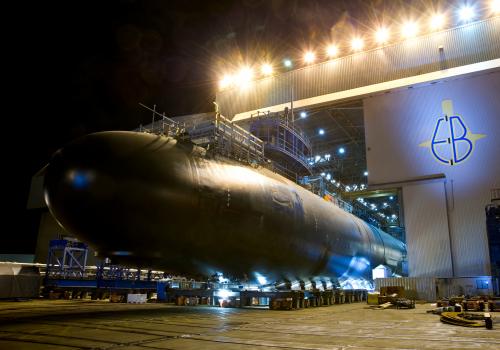 "Without these reviews, the cost estimate -- and consequently, the budget -- may be unrealistic," the GAO wrote. "A reliable cost estimate is especially important for a program of this size and complexity to help ensure that its budget is sufficient to execute the program as planned."

The Navy is in the process of ordering certain components despite not having a finalized design, a plan that it hopes will speed construction but could lead to costly reworks if a design element were to change. The GAO is also worried that the Navy is being overly optimistic in estimating cost savings from buying components in bulk, noting the estimates are "higher than those historically achieved by other such programs."

There's no risk to the contractors that this program will be canceled. The GAO said the most likely scenario is that the Pentagon will be forced to go back to Congress and ask for additional funds in order to remain on schedule. The agency did not provide an estimate of how much more would be needed, referring instead to a report by the Congressional Budget Office that concluded the Columbia program could end up costing as much as $145 billion.

But even if there isn't a cancellation risk, there is still potential exposure for the industry to deal with. The Pentagon or lawmakers could try to squeeze contractors in order to minimize additional expense or request the industry swallow some of the overages. Higher per-unit costs could also jeopardize the Navy's desire to eventually buy more than 12 subs, cutting off the potential for additional upside to GD and its partners.

Stress on an overburdened supply base

Although construction is not expected to begin before 2021, the Columbia program has already been marred with deficiencies. Developing the software to design the new sub was so difficult, it required the hiring of dozens of additional engineers. And last August, faulty welding was discovered in missile tubes headed for the Columbia. The problem was linked to one subcontractor, and military officials hope it will not delay or add substantially to total program costs, but it was an inauspicious start for the Columbia and a reminder of how quickly things can go off-track.

This surge of new orders comes at a time that the nation's military shipbuilding capacity is fragile. Over the past 60 years, 14 defense-related new construction shipyards have closed and another three have left the defense industry, while only one new shipyard has opened. The Navy recently altered its purchase plans for the next block of separate Virginia-class attack submarines, deciding against buying an altered design with greater missile capabilities in favor of the lower-cost standard design. Because construction plans and shipyard schedules are developed years in advance, the last-minute change threatens to cause workflow disruptions, which could ripple into future projects including the Columbia-class work.

It all adds up to a manufacturing base that is vulnerable to setbacks, delays, and cost overruns. The yards are also being asked to pick up an increasing share of the maintenance work required to keep existing vessels in the water longer. The Navy's internal maintenance capacity is maxed out, pushing some work on its Los Angeles-class subs and other vessels to the General Dynamics and Huntington Ingalls yards that are also gearing up to support the Columbia and Virginia work.

This ship will sail

It's likely Navy officials would agree with some of the GAO's conclusions, in particular the concerns about the frailty of the shipyards. The Pentagon has advocated investments to try to strengthen the nation's military yards, and given the importance of the Columbia program, the GAO's warning could help persuade Congress to earmark additional funds for the shipbuilders to try to ensure that adequate capacity is in place.

The Navy would likely also argue that the advanced purchases and design effort ahead of the formal requisition in fiscal 2021 is prudent even if the cost estimates are premature because it allows added time for prototyping and scrutiny that may help the final manufacturing process go smoother.

For defense investors, and General Dynamics shareholders in particular, rest assured the Columbia is on its way and will be a flagship program for the company for a decade to come. But also be ready for the inevitable criticisms if construction gets delayed or costs skyrocket, just as Lockheed Martin experienced with the F-35, and try not to overreact to potential critical headlines or temporary setbacks.

The Navy has made Columbia its top priority. Darn the costs, full speed ahead.