The facts and details behind the IT security company's first-quarter earnings report.

Network security company Check Point Software Technologies (CHKP -2.29%) started off 2019 by delivering a mixed set of first-quarter earnings. The initial market reaction to the earnings wasn't positive, but as ever, the devil is in the details. Let's take a closer look at what happened in the quarter.

All told, revenue expanded 4%, but an 11.2% increase in operating expenses to $265.7 million meant operating income declined to $206 million from $213.4 million in the same quarter last year. 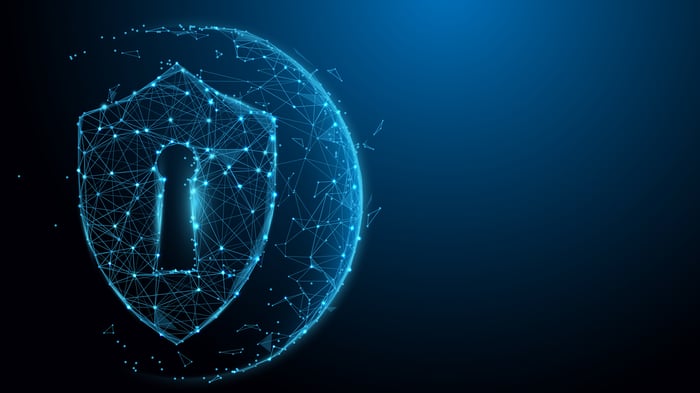 As for near-term and full-year guidance, management bracketed the analyst consensus for both revenue and earnings:

Again, Check Point's guidance is solid enough, but aside from the decline in operating income as a result of rising operating expenses -- which rose by $27 million to $265.8 million -- there were a couple of trends in the earnings that may have caused some concern.

Going back to the third quarter of 2017, when Check Point's management first disclosed "execution challenges" in the U.S., there have been question marks around its sales and marketing efforts in its largest end market. Management took action to restructure its sales organization and strategy, and by the second half of 2018, an improvement seemed to be in place.

However, the first quarter brought a disappointing performance, with Americas-region revenue similar to that in last year's first quarter. Management put the performance down to its own execution in the U.S., with CFO Tal Payne stating that "Europe did well and America still needs to improve." 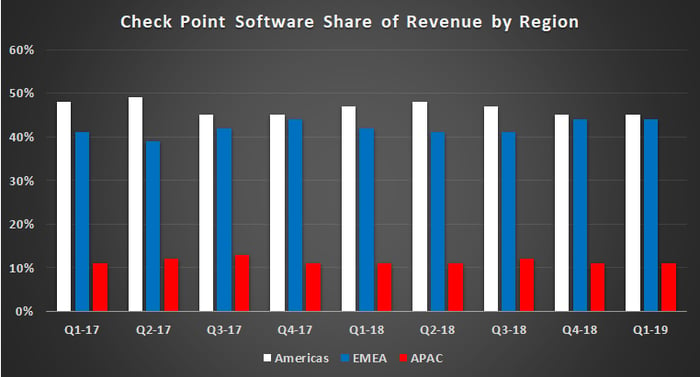 The second possible concern is that product and license revenue continues to decline. This is not such a major issue, as Check Point bundles its software blades with its products, and revenue has been shifting toward subscription-based sales for some time -- the key is overall revenue growth.

However, top-line growth has remained below 5% for the past six quarters in a row, and it's hard not to conclude that Check Point could do with some product sales growth to increase its installed base and generate future software-based revenue. 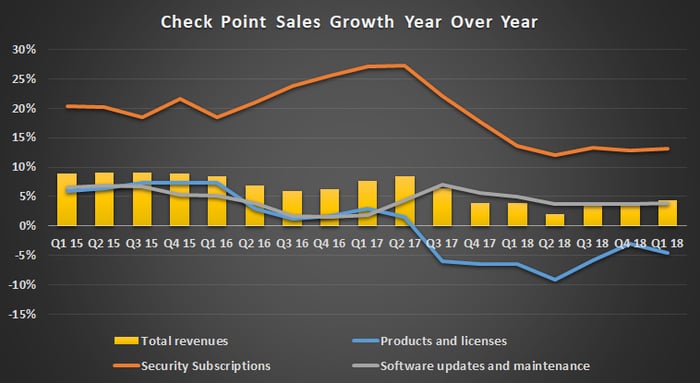 Check Point is the established leader in its field, and it has a nearly 90% gross margin to boot. As such, it's currently a low- to mid-single-digit revenue growth company with very high free cash flow generation (free cash flow equaled 78.2% of revenue in the first quarter). Given this profile, investors likely hope the company can hold its margin in the future while maintaining some revenue growth prospects.

Clearly, Check Point intends to execute better in the U.S. in the coming quarters, and investors will expect the company to keep its operating expenses under control as it seeks to do so.