Intuitive Surgical's (NASDAQ:ISRG) systems were originally conceived of as tools to help military surgeons operate on soldiers from afar. While that particular application hasn't panned out, the company was the first to market with a robotic surgical system, and its daVinci machines have enjoyed a huge headstart on the competition.

But recently, bigger players have entered the fray. The stock fell in the wake of its latest earnings report, but it still trades at an expensive valuation. All of this is to frame the debate: Is Intuitive Surgical stock still a buy? 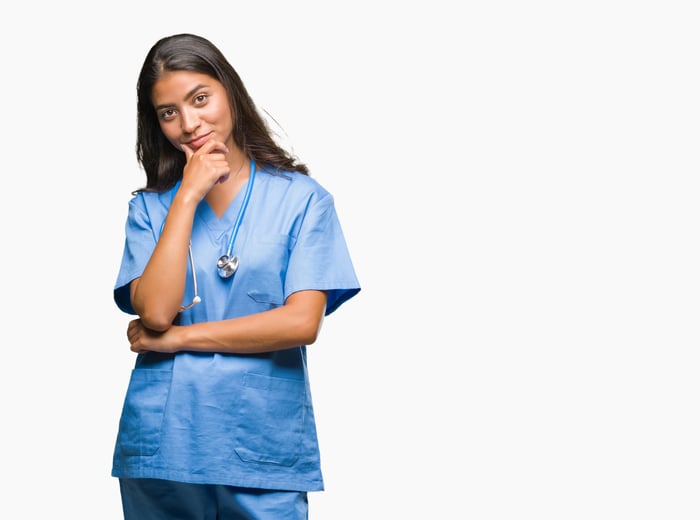 I won't bury the lede any deeper: I fervently believe the stock is a buy. And those aren't empty words, as shares of Intuitive Surgical account for 4% of my family's real-life holdings.

But my stance on the stock is not without caveats and nuances. To get a better idea for what I mean, let's look closer at the the bear and the bull arguments for Intuitive Surgical.

The argument against: high-priced and facing new competition

The biggest knock against investing in Intuitive Surgical right now is its sky-high stock price. Before last week, shares had advanced almost 10,000% over the previous decade. Even after the recent slide, the company still trades at a hefty premium:

And then there's the competition. Medtronic is already a juggernaut in healthcare, and it is positioning a machine in direct competition with Intuitive's daVinci. Medtronic's acquisition of Mazor Robotics last year makes it an even more formidable competitor.

Even if these companies don't steal market share from Intuitive Surgical overnight, its margins could be meaningfully compressed over time, as it will have to cut its prices to compete with new entrants.

The argument for: solid financials, a wide moat, and optionality

While competition is coming for Intuitive Surgical, there's something crucial to understand about this company: It benefits from both high switching costs and network effects.

Let's unpack those advantages, starting with the switching costs. When a hospital decides to fork over $1.5 million for a new daVinci machine, it's a serious investment. Currently, there are over 5,000 such machines installed globally, and more than 40,000 doctors have devoted significant time to training on the daVinci platform. Switching to a competing product would not only mean all that money down the drain, but it would render all that training a waste of time.

Furthermore, Intuitive benefits from a sneaky network effect. Each additional surgeon who uses the daVinci, and each patient they use it on, fortifies the overall platform. These slow-building effects are incredibly powerful.

If those upsides aren't enough to convince you Intuitive deserves your cash, there's also this: Intuitive is increasingly becoming a model of financial fortitude. Currently, it's sitting on more than $5 billion in cash, it carries no long-term debt, and it has produced almost $1 billion in free cash flow (FCF) over the past year. The board also has authorized a $2 billion share buyback, which will boost the value of shares already held by investors.

And if you're worried about margins falling due to the arrival of competition, know that Intuitive has been investing aggressively in research and development (R&D) for the past two years to find and chase new opportunities.

If you're enthralled by this worthy investment, a word of caution: Don't buy your entire position all at once. The stock is still expensive. Competition may soon start putting pressure on Intuitive. I think it's far more prudent to buy a "starter position" now, using about one-third of the total amount you'd like to eventually allocate toward Intuitive.

Over time, you'll learn to keep cash reserves handy so you can take advantage of quick dips in the stock price, like the one we're seeing this week, to add to your position at a more attractive price. If the stock just keeps going up, you'll have some skin in the game at least. If not, you'll be glad you've got more to invest when the time is right.