The stock has been on a tear, so Starbucks has a lot to prove.

After hitting all-time highs in mid-2017, Starbucks (SBUX -4.44%) faced a rough patch. Over the course of the next year, the coffee purveyor lost a quarter of its value. What caused the slide? Falling sales comps from its inability to meet demand during the morning coffee rush and weakening afternoon sales as customers abandoned its blended frozen drinks.

Since taking steps to mitigate those issues, Starbucks has come roaring back, gaining 55% since last July and marking new all-time highs. While challenges remain, Starbucks has been making good on its promise to improve comps.

Investors will be watching closely to ensure that the growth story continues when Starbucks reports its second-quarter financial results after the market close on Thursday, April 25. Let's recap the company's first-quarter results and recent events to see if they provide any insight into what investors can expect when Starbucks reports earnings. 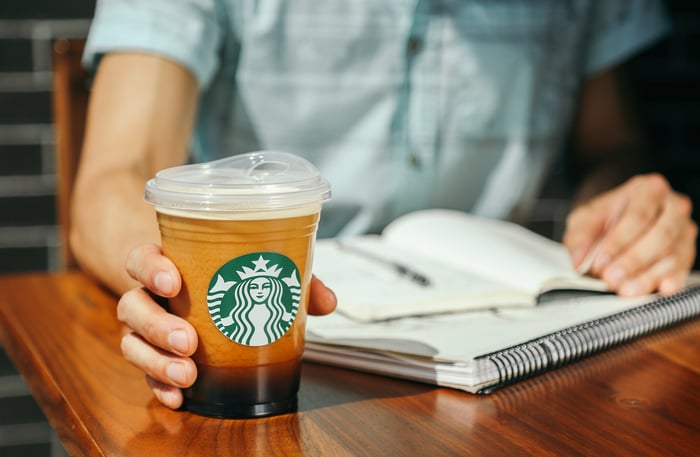 For the first quarter, Starbucks reported revenue of $6.6 billion, an increase of 9% year over year, and adjusted earnings per share of $0.75, up 15% compared to the prior-year quarter. Global comparable-store sales grew 4%, driven by a 3% increase in the average ticket.

Starbucks has been pinning a great deal on attracting new members to the Starbucks Rewards loyalty program, which grew by 1 million customers, to 16.3 million active members in the U.S., up 14% year over year. Rewards transactions now account for 40% of the amount tendered at Starbucks' U.S. locations. Additionally, between digitally registered and active Rewards customers, Starbucks is approaching 30 million digital connections in the U.S.

In order to boost adoption of the Starbucks Rewards program, the company recently announced additional enhancements to the program. Now, members can immediately begin earning and redeeming rewards from day one in as few as two to three visits. Starbucks has also replaced the single option with a new, tiered rewards system, which will offer customers additional ways to redeem their rewards.

In another move, Starbucks has partnered with Valor Equity Partners to create its own venture capital fund -- Valor Siren Ventures 1. "The new fund will identify and invest in companies that are developing technologies, products, and solutions relating to food or retail," according to the press release.

Starbucks doesn't provide a quarterly forecast but updated certain measures related to its full-year guidance. The company anticipates revenue growth of between 5% and 7% -- or about $26.2 billion at the midpoint of its guidance -- and is forecasting earnings per share in a range of $2.32 to $2.37. Management is also expecting global comparable-store sales growth of between 3% and 4%, and plans to open approximately 2,100 new Starbucks stores globally.

Wall Street is happy to fill in the blanks for the quarter, but investors should guard against falling into its short-term mindset. Analysts' consensus estimates are calling for revenue of $6.31 billion, an increase of 4.7% year over year, and earnings per share of $0.56, up about 5.7%.

With significant gains in its share price in recent months, Starbucks has a lot to prove to investors if it wants to maintain its upward momentum. We'll know more when the company reports earnings on Thursday, April 25.