Tesla fell after reporting a loss in Q1, but Facebook rose on strong growth.

Stocks opened lower Thursday but recovered somewhat to end the session with mixed results as investors parsed earning reports. The Dow Jones Industrial Average (^DJI 0.61%) fell, mainly due to disappointing results from 3M, but the S&P 500 (^GSPC 1.10%) was basically flat.

As for individual stocks, shares of Tesla (TSLA 10.97%) dropped after a disappointing quarter, while those of Facebook (META 4.10%) rose on strong revenue growth and profit. 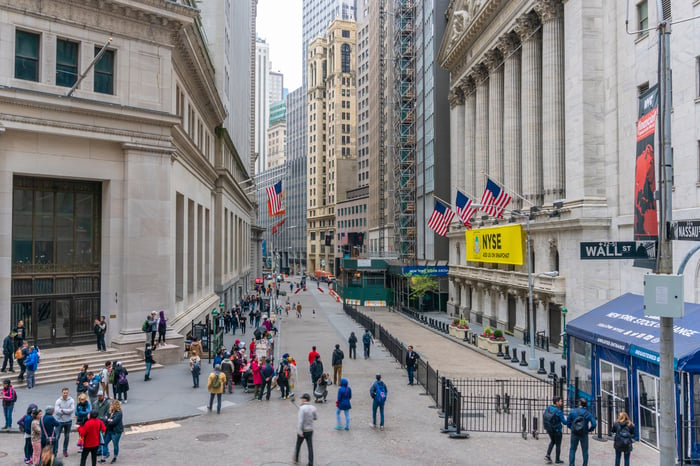 A quarter to forget from Tesla

Tesla's first-quarter results missed Wall Street's estimates by a mile, and shares fell 4.3%. Revenue grew 33.2% year over year to $4.54 billion but was down 37.1% from Q4 and missed the analyst consensus of $5.33 billion. Non-GAAP loss per share of $2.90 was an improvement over the $3.35 per share the company lost in the period a year ago, but Tesla had a per-share profit of $1.93 last quarter.

The main causes of Tesla's problems in the quarter were already known, after the company reported delivery numbers three weeks ago. The launch of the Model 3 in overseas markets resulted in large number of the vehicles in transit, growing inventory and shifting revenue from them to Q2. Combined with the repayment of a $920 million convertible bond, cash and cash equivalents fell $1.5 billion to $2.2 billion and operating cash flow was negative $640 million.

Tesla also said that demand for Model S and X was affected by the reduction of the federal electric vehicle tax credit and deliveries suffered because the demand for the performance variants of the cars exceeded production. But on the conference call, CEO Elon Musk said the company was updating the S and X with next-generation powertrains and increasing their range, leading him to expect demand for those models to recover and to reiterate full-year guidance.

Investors give a thumbs-up to Facebook's fundamentals and plans

Facebook is taking a $3 billion charge to cover an expected fine from the Federal Trade Commission, but investors overlooked that and focused on its Q1 revenue growth and profits, and shares gained 5.9%. Revenue increased 26% to $15.08 billion, exceeding the $14.97 billion analysts were expecting. Earnings per share came in at $0.85 including the legal expense accrual, but excluding that jumped 11.8% to $1.89, compared with the analyst consensus of $1.63.

CEO Mark Zuckerberg devoted much of his time on the conference call outlining changes Facebook is making to its platform to make its services privacy-focused and to support new tools for payment and commerce. That story and strong fundamentals propelled the stock today.