Marine and fitness product maker Brunswick Corp. (NYSE:BC) reported lukewarm results in the first quarter. Investors reacted with a call to abandon ship during Thursday trading, sending the shares down 10.98% on the earnings report and a gloomy outlook from a major U.S. boat retailer.

Brunswick, a maker of recreational boats and fitness equipment, reported first-quarter adjusted earnings of $0.99 per share, a penny better than estimates, on revenue of $1.05 billion, which fell short of the consensus $1.29 billion estimate. A year ago, the company announced plans to split off its fitness business, which sells exercise equipment and game tables, as an independent company to focus on its recreational boat and accessory operations.

The marine business -- which includes Bayliner, Lund, Cypress Cay, and a number of other boating brands -- saw net sales grow 8.7% year over year and operating margin climb 110 basis points to 10.9% on a GAAP basis, helped by the 2018 acquisition of the marine aftermarket business of Power Products. 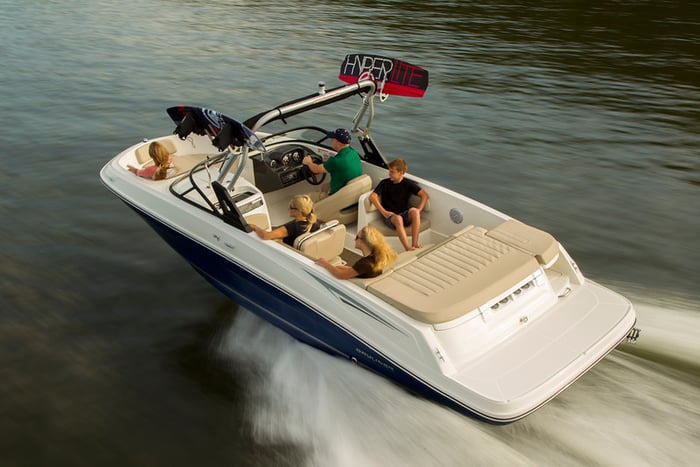 Brunswick was somewhat cautious on the full-year forecast, predicting adjusted earnings of $4.80 to $5.05 per share. The midpoint of that range falls below the $4.96 analysts are expecting.

CEO David Foulkes, in a statement accompanying earnings, said the marine selling season began a little later than expected in 2019 due to lingering winter weather in much of the U.S., adding, "We believe that global unit market demand for the year will reflect modest growth."

A weak forecast from boat retailer MarineMax likely also weighed on Brunswick investors. The country's largest recreational boat retailer cut full-year earnings guidance to a range of $1.75 to $1.85 per share, from $1.85 to $1.95, and said softer-than-expected unit sales are weighing on profitability.

Brunswick shares have been hitting rough waters of late, down more than 15% in 2018 on growing concerns about the economy. But they made most of that back in the first four months of 2019, before Thursday's drop. The stock after Thursday's fall is trading at less than 1 times sales, well below the 1-to-1.4 multiple it has reached over most of the past five years, despite the company's forecast that it will grow marine sales by 8% to 10% this year.

The planned sale of its fitness segment, coupled with the addition of the Power Products business -- which should bring greater exposure to the market for spare parts and accessories -- ought to create a streamlined company with a compelling portfolio of marine recreational products that will hold up better than the industry in general if the economy turns and consumers spend less on luxuries.

Brunswick looked attractive heading into earnings, and there was nothing in the report that would justify a rush for the exits. Don't expect this stock to continue to take on water in the weeks to come.