As a result, Chipotle stock plunged from a high of more than $750 in mid-2015 to less than $300 by early 2018. However, Chipotle started to get back on track after Taco Bell veteran Brian Niccol replaced founder Steve Ells as CEO a little over a year ago. Niccol has revitalized the fast-casual chain with more aggressive marketing techniques, new menu items, and an increased focus on digital sales. This has helped the stock rebound. 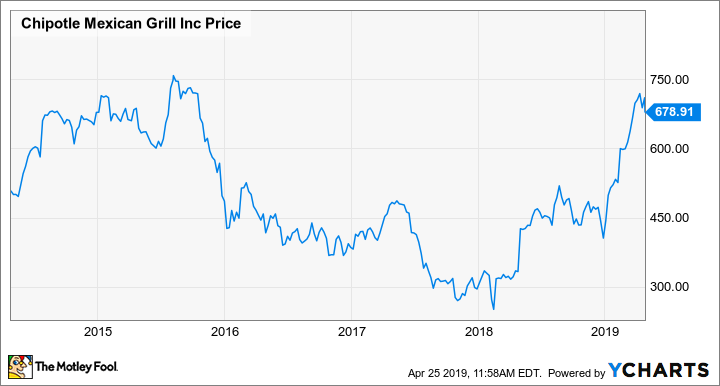 Chipotle's sales and earnings recovery continued to accelerate last quarter, with the company's results surpassing its guidance and analysts' expectations. Let's take a look at what this means for Chipotle investors.

In 2018, Chipotle's comparable restaurant sales rose 4%. For most of the year, Chipotle reported falling same-store transaction counts and relied on price increases to drive its comp sales growth. However, by the fourth quarter, traffic trends had returned to positive territory, powering a 6.1% comp sales gain.

The vast majority of Chipotle's comp sales growth last quarter was driven by rising digital sales through its mobile app and website. Digital sales doubled year over year, accounting for 15.7% of total sales in the first quarter.

Meanwhile, earnings per share surged 47% to $3.13. Excluding various restructuring costs, adjusted EPS skyrocketed 60% to $3.40. Chipotle's EPS results comfortably surpassed the analyst consensus of $2.99 with or without those adjustments.

But the earnings numbers aren't as good as they seem

That level of comp sales growth would typically unlock ample operating leverage, meaning that earnings would rise at a much faster rate due to margin expansion. At first glance this seems to be exactly what happened.

However, Chipotle's tax rate fell to 22.2% last quarter from 36.9% in Q1 2018, mainly due to one-time factors. This drove more than half the company's earnings growth. Chipotle's operating margin -- a metric that excludes taxes and thus captures underlying business performance -- rose just slightly to 8.4% from 8.1% a year earlier. As a result, Chipotle posted an 18.7% increase in operating income last quarter, modestly outpacing its 13.9% revenue gain.

Indeed, the sales-driving initiatives that Niccol has emphasized at Chipotle are limiting its margin expansion potential. Chipotle's investments in marketing and delivery have offset much of its reduction in labor and occupancy costs as a percentage of revenue.

Chipotle's 18.7% operating income growth last quarter is nothing to sneeze at. Furthermore, the company's margin expansion could accelerate when it laps the recent period of investment.

However, revenue still isn't growing as fast as it did prior to the late-2015 E. coli outbreak. That's largely because Chipotle has slowed its expansion. As recently as 2016, the company grew its restaurant count by 12%. By contrast, its 2019 guidance implies a roughly 6% increase in its restaurant count. And the year-over-year revenue benefit from Chipotle's various growth initiatives is likely to moderate over the next year or two.

That makes margin expansion all the more important for justifying Chipotle's lofty valuation. (After rallying nearly 60% year-to-date, Chipotle stock trades for more than 50 times the company's projected 2019 earnings.) Yet the company still doesn't seem to have a plausible path to getting its operating margin back to the high-teens levels that it used to achieve routinely.

In the short term, Chipotle stock could rise further if the fast-casual pioneer continues to report strong growth in comp sales and EPS. But I am skeptical that it will be able to deliver the level of long-term earnings growth necessary to drive continued stock outperformance over the next five years or more. As a result, I recently sold the last of my Chipotle shares.