Please ensure Javascript is enabled for purposes of website accessibility
Log In Help Join The Motley Fool
Free Article Join Over 1 Million Premium Members And Get More In-Depth Stock Guidance and Research
By John Ballard - May 1, 2019 at 10:17PM

Which of these two wireless technology companies should you buy?

The Internet of Things (IoT) and connected cars are two megatrends that promise massive growth opportunities for certain chip companies. Sierra Wireless (SWIR 3.07%) and Cypress Semiconductor (CY) are two chip makers that stand to benefit as both companies make essential wireless technologies used in cars, wireless devices, and other products for the deployment of IoT.

But which stock should you buy today? Let's find out. 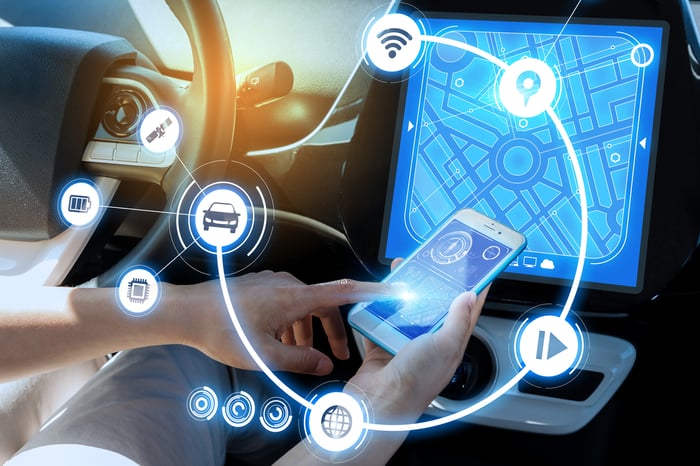 Sierra makes various wireless products, such as embedded modules, WiFi and Bluetooth combos, and other networking technology to help companies get set up with IoT. The growth opportunities in IoT have attracted several chip companies, making the market very competitive, which is why Sierra hasn't made a consistent profit. As a result, over the last five years, the stock is underwater by 36% even though revenue has nearly doubled.

The company's new CEO, Kent Thexton, who took over in October 2018, is on a mission to increase Sierra's recurring revenue from IoT services and solutions, which now makes up 26% of revenue following the acquisition of Numerex. IoT Solutions is a fast-growing $10 billion market, and management believes Sierra's differentiated device-to-cloud value proposition will help the company capture a healthy share of that opportunity.

Sierra will continue to invest in new wireless technologies, such as the mass deployment of low-power wide-area networks (LPWA), 5G LTE, and 5G New Radio over the next few years. During the fourth-quarter conference call, Thexton stated that "LPWA modules will lead to mass IoT adoption, with industry volumes growing several hundred million units annually over the next three to five years, and that 5G is going to have a meaningful impact starting in 2022."

Sierra is also gaining business in automotive, but that is a lower-margin business and is highly competitive, with larger rivals such as Texas Instruments and NXP Semiconductor jockeying for position.

Analysts currently expect revenue to decline by 0.5% in 2019, as Sierra deals with the impact of China tariffs and weakness in the networking segment. Embedded broadband products, which were nearly half of total revenue last year, will see lower sales in 2019. Plus, new automotive products are not expected to ramp up until later in the year.

However, if management is successful in growing the IoT solutions segment, this could prove to be a great time to consider buying shares. The stock currently trades at a forward P/E of 17.3 times next year's earnings estimates.

Cypress is a leading manufacturer of essential chip products that help cars and smart-home devices stay connected. Cypress claims to be No. 1 In IoT Wi-Fi/Bluetooth combos, USB solutions, and USB-C controllers. Cypress is also a leader in touch controllers for infotainment systems in cars, auto instrument cluster microcontroller units (MCUs), and auto NOR flash memory.

One of the main differences between Sierra and Cypress is that Cypress has been a more consistent performer where it counts -- on the bottom line. While both companies report lumpy results in GAAP net income, Cypress has been much better at generating free cash flow. This has given investors a good reason to buy the stock, which is up 79% over the last five years. 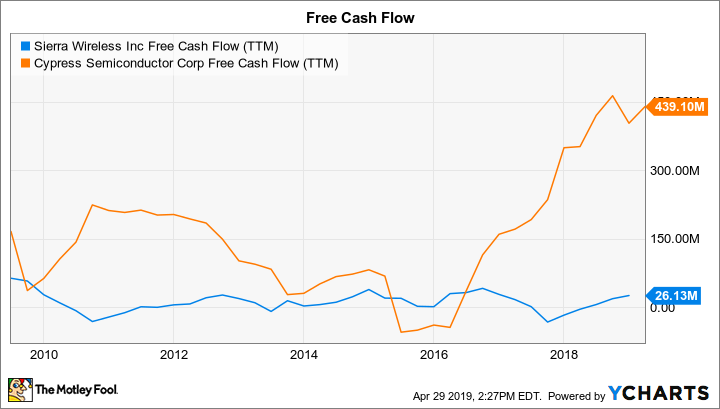 Cypress' two areas of focus are the IoT and automotive markets, which comprise 85% of the company's research and development expense. Last year, the company sold off its volatile NAND flash memory business to focus on the more profitable auto NOR flash memory market.

Cypress is gaining some ground in the automotive market with its MCUs and connectivity solutions. For the second year in a row, Cypress grew faster than competitors with these products, according to research firm Gartner. In the first quarter, Cypress saw its design wins increase 15% year over year, led by automotive. Management expects its chip content opportunity per vehicle to grow from $93 to $184 over the next five years, as cars become increasingly like computers on wheels.

Like Sierra, Cypress is facing near-term obstacles from China. The company recently experienced weak revenue growth across both automotive and IoT products, but management sees business picking back up as early as the second quarter.

The stock trades for a forward P/E of 14 times next year's earnings estimates -- lower than Sierra's valuation. An additional benefit of buying Cypress stock is its above-average dividend yield of 2.95%.

I believe Sierra could prove to be a better buy at some point down the road, especially if management's growth strategy begins to bear fruit. But I think it's too early to buy Sierra stock.

Cypress offers investors plenty of exposure to megatrends like IoT and connected cars while enjoying an above-average dividend yield and a lower valuation. For these reasons, Cypress Semiconductor is the better buy for investors today.