Please ensure Javascript is enabled for purposes of website accessibility
Log In Help Join The Motley Fool
Free Article Join Over 1 Million Premium Members And Get More In-Depth Stock Guidance and Research
By Asit Sharma - May 2, 2019 at 3:45PM

Record earnings and truck shipments highlighted a vibrant start to the year.

Bellevue, Washington-based truck and parts manufacturing behemoth PACCAR (PCAR 1.82%) barreled down the production highway in the first quarter of 2019, much as it did in the previous sequential quarter. The company set both production and financial records in the first three months of the new year. Below, let's dive into the manufacturer's quarterly results, which were released on April 30. Note that in the discussion that follows, all comparative numbers are presented against the prior-year quarter.

What happened with PACCAR this quarter? 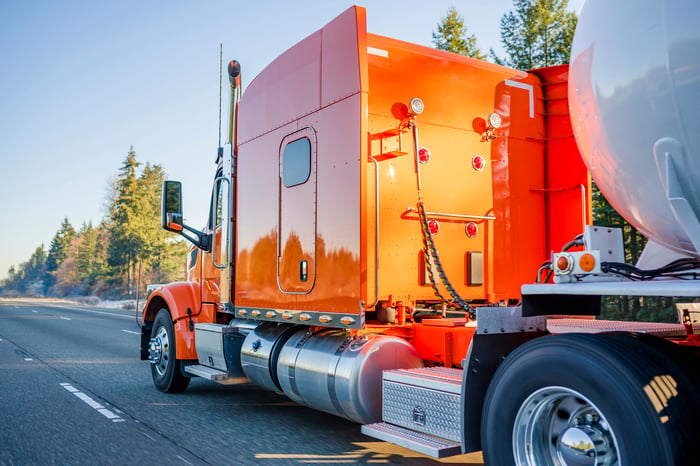 In light of record results, CEO Ron Armstrong took some time to translate the benefit of peak operational and financial performance into shareholder terms during the company's earnings conference call. Armstrong discussed the following beneficial metrics with investors on the call:

PACCAR continues to outperform its peers and provide strong operating cash flow for reinvestment in future growth and distributions to stockholders. One key measure where PACCAR [excels is] return on invested capital. In the first quarter, PACCAR achieved a return on invested capital of 25%. And over the last five years, [it's] achieved an annual average return of 22%.

PACCAR has delivered annual dividends of approximately 50% of net income for many years and has paid a dividend every year since 1941. PACCAR has increased its quarterly dividend an average of 11% per year during the last 20 years and raised another 14% in the first quarter to $0.32 per share.

PACCAR doesn't present formal earnings guidance each quarter. Instead, management focuses on industry trends as an indicator of the company's potential performance. During the earnings call, CFO Harrie Schippers relayed that the company has increased its midpoint projection for the U.S. and Canada Class 8 market to 300,000 delivered units in 2019. Schippers also noted that U.S. industrial production growth is expected to hit 2.6% this year.

Both projections bode well for PACCAR. As I explained in my earnings preview, PACCAR has made several capacity investments to increase its manufacturing throughput and thus fully capitalize on industry growth. The heavy-truck and parts markets are exhibiting sustained momentum; PACCAR's forward earnings will depend in part on the rate at which it can meet brisk demand.