Please ensure Javascript is enabled for purposes of website accessibility
Log In Help Join The Motley Fool
Free Article Join Over 1 Million Premium Members And Get More In-Depth Stock Guidance and Research
By Brian Stoffel – May 2, 2019 at 2:13PM

Here's why free cash flow losses expanded so meaningfully -- and why long-term investors need to be patient.

No one in their right mind would argue that Wayfair (W -5.40%) isn't popular with customers. Five years ago, the company crossed the $1 billion annual sales threshold for its furniture and home goods. In just 2019's first quarter, it eclipsed that mark -- even though the first three months are seasonally the slowest time of the year.

But that growth has come at a steep cost. Wayfair knows that the only way to build a moat around its business is to have a fulfillment network that's second-to-none. The spending to expand that network continued at a breakneck pace to start 2019 -- leading to meaningful losses. 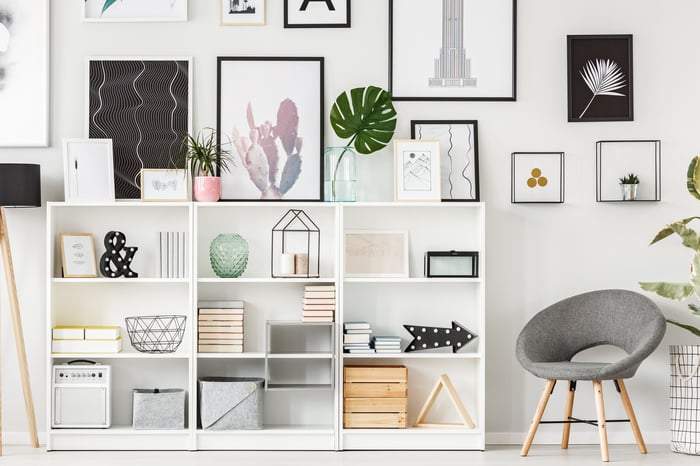 Before we dive into the details of how Wayfair performed during the quarter, let's look at the company's headline metrics.

Of the sales growth, direct-to-consumer sales in the United States jumped 39% to $1.64 billion. International sales, working off a much-smaller base, grew 42% to about $290 billion. The company's Canadian segment slowed notably, but this was offset by gains in the U.K. and Germany -- though specific numbers were not disclosed.

While it's nice to see revenue growing at an almost 40% clip -- faster than management estimated in its forecast three months ago -- investors have every right to be curious about such steep losses. Per-share net losses were 78% greater, and the free cash flow shortfall increased by 248%.

The explanations are twofold. First, operating expenses were much higher: The advertising budget grew 51%, and the catch-all category of selling, operations, technology, general, and administrative expenses jumped 63%. A huge driver of the growth in expenses was an increase in headcount: In just one year, Wayfair increased the number of people it employs by 52%, to 13,344.

Management says this is in an effort to increase total addressable market by offering differentiated products. It spent the majority of the conference call discussing how new product lines were growing quickly. The company has also had to hire many more employees for its new warehouses (covered below).

Those factors reduced cash from operations. When it comes to free cash flow, the losses were compounded by a massive increase in capital expenditures -- jumping 142% to $85 million during the first quarter. This comes hand in hand with the company's signaling that it's going to add 5 million square feet of warehousing space in 2019 -- a 42% increase in just one year.

Long-term investors shouldn't be too surprised by these trends. Wayfair is spending hand over fist to build a fulfillment network specialized for home furnishings -- something that it believes Amazon is ill-equipped to match.

As long as growth in key metrics continues to be brisk, shareholders have been more or less satisfied with the trade-off. Here's how Wayfair performed on those metrics compared to the same time last year.

Management also discussed the popularity of Wayfair's app. It has now been downloaded over 31 million times, and orders via the app account for over 20% of gross merchandise volume. The company expects to continue investing significantly in app development -- especially in augmented and virtual reality.

Wayfair announced that it will open its first brick-and-mortar location in Massachusetts -- near company headquarters -- in late 2019. Management is taking a cautious, wait-and-see approach before deciding whether this will be the first of many such stores, or a one-off experiment.

For the second quarter, management expects revenue to come in between $2.20 billion and $2.25 billion. That would represent growth of 34% to 37%. Within that, U.S. sales are expected to grow 35% to 38%, while international sales are expected to jump 30% to 35%. The slowdown internationally is the result of slower sales in Canada. It should also be noted that international sales growth thus far in the second quarter has trended above 40% -- so investors shouldn't be surprised if Wayfair once again exceeds its own estimates.