Please ensure Javascript is enabled for purposes of website accessibility
Log In Help Join The Motley Fool
Free Article Join Over 1 Million Premium Members And Get More In-Depth Stock Guidance and Research
By Lou Whiteman – Updated May 3, 2019 at 7:42AM

A strong quarter suggests the company's massive restructuring plan is headed in the right direction.

Shares of Ford Motor Co. (F 7.76%) climbed 19% in April, according to data provided by S&P Global Market Intelligence, after the automaker reported first-quarter results that came in well ahead of expectations, giving investors reason to believe the company's ongoing restructuring campaign will bear fruit.

Ford shares were up less than 10% for the month prior to April 25, when the company reported first-quarter earnings of $0.44 per share, easily besting the $0.26-per-share analyst consensus. North America led the way with strong pickup and commercial vehicle sales, and the company's European operations returned to profitability. 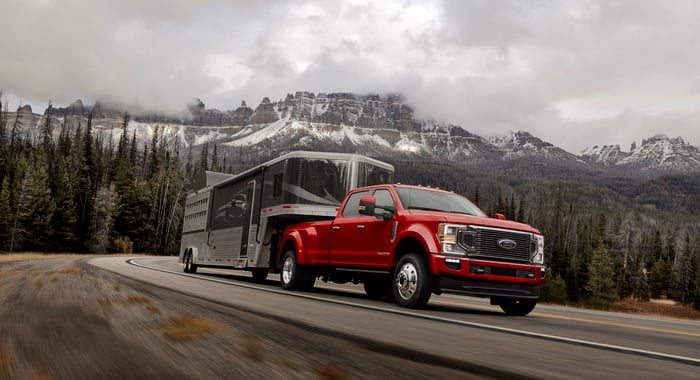 The numbers weren't all great. Ford is still losing money in South America and China, and although Ford is selling a more profitable mix in North America, overall sales there did fall 5%. The company also recorded a whopping $592 million in one-time charges, with most of that total tied to plant closures and other cost cuts in Europe and South America.

Ford through most of the last year was stuck in neutral while it implemented CEO Jim Hackett's restructuring plan. While that work is far from done, Hackett in a statement accompanying the earnings release said that the results show progress.

"With a solid plan in place, we promised 2019 would be a year of action and execution for Ford, and that's what we delivered in the first quarter," Hackett said. "We're pleased with the progress and the optimism that it brings."

The transformation isn't over yet, with the company expecting at least $3 billion in restructuring-related charges throughout 2019. But the company now expects revenue, adjusted-EBIT margin, and adjusted return on investment capital to improve compared to last year.

Ford shares are down more than 23% over the past three years, a period where shares of crosstown rival General Motors are up more than 20%, largely on investor concerns over whether the company can fix the issues with its business and position itself for profitability throughout the cycle.

The job's not done yet, but investors in April, if nothing else, were given some reason to believe.