Please ensure Javascript is enabled for purposes of website accessibility
Log In Help Join The Motley Fool
Free Article Join Over 1 Million Premium Members And Get More In-Depth Stock Guidance and Research
By Lou Whiteman – May 6, 2019 at 6:28AM

Commercial aerospace is holding up better than some had feared.

Aerospace component manufacturer Heico (HEI -2.11%) had a relatively quiet April, with no earnings release or acquisitions in the month to generate excitement. Yet the company's shares still traded up 11.2%, according to data provided by S&P Global Market Intelligence, and seemed to react positively to the results posted by other aerospace vendors that suggested the overall sector is holding up strongly.

Heico is an aerospace roll-up with a long history of outperformance. Since current management took over in 1990, Heico has delivered compounded annual sales growth of 16% and net income growth of 19%. That's come from strong operations and from being a prolific acquirer, having closed more than 70 deals to add a range of certified replacement parts for commercial and defense platforms. 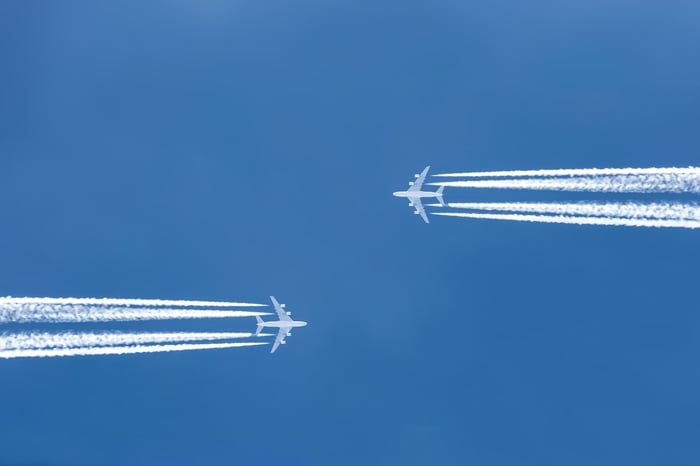 The company's shares had a strong showing in February after it reported its fiscal first quarter results, but investors had been somewhat cautious about aerospace companies headed into April due to fears over the health of the global economy, and uncertainty about how Boeing's 737 MAX issues might weigh on the sector.

Solid results and optimistic commentary by large aerospace manufacturers including United Technologies  and Honeywell went a long way toward putting the market at ease, and rippled through the sector, leading to gains in companies like Heico that didn't report.

Heico is a well-run company with a proven playbook of acquiring niche product lines or companies and driving efficiencies and margins higher. The company's exposure to the aftermarket, or used parts, business should also help it to hold up better in the event the aerospace cycle eventually turns south.

However, investors pay up for that expertise. Heico today has an enterprise value that's 31 times trailing-12-month EBITDA, considerably higher than similarly focused TransDigm's 19 times multiple. Heico is so well run that it could continue to drift higher in the months to come, but absent a significant catalyst, I'd be surprised to see it have many more months of double-figure gains similar to April's.