Growth companies have two qualities that often infuriate investors. Namely, their growth is rarely in a straight line and they are rarely cheap because valuations can get frothy due to excessive investor exuberance. With that said, machine vision company Cognex Corporation (NASDAQ:CGNX) and enterprise asset intelligence company Zebra Technologies (NASDAQ:ZBRA) have both had double-digit stock declines recently, and now could be a good time to pick them up, but the question is what about their long-term growth trends? Let's take a closer look.

The machine vision company's management believes it can grow its factory automation revenue at approximately 20% a year over the long term.  Cognex produced growth rates of 17% and 44% in 2016 and 2017, respectively, which certainly supports that idea. However, revenue increased just 5.2% in 2018, and during the recent first-quarter earnings call management estimated that full-year 2019 revenue would come in below the 2018 figure. What's going on? 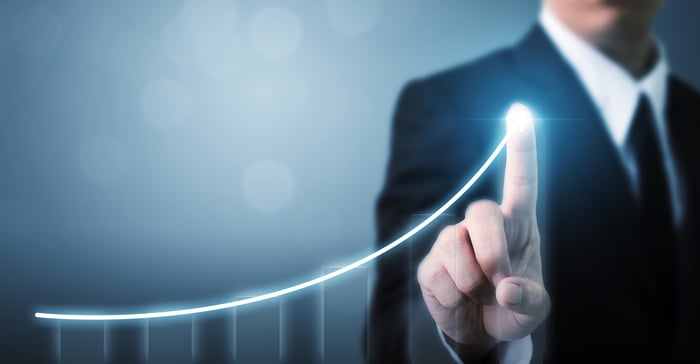 In a nutshell, Cognex has been hit by weakness in two if its larger segments. First, its consumer electronics customers -- Apple is its largest single customer -- held back on capital spending on OLED display and smartphone manufacturing solutions in 2018. Unfortunately, that trend extended into 2019.

Meanwhile, automotive is also set for significant weakness in 2019, with CEO Rob Willett saying during the recent earnings call, "Manufacturers are scaling back and delaying large automation projects."

Of course, Cognex isn't alone in seeing weakness in the automotive sector -- Rockwell Automation (NYSE:ROK) management has lowered its expectation for full-year automotive-based revenue growth from flat to a mid-single-digit decline and then to a drop of 10% in consecutive quarterly results in 2019.

There's little doubt that two of Cognex's key end markets are weak. Even though its logistics end market remains strong, its share of revenue isn't currently enough to offset weakness in consumer electronics and automotive.

On the other hand, global automotive sales and production tend to be cyclical and somewhat contingent on factors such as interest rate cycles, employment gains, and government policies. In other words, they are likely to turn up again, and so will capital spending, particularly on productivity-enhancing solutions such as automation and machine vision.

Moreover, the need for innovation and production of new models -- either through things like electric vehicles and smartphones -- will surely spur investment in Cognex's solutions in the future. Logistics sales -- driven by demand for e-commerce fulfillment -- will also fuel growth.

In short, Cognex remains a company with a bright future; it's just that it's facing a lull in growth in 2019. The stock doesn't look particularly cheap right now, but it's definitely one to keep an eye on with a view to buying on any more significant weakness. 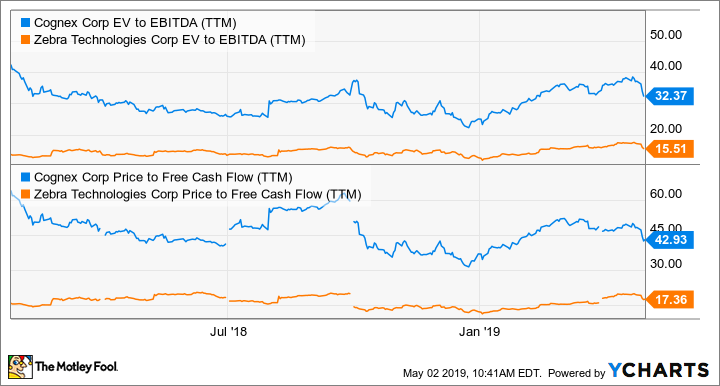 As you can see above, Zebra looks much more reasonably priced than Cognex. It's true that the fellow industrial technology company doesn't have the same long-term growth prospects, but there's nothing wrong with mid-single digit revenue growth  accompanied by margin expansion and increased free cash flow (FCF) generation.

In fact, despite the market's negative take on the recent results, management raised its full-year 2019 net sales growth forecast range to 5% to 8% from 4% to 7%. Adjusted earnings before interest, tax, depreciation, and amortization are now expected to be 21% to 22%, compared with a previous estimate of around 21%. Meanwhile, FCF is expected to be $625 million in 2019, putting the company on a forward price to FCF multiple of 17.8 times -- not bad for a company with double-digit earnings growth.

The case for buying stock in Zebra Technologies lies in the belief that retail/e-commerce, logistics, and manufacturing companies will continue using its barcode scanning and mobile computing solutions to better manage their assets and customer experiences.

As such, it's an interesting play on the shift toward e-commerce and using the Internet of Things (IoT) technology to monitor and track assets -- whether it's a product for shipping in a warehouse, or a product in a supermarket, or inventory in a manufacturing plant.

As to why the recent results were received negatively, one possible reason is that gross margin declined to 47.2% from 47.7% in the same period last year. However, CFO Olivier Leonetti pointed out that last year's gross margin was boosted by an unusually high amount of high-margin business. Leonetti went on to point out that, with gross margin, "we expect Q2 margin to be higher than Q1 of 2019, and we expect the rest-of-the-year margin to be higher than last year."

As such, the recent sell-off looks like an opportunity to buy into a company with strong secular growth prospects.

All told, Zebra looks the safer bet of the two, at least in the near term, but Cognex offers longer-term growth potential. Potential investors in Cognex might want to wait until next quarter to see how the full year is likely to pan out -- Cognex's consumer electronics customers tend to order in the second and third quarters ahead of an increase in production in the fourth. However, now could be a good time to buy stock in Zebra Technologies.