Please ensure Javascript is enabled for purposes of website accessibility
Log In Help Join The Motley Fool
Free Article Join Over 1 Million Premium Members And Get More In-Depth Stock Guidance and Research
By George Budwell - May 7, 2019 at 9:00AM

Atara Biotherapeutics and Exelixis might be top takeover targets for the biotech giant.

Gilead Sciences (GILD 1.08%) intends to augment its late-stage clinical pipeline and/or product portfolio through a bolt-on acquisition soon, according to comments from newly minted CEO Daniel O'Day during the first-quarter conference call. This decision to focus on business development early on in his tenure is welcome news for the company's long-suffering shareholders.

Gilead has consistently had one of the top cash positions in the industry, but the former management team wasn't particularly eager to dip into this massive war chest that now stands at over $30 billion. Apart from the questionable $12 billion acquisition of Kite Pharma, the biotech's former brain trust relied mainly on small licensing deals and acquisitions to bring in fresh talent. That conservative approach to business development, however, was a key reason it lost a jaw-dropping $85 billion in market capitalization in less than four years. 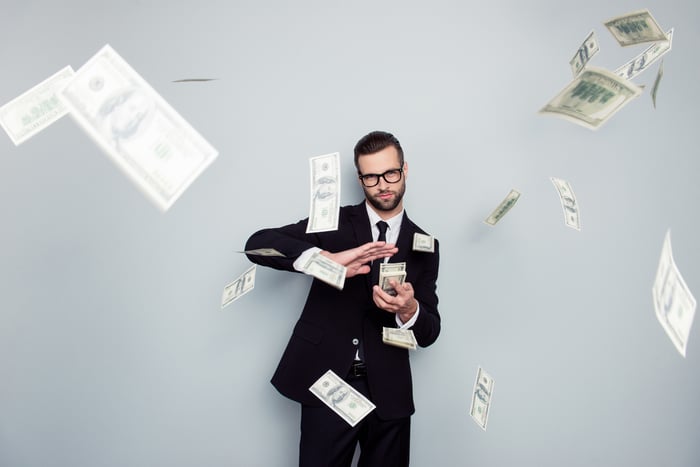 So, where will Gilead choose to spend its mountain of cash? There are only two companies that stand out as a near-perfect fit. Here's what investors need to know right now.

Gilead will dive deeper into oncology

Per O'Day's first-quarter commentary, the biotech plans on strengthening its nonalcoholic steatohepatitis (NASH) pipeline and dive even deeper into the high-growth oncology space. After its late-stage NASH candidate selonsertib missed the mark in a pivotal-stage trial earlier this year, investors were hoping it would pursue a late-stage asset in NASH by acquiring at least one of the following companies: Genfit S.A., Intercept Pharmaceuticals, or Madrigal Pharmaceuticals.

Instead, Gilead cited the need to focus on combination therapies in NASH, resulting in a novel collaboration with Novo Nordisk last April. This move effectively signaled that it's willing to be patient in NASH in order to avoid paying a hefty premium to jump to the front of the line. Thus, a big splash in NASH seems to be off the table for now.

That leaves oncology. Now, Gilead has already made it clear that the company has a deep interest in the field of allogeneic -- or off-the-shelf -- cell therapies. While it does have the capability to go down this path organically, Gilead may not have the luxury to do so.

Atara Biotherapeutics (ATRA -5.82%) is nearing two pivotal-stage readouts for the off-the-shelf cell therapy tabelecleucel. If successful, Atara would sport a key first-mover advantage in this multibillion-dollar space. That's a needle-moving opportunity that Gilead probably won't pass up. So, connecting the dots, Atara is likely at the top of Gilead's wishlist right now.

Investors also shouldn't be surprised if Gilead decides to boost its top line and broaden its oncology footprint at the same time with the acquisition of Exelixis (EXEL -0.28%). Exelixis' flagship oncology medication cabozantinib is forecast to break $2 billion in peak sales in the next decade, thanks to a string of late-stage wins in kidney and liver cancer. The drug is known commercially as both Cabometyx and Cometriq.

While cabozantinib isn't exactly a cutting-edge product like adoptive cell therapy, it would nevertheless provide a solid boost for Gilead's top line in the years ahead. Best of all, Gilead could probably snag this company for a song. Exelixis, after all, is currently trading at a sharp discount relative to cabozantinib's commercial opportunity.

Atara's dual phase 3 trials for patients with Epstein-Barr virus associated post-transplant lymphoproliferative disease are slated to read out before the middle of this year. So, this biotech could be the first domino to fall. After all, Gilead probably won't be able to remain patient if tabelecleucel turns out to be the real deal. This is a highly coveted platform that will attract multiple suitors.

On the Exelixis side of the ledger, Gilead could make an offer at any time. Cabozantinib's sales are only expected to grow from this point forward, which should eventually translate to a higher market cap for Exelixis. So, logically, Gilead -- or any other suitor for that matter -- will probably want to issue a tender offer while the price remains reasonable.

But that's where things may get complicated. Exelixis' management might demand a sizable premium for a deal to get done. Gilead has shown a willingness to pay up for oncology assets its covets, but that was prior to O'Day's turn at the helm.

All told, Gilead appears to be gearing up for a few midsized acquisitions to beef up its oncology portfolio. Atara and Exelixis are the obvious plays here based on need and overall value. But Gilead may also have other ideas. Stay tuned.