Please ensure Javascript is enabled for purposes of website accessibility
Log In Help Join The Motley Fool
Free Article Join Over 1 Million Premium Members And Get More In-Depth Stock Guidance and Research
By Rich Duprey – May 13, 2019 at 4:47PM

It's no surprise that Sturm, Ruger's (RGR 1.95%) reported first-quarter sales tumbled, as the firearms industry remains mired in an unprecedented downturn. Revenue fell 13% to $114 million, while earnings dropped 9% to $0.74 per share.

Yet the gunmaker remains financially solid, having no debt and generating some $52 million in free cash flow over the last 12 months. With a lineup of new products -- a key component of Ruger's growth -- being introduced, the company will be ready when the market turns up again. 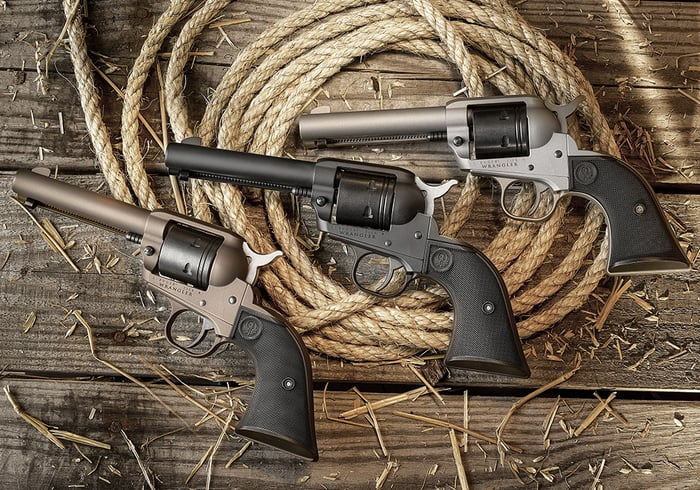 The new Wrangler .22 revolver from Ruger, which it expects will retail under $200. Image source: Sturm, Ruger.

An arsenal of new weaponry

At the annual meeting held in conjunction with the gunmaker's first-quarter earnings release, activist investors addressed the board, urging them to engage with shareholders and to re-consider "smart gun" technology, which only allows an authorized gun owner to operate a weapon. While Ruger said it was formulating a new policy for addressing investor concerns, it reiterated that there is no market for smart guns.

Even though it isn't investing in smart guns, Ruger is still developing new products, which totaled 20% of firearms sales this quarter. It just released the single-action Wrangler revolver in .22-caliber long rifle, a handgun that it expects will retail for under $200, which should be a very attractive price point for consumers. Last year one of the most successful new products Ruger introduced was the Security-9 pistol, which it has now updated with a compact version for concealed carry.

Most gun-market downturns last for a year to 18 months, but the current one is now over 28 months long and counting. It led not only to the bankruptcy of storied firearms maker Remington Arms, but also contributed to the merger of outdoor-gear retailer Cabela's with Bass Pro Shops.

Although there are no signs the slump is over, it may be easing. FBI background checks are down only 1.8% so far in 2019 compared to a year ago. Though the figures as adjusted by the National Shooting Sports Foundation are down significantly more (the NSSF eliminates administrative checks included in the FBI data that don't reflect the actual purchase of a firearm), that may not be as definitive as it appears.

February 2018 witnessed the tragedy of the Parkland school shooting, which caused a sizable increase in the number of people wanting to buy a gun. Adjusted NICS (National Instant Criminal Background Check System) numbers jumped 18% sequentially after the incident, and 10% year over year. So although the decline in background checks persists, it's up against a period that saw elevated buying activity.

The incident also led Ruger shareholders to approve a resolution forcing the gunmaker to assess the financial and reputational risks it faced from its business, and from not offering "smart gun" technology.

Ruger published its report after extensive analysis of the issues; ultimately, it determined it was best served by continuing to build innovative, well-made firearms for consumers. It rejected the call for smart-gun technology, saying there is no market for it among gun buyers.

The activist investors didn't like the report's recommendations and sought to mount opposition to two of Ruger's directors, though it was a symbolic gesture that would have no impact on the actual outcome.

The gunmaker's stock fell 8% after releasing its earnings, though it's regained some of those losses since. It trades at 17 times trailing earnings, but at less than 10 times the free cash flow it produces -- a bargain-basement price. While the industry slump continues to weigh on Sturm, Ruger's performance, its solid financials indicate it is ready to shoot out the lights when the upturn comes.