This merger of giant sporting goods outfitters could drag both of them down.

It's not too late for Bass Pro Shops to back out of its acquisition of Cabela's (CAB). Sure, it was a lengthy and expensive process getting the deal through the Federal Trade Commission approval process, and Cabela's shareholders just approved the $5 billion merger despite the purchase price dropping from the original $5.5 billion offer. While it might cost Bass Pro a pretty penny in breakup fees if it did back out now, it ultimately could be cheaper for the sporting goods retailer in the long run, rather than going forward and cementing the deal.

The two chains are still awaiting approval from the Federal Reserve, which has to sign off on the sale of Cabela's credit card operation, World's Foremost Bank, to Synovus Financial (SNV 0.10%). Between now and Oct. 3 -- the deadline for closing the deal -- Bass Pro Shops can still walk away from making a grave error. It should consider doing so. 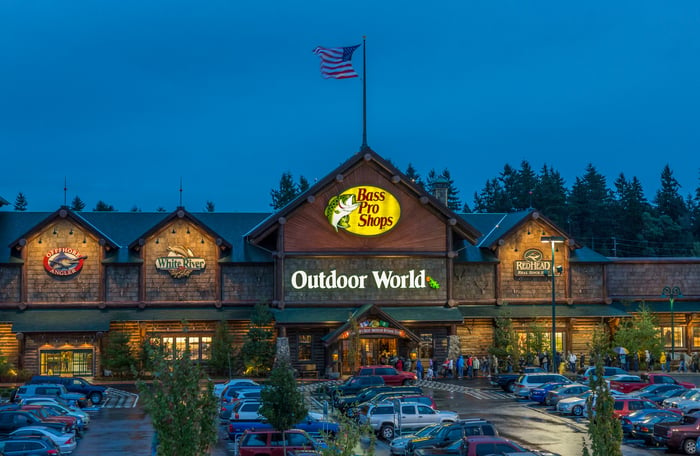 Last Tuesday, Cabela's shareholders overwhelmingly approved the company's acquisition by its rival for $61.50 per share, with 78% of the 54 million ballots cast favoring the deal. And why not? While they were originally getting a 19% premium on their stock from Cabela's closing price on Sept. 30 -- the day before the Bass Pro offer was announced -- they're still receiving a 12% and 31% premium, respectively, from the lowered price.

Bass Pro Shops had originally agreed to buy its rival for $65.50 per share, with the stipulation that Cabela's would sell its bank to Capital One Finance (COF 1.40%) in a separate transaction worth $200 million. However, the credit card issuer ran into a roadblock because it is operating under a consent order from the Comptroller of the Currency as a result of money laundering violations. It announced it didn't think it would be able to get the necessary regulatory approvals in time.

While it looked as though the wheels were coming off the transaction, Cabela's got Synovus to agree to buy the bank and then sell the credit card assets and related liabilities to Capital One -- while keeping the deposits for itself.

At the same time, Bass Pro came back with a new offer for Cabela's, but this time it was a half billion dollars less. Not only was the sporting goods market reeling from the bankruptcies of two giants like Sports Authority and Gander Mountain, as well as smaller companies like Sports Chalet, City Sports, and the parent of Eastern Mountain Sports, but Cabela's own business was also seriously degrading.

Last quarter sales at Cabela's fell 3% to $835 million as same-store sales tumbled 9% on lower firearms and ammunition sales. Worse, internet and catalog sales plunged nearly 13% year over year. It has posted only a single quarter of comp sales growth in nearly four years, and the decline seems to be accelerating again. 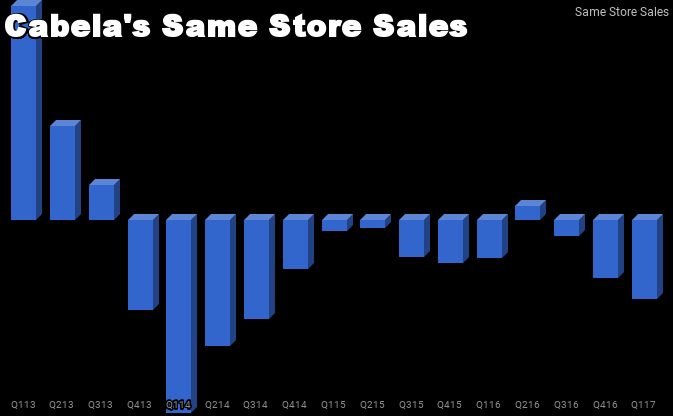 As it's a privately held company, we're not privy to how Bass Pro Shops' business is performing, but one has to assume it can't be escaping from the wreckage of the retail landscape unscathed.

We do know that ratings agency Moody's assigned a lower credit rating to a Bass Pro-secured term loan last November because of the significant risks attached to integrating Cabela's into its own corporate culture, even as it said Bass Pro's outlook was positive because it anticipated the merger to ultimately generate earnings growth.

Yet big mergers sometimes don't work out as intended, as the vaunted synergies often touted fail to materialize. Certainly, there are economies of scale and efficiencies Bass Pro will realize from the merger, but they may be outweighed by Cabela's operations pulling it down.

Going bust in a boom

Over the past few years, the country has seen the gun business boom, yet Cabela's was not able to capitalize on it. It seems to be suffering the same ill effects on its apparel business that every other brick-and-mortar retailer is afflicted with. More troubling is that Cabela's can't get its e-commerce business to gain traction.

Bass Pro Shops may have won the chance to acquire its rival, but it may rue the day when Cabela's shareholders said yes.