Please ensure Javascript is enabled for purposes of website accessibility
Log In Help Join The Motley Fool
Free Article Join Over 1 Million Premium Members And Get More In-Depth Stock Guidance and Research
By Billy Duberstein - May 17, 2019 at 9:25AM

Discovery adds another piece to its “Netflix of golf.”

Discovery, Inc. (DISC.A) (DISCK) (DISC.B) just made yet another move in the game of golf. Investors may not have noticed the development, but for a year, the niche media company has been building out what it hopes to be the "Netflix of golf."

The process started last June, when Discovery inked a 12-year exclusive deal with the PGA Tour, then later announced GOLFTV, a new over-the-top streaming app for golf fans outside the U.S. Discovery followed that up by signing an exclusive deal with Tiger Woods in December. That move seems very smart right now, as Woods miraculously won the Masters championship in early April, his first major tournament win since 2008 -- a full 11 years.

Neither Discovery nor Conde Nast revealed the terms of the deal, but an unidentified source revealed to the New York Times that the final figure was for about $35 million. That's chump change to Discovery, which is a $20 billion market cap company.

Golf Digest was founded in 1950, and has grown to 4.8 million print subscribers, 4.8 million unique digital monthly viewers, and 2.2 million social media followers. Discovery said it would continue to publish Golf Digest, and will retain its top editor, Jerry Tarde. 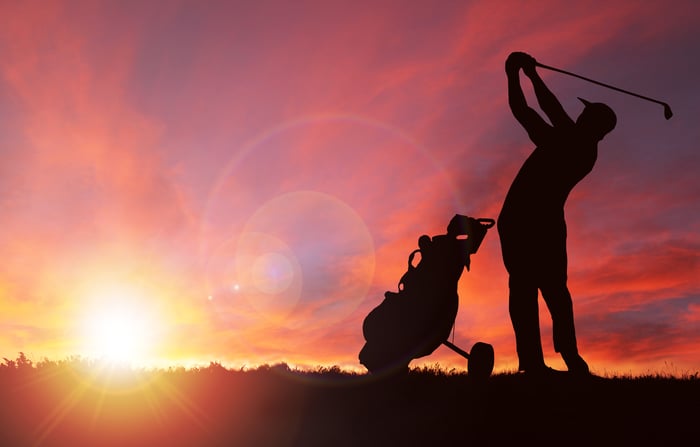 In a way, Golf Digest will augment what Woods was already doing for GOLFTV: instructional videos, along with editorial content on courses, equipment, and behind-the-scenes looks at professional routines. Golf Digest had already been making digital moves: Last year, it launched Golf Digest Schools, where famous teachers like Butch Harmon, David Leadbetter, and Hank Haney give detailed video instruction to students.

Did Discovery get a bargain?

It's hard to say whether Discovery got a bargain, as Conde Nast doesn't break down the economics of each individual magazine; however, Golf Digest was one of three publications that Conde Nast put up for sale last summer, along with Brides and W magazines, as part of a strategic review. The publishing giant encountered a $120 million loss last year as advertising revenues diminished across its print publications.

So, while it's not a great sign that Conde Nast wanted to divest the business, Golf Digest does seem like it's probably a better fit within a more comprehensive media universe like Discovery. Also, if $35 million is the correct figure, that's less than the annual fee Discovery is paying the PGA Tour every year, which is currently $50 million but will increase in the future. In that light, a one-time $35 million payment that significantly expands GOLFTV's content doesn't seem particularly onerous.

Discovery hits it down the middle

The GOLFTV app was launched in early 2019, but CEO David Zaslav said that it was already off to a great start, with high engagement, especially with the Tiger Woods content. While management didn't give specific subscriber figures yet, it did note on its recent conference call that the OTT sports ad revenue helped offset declines in U.S. linear TV ratings.

Perhaps more important, Zaslav said, the new golf product had opened up markets in Asia, such as Japan and South Korea, where Discovery is underpenetrated. Zaslav even went so far as to say that "golf has completely changed the game for us" in the APAC region.

Discovery looks like it has a winner on its hands, though it's still very early days for the GOLFTV app. While management is not giving a whole lot of concrete metrics just yet, remember that Discovery has a lot of experience leveraging international sports already with Eurosport, which the company acquired in 2015.

Moreover, Discovery has now amassed the leading professional tour, the undisputed biggest star in the game, and now the leading golf publication, all under one unified roof -- and all within one year. If this doesn't succeed in signing up just about every passionate golfer outside the U.S., I'm not sure what will.

While many focus on Discovery's declining linear subscribers, investors should monitor not only its newer OTT sports offerings in golf and cycling, but also Discovery's success in getting into skinny bundles and other OTT packages, as cord-cutting dents the company's legacy businesses. Should Discovery manage to execute these newer initiatives and offset those linear cable declines, the stock still appears to be a bargain, trading at just seven times forward earnings estimates.