Although it was a busy Monday on the markets, the after-hours scene isn't so lively. It seems that many investors have digested today's numerous bits of news on the tech scene and in telecoms, so perhaps they're not engaging in post-market trading.

That said, there were some developments that brought a few folks back to their brokerage's websites for some wheeling and dealing. Let's dive right into it. 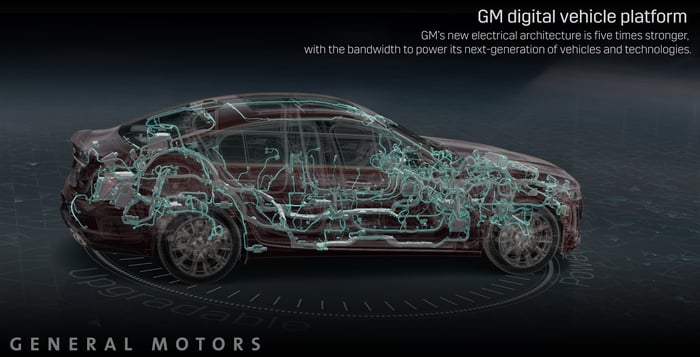 Say this for General Motors (NYSE:GM) -- the company is putting its money where its mouth is.

As it's promised, the giant automaker is driving full speed toward autonomous operation. The latest move reinforcing this is the company's announcement today that it has developed a new digital platform for its cars. This design will be implemented first with the upcoming 2020 Cadillac CT5, and then utilized for other models. GM said most of its vehicles will use it as a base by 2023.

According to GM, cars built on it will be able process as much as 4.5 terabytes of data per hour. That's five times as much as that of the company's current systems. In terms of security the company said it has included "additional protective features" with both the software and hardware in the platform.

This is an important step for GM to be competitive with next-gen vehicles. Investors don't seem overly impressed, however, as the company's stock is down only slightly despite it being one of the most actively traded issues post-market.

Elsewhere in the automotive industry, Ford Motor (NYSE:F) is continuing to slim its employee rolls. According to an internal email from CEO Jim Hackett and cited by various media outlets, the company is to eliminate 7,000 white-collar employees. That amounts to roughly 10% of that segment of its workforce. Eight hundred of those workers are situated in company facilities in the United States.

This comes as little surprise. Job eliminations are part of a turnaround strategy Ford launched several years ago. The company has already made some of the planned culls, including roughly 1,500 workers in the U.S. last year.

The announced white-collar redundancies should save Ford around $600 million annually, according to Hackett. A large, sprawling and in many ways traditional enterprise, Ford has struggled at times to rein in costs and lift profits. At the same time, the auto industry accelerates ever harder toward autonomous operation.

In the email, Hackett wrote, "To succeed in our competitive industry, and position Ford to win in a fast-changing future, we must reduce bureaucracy, empower managers, speed decision making, focus on the most valuable work, and cut costs."

That might be striking a chord with after-hours investors. The stock is up, albeit marginally, in post-market trading.

Coca-Cola: of Africa and bottles

Coca-Cola (NYSE:KO) has decided to keep its No. 1 bottling operation in Africa. The company announced it will retain its majority stake in the business, Coca-Cola Beverages Africa (CCBA), "for the foreseeable future."

This is a reversal of Coca-Cola's strategy of "refranchising," or divesting, its bottling operations throughout the world. The goal was to shift to a "capital light" operation, rather than one saddled with scores of capital-intensive manufacturing facilities.

Previously, Coca-Cola had attempted to refranchise CCBA, which covers 12 countries including Kenya, South Africa, and Uganda. The beverage giant held discussions with "a number of potential partners," but apparently couldn't close an acceptable deal. Coca-Cola did not provide further details on these efforts.