Advances in the artificial intelligence (AI) have resulted in a host of smart devices that respond to voice commands and perform tasks through a combination of natural language understanding and voice recognition. The technology, which was initially just on smartphones, has moved into every room of the house thanks to smart speakers such as the Alexa-powered Echo from Amazon.com (NASDAQ:AMZN), the Google Home from parent Alphabet (NASDAQ:GOOGL) (NASDAQ:GOOG), and the HomePod by Apple (NASDAQ:AAPL).

Though primarily known for its cable and broadband services, Comcast (NASDAQ:CMCSA) has dabbled in voice recognition with its much ballyhooed X1 Voice Remote, which allows the user to change channels, search programs, and get recommendations -- all using voice commands.

Now Comcast wants to incorporate that technology into a device designed to monitor your health. 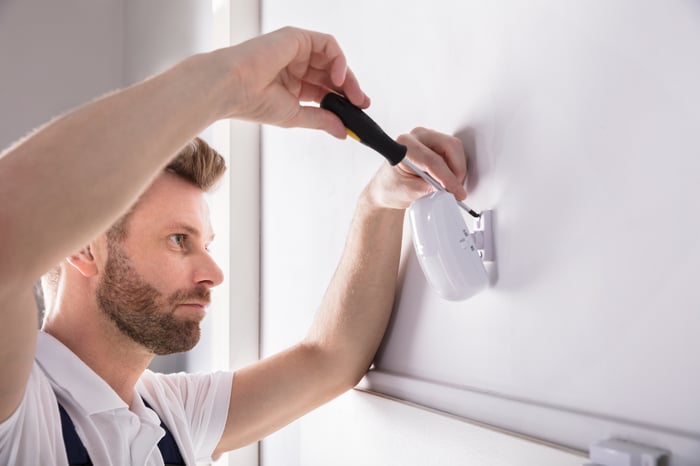 Looking out for your health?

The device would focus on monitoring a number of basic health metrics by way of ambient sensors that would detect if the user was spending an unusual amount of time in bed or perhaps making more frequent trips to the restroom, according to CNBC. Comcast hopes to begin pilot testing the device later this year. The company is also working to develop the capability to detect falls, potentially marketing the device to the elderly and other at-risk customers, like those with disabilities.

Unlike similar devices, it wouldn't be marketed as a way search the internet, play music, or act as a smart home hub, but it would be able to contact emergency services in the event of an incident.

Comcast is also said to be negotiating with several large hospitals, aiming to use the device as a post-discharge monitor, helping to ensure patients don't end up returning to the hospital.

If Comcast wants to get into the health monitoring device market, it already has some tough competition.

The Apple Watch has a growing number of health-related features, including on-board sensors to detect of the user has fallen, as well as monitor the heart rate before, during, and after exercise. Among the device's has more groundbreaking capabilities, the Watch can help detect a potentially dangerous spike in the heart rate, known as atrial fibrillation (or AFib), which can lead to strokes, blood clots, and heart attacks. The device is already subsidized by a number of major insurers for its health-related features. Apple also struck a landmark deal with the U.S. Department of Veterans Affairs (VA) to use its Health Records feature for vets using the iPhone.

At the same time, Google has been in talks with senior housing and assisted-living facilities, seeking to use its Nest home automation and Google Home devices to help the elderly remain independent and in their homes as long as possible.

Amazon has kept most its plans close to the vest, but has reportedly been working with the American Association of Retired Persons (AARP) to collaborate on technology designed to help its aging members. Just last month, Amazon announced that it had developed six Alexa skills that are HIPAA compliant -- meaning they meet the regulatory guidelines for how sensitive health information is transmitted and shared among healthcare providers.

The competition aside, there's another snag Comcast will have to get past if it wants to be taken seriously in the healthcare arena: its less-than-stellar reputation. Comcast has made appearances on lists of the most-hated companies in America, and continues to rack up some of the worst customer service scores around.

It's difficult to comprehend a scenario where an aging person -- or the family that cares about them -- would put their health or trust in a company that is so widely reviled.

Sorry Comcast, I don't see this working out.