Please ensure Javascript is enabled for purposes of website accessibility
Log In Help Join The Motley Fool
Free Article Join Over 1 Million Premium Members And Get More In-Depth Stock Guidance and Research
By Lou Whiteman - May 21, 2019 at 6:02AM

Lawmakers have gone on the offensive against the aerospace part supplier's large profit margins.

Aerospace component manufacturer TransDigm Group (TDG 2.52%) has long turned investors' heads due to its ability generate margins approaching 50% of sales. But the company attracted the wrong kind of attention earlier this month when it was called before Congress to justify the prices it's charging the Pentagon for key parts.

It was an ugly outing that TransDigm management -- and shareholders -- would likely soon rather forget. And there are likely to be consequences, and changes to Washington's procurement policies. But neither the hearing nor the call for action that followed will be fatal blows for this longtime overperformer. Here's why even in an environment of heightened scrutiny, TransDigm can still soar.

"This is not rocket science. This is just wrong."

U.S. Rep. Ro Khanna (D-Calif.), in an opening statement at the May 15 hearing, gave some examples of TransDigm's pricing, including a cost breakdown for part called a quick disconnect coupling half that is used on the F-5 Freedom Fighter and the T-38 Talon jet trainer. The coupling costs TransDigm $173 to manufacture, according to a Pentagon Inspector General's report on TransDigm released earlier in the year, but the company charges the Pentagon $6,986 apiece for the parts.

"We owe it to our service members to give them everything they need to fulfill their missions on the battlefield," Khanna said. "What we will not tolerate is war profiteers -- those who seek to use the fact that we are at war to hold us hostage, and hike their prices on mission-critical defense articles to astronomical levels because they know we have nowhere else to go." Khanna said this sort of pricing puts Pentagon contracting officers "in an impossible position," caught between field commanders demanding spare parts immediately to get their aircraft off the ground, and TransDigm's markups. And that strategy of holding the military over a barrel is, according to Khanna, the foundation of TransDigm's profitability: Its core business model, he says, is to identify small companies with functional monopolies on spare parts, acquire them, and then jack up their prices.

"This is not rocket science," Khanna said. "This is just wrong."

TransDigm in its defense noted that the T-38 has been out of production since the 1970s, and the F-5 since the 1980s -- like a lot of the equipment the company makes components for. Although the planes are still in use today as trainer aircraft, there are no steady production lines, nor inventories of spare parts. The prices per unit, therefore, cover not just raw materials and direct manufacturing costs, but also setting up a production lines.

That explanation is not going to appease Congress. While Khanna is a Democrat, criticism of TransDigm was bipartisan. Sen. Chuck Grassley, an Iowa Republican, in a letter to acting Defense Secretary Patrick Shanahan, said he was "deeply disturbed" by the Inspector General's report that led to the hearing, telling the Pentagon to "resolve this matter before it undermines support for higher [defense budgets]."

Bigger than just the Pentagon

If TransDigm's management is worried about any of this, they've done a good job hiding it. The Inspector General's report only came up briefly on its earnings call earlier this month, with execs noting that it had concluded with "no assertions of any wrongdoing" and a request for a $16 million "voluntary refund."

CEO Kevin M. Stein, when asked about the possibility of changes to its business based on the investigation, said only "those tend to be lengthy processes."

Part of the reason neither management nor investors are hitting the panic button is that for all of the attention these military parts have received, the Pentagon accounts for a relatively small part of TransDigm's total sales. Although the Inspector General's report said defense accounts for about one-third of the company's total revenue, that includes supplies to foreign entities and other non-Pentagon channels. TransDigm estimates that sales to the U.S. government account for between 6% and 8% of its total revenue, including direct sales and sales through distributors.

TransDigm as of 2016 was not one of the top 30 defense contractors, and its Pentagon business tends to be less profitable than other areas. Even if the margins on its sales to the U.S. government were to be cut overnight, the overall impact on profitability would be manageable, and TransDigm would still rank among the most profitable aerospace firms.

While it is possible commercial customers could push back on pricing as well, TransDigm's emphasis on the aftermarket and its reputation for being able to get rare, hard-to-source parts to customers quickly tends to be worth a premium in the marketplace.

Hold through the turbulence

To be sure, TransDigm's trip to Capitol Hill was not a pleasant one, and the bipartisan criticism suggests the company will be in legislators' cross-hairs for some time to come.

The last time these price-gouging accusations surfaced, via a short report from Citron Research back in January 2017, the stock fell 12%. The shares have nearly doubled in the two years since. The market was less alarmist about the accusations this time -- the stock fell only 3% on the day of the hearing. 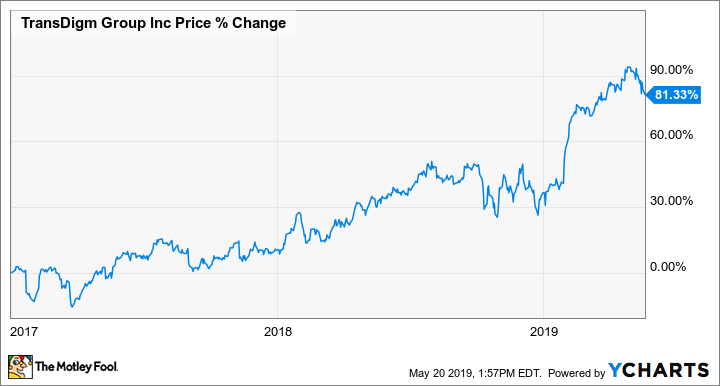 Following the hearing, I expect lawmakers will move more quickly than perhaps TransDigm management is anticipating to rewrite the rules on sole-source procurement, at least requiring more cost information from vendors if not outright capping margins on certain products. That said, I also expect the changes to be manageable, in part because while the Pentagon doesn't want to be overcharged, it also wants ample and timely supplies of the components necessary to keep the nation's arsenal at the ready.

For all the headlines regarding these hearings, how well TransDigm does in integrating its recent $4 billion acquisition of Esterline Technologies will be more important to the company's future valuation than whatever is decided in Washington. Shareholders should buckle up and prepare for additional negative headlines, but there is no reason to pull the eject lever.