Please ensure Javascript is enabled for purposes of website accessibility
Log In Help Join The Motley Fool
Free Article Join Over 1 Million Premium Members And Get More In-Depth Stock Guidance and Research
By Rich Duprey - May 22, 2019 at 3:09PM

As pay rates rise, restaurants are cutting hours and jobs to compensate.

The Fight for $15 labor movement that is trying to force the federal minimum wage to more than double -- from $7.25 per hour to $15 per hour -- is hurting both the workers it purports to represent and the restaurant industry in which many of the people work.

Although the cause hasn't been successful in getting the federal rate lifted, many states and cities took it upon themselves to increase the starting wage. Beginning January 1, more than 20 states raised their minimum wage rate, and only 14 states still have the federal level as their own. 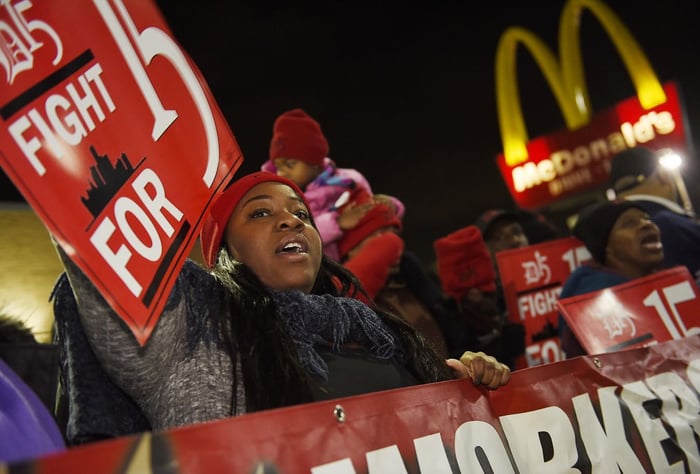 Many businesses also increased their starting pay, including McDonald's (MCD 2.14%), which was pressured into raising pay rates, as well as Shake Shack (SHAK -2.76%), which voluntarily hiked wages.

Yet regardless of the motivations behind the increases, the impact has largely resulted in the same negative consequences.

The law of unintended consequences

A study recently conducted by the restaurant workplace management platform Harri found that to pay for the pay hikes, restaurants raised menu prices, cut worker hours, cut jobs, or in some instances even closed their restaurants down.

The problem was compounded because businesses also had to increase pay for employees who already merited a wage hike as a means of maintaining the delta between skilled, experienced workers and the unskilled, new-to-market employees. As a result, wage hikes have sped up the introduction of more technological solutions to pave the way for eventually eliminating human workers altogether from certain jobs.

It's not a surprising outcome. Basic economics tells us that artificially raising wages without an offsetting increase in productivity hurts a business, which will then need to come up with alternatives for making up the difference.

According to Harri, which surveyed 4,000 restaurants and more than 112,000 employees, nearly three-quarters of the restaurants surveyed raised menu prices, while 45% reworked the menu to accommodate the higher costs. Some 9% closed their restaurants altogether.

In addressing the labor side of the equation, Harri found 64% of restaurants cut hours, while 43% just eliminated jobs. And because restaurants needed to make changes to their operations to compensate for the higher expenses, they ended up seeing a 35% increase in employee turnover. To compensate, 26% of the establishments have introduced more technology.

McDonald's is one restaurant chain at the forefront of technology adoption. Although it insists the introduction of self-ordering kiosks is not because it's trying to eliminate jobs, the fast-food king is enjoying an increase in the amount of food ordered where they have been installed and is rolling them out to even more restaurants. It's also deployed mobile ordering apps, eliminating the need for employee interaction, which increases the accuracy of the orders.

CEO Steve Easterbrook says, "We've created an ecosystem that more and more of our customers are using to order, pay, and receive" their food. The burger giant has also raised prices, up about 2% in the first quarter, after raising them by a like amount last year.

It recently capitulated and said it will no longer support the National Restaurant Association's opposition to a $15 federal minimum wage.

Wendy's (WEN 1.22%) also began adding kiosks to its restaurants and said last year it will roll them out across the company at a rate of 1,000 restaurants a quarter for the next two years. It was also able to increase restaurant margins by 110 basis points to 15% in the first quarter by raising prices and selling more expensive items.

Shake Shack has also introduced new self-serve kiosks and raised prices to offset higher labor costs. And in a portent of things to come, a robotics company in San Francisco last year introduced an autonomous robot that can make a complete burger in five minutes.

After Seattle voted in 2014 to incrementally raise the minimum wage in the city to $15, workers there ended up making $125 per month less than they had been after all the lost jobs and cut hours were accounted for.

New York City, which raised the minimum wage from $13 to $15 at the start of this year, found 75% of restaurants planned to cut the hours of their workers, and almost half expect they will be eliminating jobs too. And that was after 77% of full-service restaurants had already cut hours in 2018, while some 36% cut jobs.

It may sound harsh, but some entry level service jobs like flipping burgers and making fries do not merit higher pay rates. These are meant to be beginner positions where workers learn the requisite skills to move up in the job market and take on new positions that warrant higher wages.

Artificially raising pay will price out potential employees just starting their careers, and in the process, hurt the restaurants who can no longer afford to hire them.