Please ensure Javascript is enabled for purposes of website accessibility
Log In Help Join The Motley Fool
Free Article Join Over 1 Million Premium Members And Get More In-Depth Stock Guidance and Research
By Eric Volkman - May 23, 2019 at 8:43PM

America's big aircraft maker may soon get a reprieve, plus Autodesk and the Hewlett Packards report earnings.

Outside of quarterly results, Boeing (BA -5.07%), it seems, was the focus of some good news from its most important regulator. 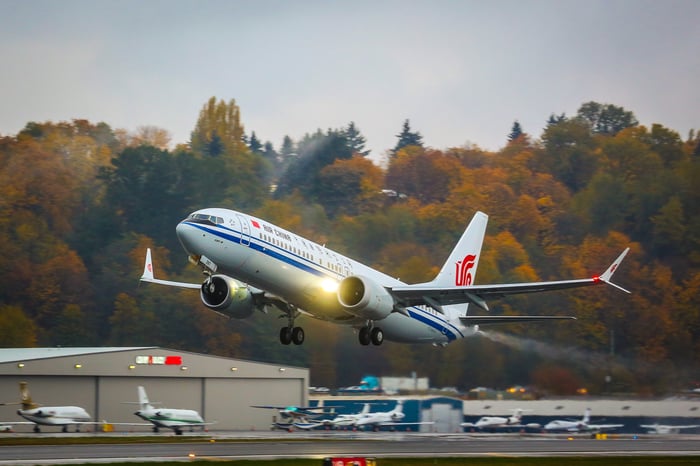 Boeing's controversial plane might be flying again very soon. According to a report from Reuters released in the late afternoon, citing "three people with knowledge of the matter," Federal Aviation Administration (FAA) representatives said that the 737 MAX jets might be allowed to fly domestic routes as soon as late June.

The comments were apparently made in a briefing on the plane that took place in Montreal between the officials from the U.S. regulator and members of the governing council of the International Civil Aviation Organization (ICAO). The ICAO is the United Nations' aviation agency.

Reuters' sources added that there is not yet a precise timetable for the un-grounding to occur.

The 737 MAX was grounded worldwide in March, following two crashes that occurred in close succession with nearly new models of the aircraft. Although the FAA initially defended the plane, it soon followed by grounding it in the U.S.

The FAA, the ICAO, and Boeing have not yet commented officially on the Reuters report.

The company's stock is up cautiously in post-market trading Thursday evening.

Autodesk, maker of popular design software, hasn't gotten off to a pretty start in its fiscal 2020. The company reported Q1 results that didn't meet expectations.

Subscription revenue improved markedly. The company also attributed the overall growth to factors such as the strong performance of its solutions for the construction industry.

In spite of the big improvements, the headline figures were under analyst estimates. On average, prognosticators were modeling $740 million on the top line and a per-share adjusted net profit of $0.47.

Autodesk's Q2 and full-year guidance, however, broadly met expectations. The company predicts it will book $3.25 billion to $3.30 billion in revenue for the latter period, and earnings of $2.71 to $2.90 per share. Analysts have estimated $3.29 billion and $2.83, respectively.

Evening traders don't seem impressed by these numbers. Autodesk shares are down by nearly 9% in after-hours action.

If we go by after-market trading, HP had the better quarter according to investors. Here's the side-by-side scorecard:

For HP, no one product segment stood out as an over-performer, with some declining in revenue and some advancing. In the latter dynamic, commercial revenue increased an encouraging 7%.

Hewlett Packard Enterprise's segment performance was similarly mixed. One bright spot was the company's Aruba wireless networking unit. Its services revenue rose by 16%, although this was partially offset by an 8% decline in its product revenue.

HP is winning the post-market trading race just now. Its stock is up by nearly 3%, while Hewlett Packard Enterprise's is down marginally.