Please ensure Javascript is enabled for purposes of website accessibility
Log In Help Join The Motley Fool
Free Article Join Over 1 Million Premium Members And Get More In-Depth Stock Guidance and Research
By John Bromels – Updated May 24, 2019 at 8:20AM

The industrial rivals are reacting to an underperforming market in two wildly different ways.

The prolonged slump in the gas turbine industry has been a thorn in the side of General Electric (GE -1.96%) for years, and is a major cause of the company's underperformance. Take the most recent quarter, for example, in which GE's Power segment -- which makes the company's gas turbines -- saw its quarterly profit fall 71% year over year to just $80 million. By contrast, the unit's Q1 2017 profits were $797 million.

GE rival Siemens (SIEGY -2.13%) just announced a bold move to deal with the weakness in the gas turbine market. GE also has a "plan" (if you can call it that). Here's what the companies are planning and why their plans are practically opposites. 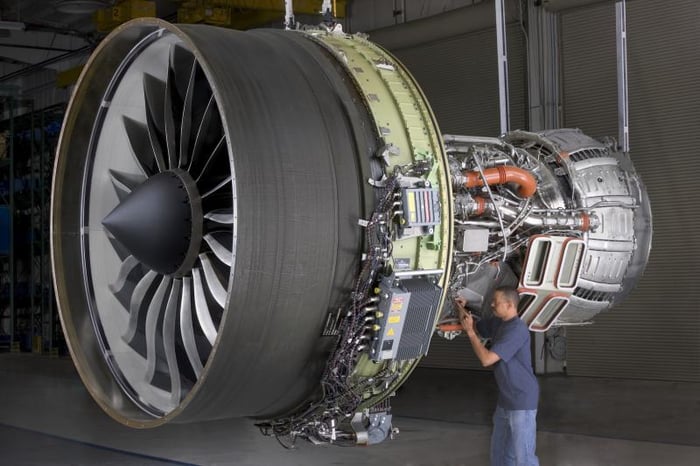 Siemens' gas turbine unit has been experiencing the same kinds of profit declines as GE's. The unit's 2018 profit was down 75% from the prior year. In response to the slumping market, Siemens has decided to go ahead and cut the dead weight. It's spinning off its gas turbine business and expects a public listing in September 2020. The company is also throwing in its other power generation businesses and its controlling stake in wind turbine manufacturer Siemens Gamesa, essentially exiting the turbine business altogether.

Siemens expects to devote more attention to its Smart Infrastructure and Digital Industries units, where it sees the potential for better margin growth than in the stagnant gas turbine market. The company is targeting double-digit profit margins for both units by 2023.

Siemens has had success with the spinoff model in the past. In 2018, it spun off its profitable healthcare business as Siemens Healthineers, but retained an 85% stake in the company. For its power spinoff, though, it's planning to only retain a 25% to 50% stake. Many details of the spinoff are still unknown, but Siemens could clean up its balance sheet by spinning off some of its more than $40 billion in debt along with the underperforming turbine business, to the benefit of the parent company.

General Electric, on the other hand, has an interesting strategy for its own power unit woes: doing nothing.

Well, not exactly nothing. CEO Larry Culp has separated the gas turbine business from the rest of the company's Power unit to form GE Gas Power. Culp has also spoken at length about the need for the unit to improve its performance. For example, on the company's Q4 2018 earnings call, he had this to say:

[W]e need to execute better. Running Power better means improved daily management in how we sell, make, and service our products. ... This is hard work, but I'm encouraged by the Power's team's dedication to proactively address these issues at their root cause. Fixing Power will take time, and in turn will take time for the changes we're making to our daily operations to be reflected in our financial results, but we are improving and I'm confident that those changes will come.

Culp may be confident that change will come, but the company doesn't expect it to come quickly. It's projecting Power's 2019 free cash flows to be down from the negative $2.7 billion the unit recorded in 2018, and still negative in 2020. Operating margins will be positive, at least, in 2019 (unlike 2018's negative 3%), but won't see improvement until 2020...or possibly even later.

This may seem pretty underwhelming, especially when compared with Siemens' bold move. But there's a special consideration GE has here that Siemens doesn't.

Eyes on the skies

GE's biggest outperformer is its aviation segment. While revenue and earnings have been declining sharply in the Power segment, GE Aviation has seen exactly the opposite. Segment profits were $1.7 billion -- yes, billion with a "b" -- in the most recent quarter, and the unit currently sports a profit margin of roughly 20%.

And management sees that trend continuing, according to GE Aviation CEO David Leon Joyce. On the March guidance call, he predicted continuing strong results from the unit: "In '19, we project continued growth in commercial aftermarket; growth in military, equipment, services and development programs. ... And as we look out through '20, we see the trend continuing, led by strong market fundamentals."

This ability to share research and development costs is a big reason these two units may make more sense together than apart...even if GE shareholders have to suffer through some sluggish quarters -- or years -- from Power.

GE is clearly in the turbine business -- be it aviation, gas power, or wind turbines -- for the long haul. Separating out some of the turbine R&D could cause a lot of headaches for the famously integrated company. It's much easier for GE to spin off or sell other businesses, like its healthcare business, and hope for a swift recovery in the gas turbine segment.

But the length of time the company is projecting for a recovery -- potentially two years before recovery even begins -- means GE isn't a compelling place for new investment despite its low share price and outstanding aviation business. Siemens, on the other hand, is worth watching to see how this spinoff plays out.